6.5 Rotational forces – review of moments exerted by forces and torques

You can find a detailed discussion of forces and moments, with lots of examples, in Section 2 of these notes.   Moments and torques don’t come up very often in particle dynamics, but play a very important role in rigid body dynamics. We therefore review the most important concepts related to torques and moments here.

You need to remember, and understand, these ideas:

A solid rod is a good example of a torsional spring. You could take hold of the ends of the rod and twist them, causing one end to rotate relative to the other.   To do this, you would apply a moment or a couple to each end of the rod, with direction parallel to the axis of the rod.   The angle of twist increases with the moment.  Various torsion spring designs used in practice are shown in the picture – the image is from More generally, a torsional spring resists rotation, by exerting equal and opposite moments on objects connected to its ends.  For a linear spring the moment is proportional to the angle of rotation applied to the spring.

The figure shows a formal free body diagram for two objects connected by a torsional spring.  If object A is held fixed, and object B is rotated through an angle θ about an axis parallel to a unit vector n, then the spring exerts a moment 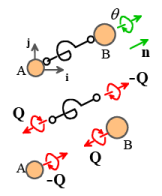 The potential energy of the moments exerted by the spring can be determined by computing the work done to twist the spring through an angle θ .

A potential energy cannot usually be defined for most concentrated moments, because rotational motion is itself path dependent (the orientation of an object that is given two successive rotations depends on the order in which the rotations are applied).