The document Sample Question Paper 1 - Term 1 Science, Class 6 Class 6 Notes | EduRev is a part of the Class 6 Course Science Class 6.
All you need of Class 6 at this link: Class 6

Ques 1: The mineral required for the proper functioning of the thyroid gland is (1)A) IodineB) IronC) CalciumD) PhosphorusAns: ASol: Iodine is required for the proper functioning of the thyroid gland.Ques 2: Hay and grains are eaten by (1) A) Lions B) Cats C) Tigers D) BuffaloesAns: DSol: Buffaloes are herbivores and consume only plant products.Ques 3: Which part of the flower protects it when it is in the bud form? (1) A) Filament B) Stamen C) Sepals D) PetalsAns: CSol: Sepals protect the flower when it is in the bud form.Ques 4: The heart is protected by the (1) A) Ball and socket joints B) Ribcage C) Backbone D) SkullAns: BSol: The ribcage protects the heart, lungs etc.Ques 5: The body of the earthworm lacks (1) A) Muscles B) Bones C) Rings D) Digestive systemAns: BSol: Bones are not present in the earthworm body.Ques 6: Which process is being shown in the image below? (1) 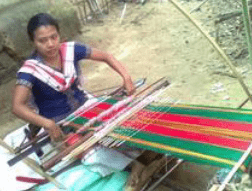 A) Knitting B) Spinning C) Weaving D) CombingAns: CSol: Weaving is a process in which yarn is woven to make fabric. It is done on a loom.Ques 7: From which part of the jute plant is the jute fibre obtained? (1) A) Leaves B) Roots C) Stem D) FlowerAns: CSol: Jute fibre is obtained from the stem of the jute plant.Ques 8: We cannot predict what is kept in a cardboard carton because (1)A) Cardboard is opaque.B) Cardboard is transparent.C) Cardboard is translucent.D) Cardboard is dark in colour.Ans: ASol: Cardboard is opaque, and hence, we cannot see through it. Thus, we cannot say what is kept inside a cardboard carton.Ques 9: Find the odd one out of the following: (1)

Ques 16: Briefly describe the structure of stamen. (2)Ans: Structure of stamen: A stamen comprises an anther and a stalk, called the filament, to which the anther is attached. Anthers are sac-like structures which contain pollen grains.Ques 17: What are omnivores? Give two examples. (2)Ans: Omnivores are animals which eat both plants and animals. For example, human and dog.Ques 18: How will you show the presence of fats in groundnut? (2)Ans: Rub a piece of groundnut against a paper without tearing the paper. Then observe the paper. The presence of an oily patch indicates the presence of fats in groundnut.Ques 19: Which type of joint exists between (2)(i) Upper jaw and rest of skull(ii) Lower jaw and rest of skullAns: (i) Fixed joint(ii) Hinge jointQues 20: You are given a task to make an umbrella. List four materials you will require to make it. (2)Ans: Materials required to make an umbrella are1. Waterproof cloth/plastic sheet2. Wire3. Steel rods4. ThreadQues 21: While measuring the length of a pencil with a scale, one end is at 2.5 cm and the other end at 9.2 cm. What is the length of the pencil in millimetres? (2)Ans: Length of the pencil = reading of second end − reading of first end= 9.2 cm − 2.5 cm= 6.7 cmBut 1 cm = 10 mm∴  6.7 cm = 67 mmSo, the length of the pencil = 67 mm.Ques 22: Explain the process of shadow formation. (2)Ans: When an opaque object is placed in front of a source of light, the light rays cannot pass through it. However, they can bend around the object. So, a dark region in the shape of the object is formed behind the object (the light source being on the other side). This dark region is the shadow of the object. 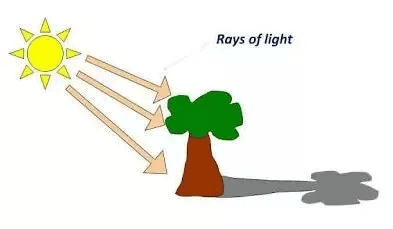 Ques 23: (i) Name the insects which make honey.(ii) How do they make honey?(iii) Where do the insects store honey?(iv) What are honeycombs?Ans: (i) Honey is produced by honey bees.(ii) Bees collect nectar from the flowers of plants and convert it into honey.(iii) The bees store honey in beehives.(iv) The hives containing honey are called honeycombs.Ques 24: (i) How does a flower develop?(ii) How is water transported from roots to leaves?Ans: (i) A flower develops from a bud. Before this development, the young developing petals are protected by the small leaf-like green structures called sepals. The bud later blooms into a full-grown flower.(ii) Water is transported from roots to leaves through the stem.Ques 25: (i) Write the importance of the skull. (ii) What is the function of the discs of cartilage present between the vertebrae of the backbone?Ans: (i) The skull encloses and protects the brain from any injuries or sudden shocks.(ii) The discs of cartilage present between the vertebrae of the backbone allow the vertebrae to move slightly and enable the backbone to bend forward and backward.Ques 26: What is spinning? Explain the process. Also name any two devices used for spinning.Ans: Spinning is the process of making yarn from fibres. Fibres from a mass of cotton wool are drawn and twisted. This helps to bring the fibres together to form yarn.Devices used for spinning are spindle (takli) and spinning machine.Ques 27: (i) What is the importance of oxygen gas dissolved in water? (ii) How is carbon dioxide gas dissolved in water helpful to plants which live in water? (iii) Name two examples of gases which do not dissolve in water.Ans: (i) Oxygen gas dissolves in water. The plants and animals which live in water use the oxygen dissolved in water for respiration. Thus, oxygen gas dissolved in water is important for the survival of these animals and plants.(ii) Carbon dioxide gas also dissolves in water. The plants which live in water use the carbon dioxide dissolved in water for photosynthesis.(iii) Nitrogen and methane gas do not dissolve in water.Ques 28: Which of the following are soluble in water and which are insoluble in water?Groundnut oil, Potassium permanganate, Alum, Wax, Sugar, Sand, Petrol, Copper sulphateAns: Soluble in water: Potassium permanganate, Sugar, Alum, Copper sulphate Insoluble in water: Groundnut oil, Wax, Sand, PetrolQues 29: (i) What are the different types of motion which take place when a car is turning around a roundabout? (ii) What is measurement?Ans: (i) The car and the people sitting inside it are moving in a circle. Hence, their motion is circular motion. The wheels are in two types of circular motion—one about their centre, and the other about the centre of the roundabout.(ii) Measurement is the determination of the dimensions, quantity or capacity of an item.Ques 30: (i) A cricket bat is 11 times longer than the scale in your geometry box. If the length of the scale is 15 cm, what is the length of the cricket bat? (ii) What can you tell about the motion of a raindrop when there is no wind? What if there is a wind blowing?Ans:  (i) The length of the scale is 15 cm.The length of the bat is 11 times the length of the scale.Hence, the length of the bat is 11 × 15 cm = 165 cm.(ii) When there is no wind, the raindrop falls down along a straight line, so its motion is rectilinear. However, when there is wind blowing, the raindrop is carried away while falling downward, so it will have a combination of many motions such as rectilinear, circular, zigzag, rotational etc.Ques 31: (i) What is a pinhole camera?(ii) How does the word F appear in a pinhole camera?Ans: (i) A pinhole camera is a simple camera with no lens and with a single small aperture.(ii) The image of the word F appears as given below. 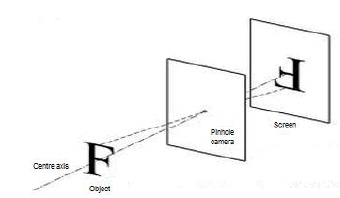