Q.4. For Q. Nos. (i)-(iv) are based on the information given below. Study these information related to answer the questions that follow : Adrenaline hormone is released in the body during stress or emergency situations. It generates several responses which together enable the body to deal with a situation. Given below is a table related to the possible effects of adrenaline hormone on liver glycogen and blood as a result of increased adrenaline secretion glucose.

Q.15. Read the Assertion and Reason carefully and then mark the correct option out of the options given below :    (3 Mark)(a) If both assertion and reason are true and the reason is the correct explanation of the assertion. (b) If both assertion and reason are true but reason is not the correct explanation of the assertion. (c) If assertion is true but reason is false. (d) If the assertion and reason both are false.Assertion : All the organic compounds that are obtained from plant and animal sources are being synthesised these days.Reason : In saturated hydrocarbons, four valencies of carbon are satisfied with the help of single bonds.Ans: (b)Q.16. Identify the acid and base which form sodium hydrogen carbonate. Write chemical equation in support of your answer. State whether this compound is acidic, basic or neutral. Also, write its pH value.ORWhat are amphoteric oxides ? Give an example.Write balanced chemical equations to justify your answer.    (3 Mark)Ans: Acid - H2O3Base - NaOHNaOH + H2CO3 → NaHCO3 + H2OCompound is basic in nature.pH value - ranges between 7 to 10.ORMetal oxides showing both acidic and basic nature.Example: Al2O3/ZnO (or any other)Al2O3 + 6HCl → 2AlCl3 + 3H2OAl2O3 + 2NaOH → 2NaAlO2 + H2OQ.17. Three elements 'X', 'Y' and ‘Z’ having atomic numbers 11, 7 and 6 respectively react with oxygen to form their oxides.(a) Arrange these oxides in increasing order of their basic nature. (b) Give reason for your answer.    (3 Mark)Ans: 11X = 2,8,17Y = 2,56Z = 2, 5(a) Y< Z< X(b) X is metallic in nature hence, its oxide is basic in nature. While Y and Z are non-metals and their oxides are acidic in nature.(In a period, acidic character and basic character decreases.)Q.18.  List four functions of the human heart. Why is double circulation necessary in the human body ?    (3 Mark)Ans: Four functions of human heart are :(i) It receives deoxygenated blood from the body for oxygenation.(ii) Sends the blood to the lungs for oxygenation.(iii) Receives oxygenated blood from the lungs to be supplied to body.(iv) Sends oxygenated blood to various body parts, so that each cell gets energy.Double circulation is necessary for human body. It ensures quick and efficient supply of oxygenated blood to all body parts for meeting higher energy needs and for thermoregulation of body in mammals and birds.Q.19. 'Reproduction is not necessary to maintain the life of an individual, unlike other life processes such as nutrition, respiration or excretion. Still, an individual wastes energy for reproduction. Derive your own conclusion from the above given statement and describe it accordingly.    (3 Mark)Ans: Reproduction is the ability of a living organism to produce new individuals similar to them. Like other essential life processes (nutrition, respiration, growth and excretion), reproduction is not essential to maintain the life of an individual. However, it is essential for the purpose of• continuation of life on the Earth.• addition of new species.• replacement of dead organisms.• transfer of variations from one generation to another.Q.20. What happens to a beam of white light when it gets refracted through a glass prism ? Which colour deviates the most and the least after refraction through a prism ? What is likely to happen if a second identical prism is placed in an inverted position with respect to the first prism ? Justify your answer.ORA student needs spectacles of power - 0.5 D for the correction of his vision. (i) Name the defect in vision the student is suffering from. (ii) Find the nature and focal length of the corrective lens. (iii) List two causes of this defect.    (3 Mark)Ans: The white light splits into seven colours when it gets refracted through the glass prism (VIBGYOR).The colour deviates most - VioletThe colour deviates least - RedColours disappear and again white light is obtained.Q.21. Name the hormone synthesised at the shoot tips. How does it help the plant to respond to light ?    (3 Mark)Ans: Auxin is synthesised at the shoot tips when growing plant detects light and helps the cells to grow longer.When light is coming from one side of the plant, auxin diffuses towards the shady side of the shoot. This concentration of auxin stimulates the cells to grow longer on the side of the shoot which is away from light. Thus, the plant appears to bend towards light.Q.22. List in tabular form three distinguishing features between cerebrum and cerebellum.    (3 Mark)Ans:

Cost of electrical energy consumed by heater in month of April = 150 x 2.5 = Rs. 375Total number of units consumed by 5 electric bulbs in one month,

Q.24. What are solar cells ? Explain the structure of solar panel. List two principal advantages associated with solar cells.    (3 Mark)Ans: Solar cells are the devices that convert solar energy of Sun into electricity.Solar panel consists of a large number of solar cells connected by silver wires. They are made up of special grade silicon. These are mounted on specially designed inclined roof tops so that more solar energy is incident over it.Advantages of solar cells : (a) They have no moving parts, require little maintenance and work quite satisfactorily without the use of any focussing device.(b) They can be set up in remote and inaccessible hamlets or very sparsely inhabited areas.

(ii) Change in colour: The chemical reaction between potassium iodide and lead nitrate.

(iii) Formation of precipitate: The chemical reaction between sulphuric acid and barium chloride.

(iv) Change in temperature: The chemical reaction between quick lime and water.

Q. 26. A compound C (molecular formula, C2H4O2) reacts with Na- metal to form a compound R and evolves a gas which bums with a pop sound. Compound C on treatment with an alcohol A in presence of an acid forms a sweet smelling compound S (molecular formula, C3H6O2). On addition of NaOH to C, it also gives R and water. S on treatment with NaOH solution gives back R and A.Identify C, R, A, S and write down the reactions involved.    (5 Mark)Ans: C — Ethanoic acid.R — Sodium salt of ethanoic acid (sodium acetate) and gas evolved is hydrogen.A — Methanol.S — Ester (Methyl acetete). 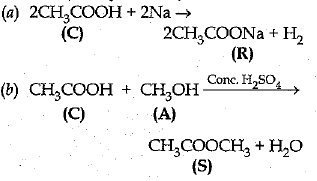 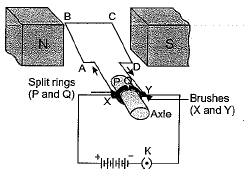 (b) A labelled diagram of an electric motor is drawn here.Q. 28. (i) Bacteria have a simpler body plan as compared to human beings who have a complex body organisation. Does it mean that human beings are more evolved than bacteria? (ii) How can you conclude that birds are closely related to reptiles?Or(i) Study the following cross showing self-pollination in pea plant.Fill in the blanks and answer the questions that follows

(ii) Derive the combinations of characters expected in the F2 progeny? Also write the ratios, (iii) According to you, what is responsible for the inheritance of traits?    (5 Mark)Ans: (i) The terms simple and complex are used to classify organisms according to their evolutionary history. Simple organisms refer to those organisms that have simple structural and functional organisation and are considered primitive, whereas complex organisms refer to those organisms that have higher and complex levels of structural and functional organisation. These are more advanced and said to have arisen from simple organisms. Both bacteria and human beings perform all the activities of life in order to persist in their respective environment. Human beings have a more complex organisation and . differentiation. These features are absent in bacteria. Since, complexity and differentiation develop only through evolution, humans are said to be more evolved than bacteria.(ii) Feathers provided insulation to dinosaurs in cold weather. Later in the evolutionary process, feathers were used for flight in birds. As dinosaurs were reptiles, it means that birds are closely related to reptiles.Or 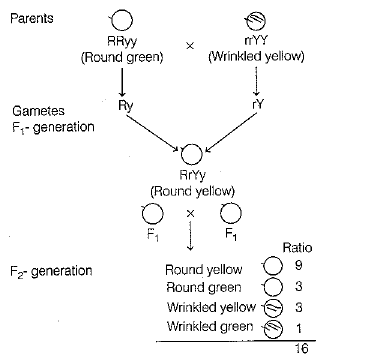 Thus, the combination of characters obtained in the F2-generation and their respective ratios

(iii) Gene is the carrier that leads to the inheritance of traits. It is the part of a chromosome that controls the appearance of a set of hereditary characteristics.Q.29. What is a solenoid? Draw the pattern of magnetic field lines of (i) a current carrying solenoid and (ii) a bar magnet. List two distinguishing features between the two fields.    (5 Mark)Ans: A solenoid is a coil of insulated copper wire consisting of a large number of turns closely wrapped together very tightly into a shape of a cylinder.(i) Pattern of magnetic field lines of a current carrying solenoid: 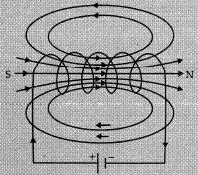 (ii) Pattern of magnetic field lines around a bar magnet: 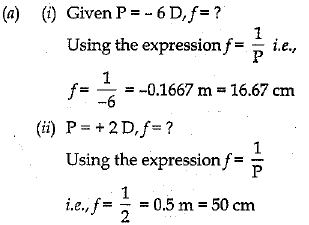 (b) (i) The layers of the earth's atmosphere have different densities and hence different refractive index. This refractive index keeps on changing due to conventional currents in the atmosphere. When light from the star which can be approximated as a point source of light, enters such an atmosphere it seems to change its' position. The light coming from the stars, therefore, presents a quivering (shaking) appearance, thus, giving the impression as if the stars are twinkling.(ii) The stars, although very large as compared to the planets, appear as tiny specks in the sky due to their immense distance from the earth as compared to the huge size of the planets. Thus, the stars appear as point sources of light and the planets appear as a large combination of such sources. Due to its seemingly larger size, the change in the direction of light coming from the planets is negligible as compared to that coming from the stars. Therefore, the planets do not seem to twinkle like stars.