ORHow can we separate cream from milk?  (1 Mark)Ans. By the process of centrifugation.Q.12. Give an example of a uniformly accelerated motion.  (1 Mark)Ans. Motion of a free falling body. 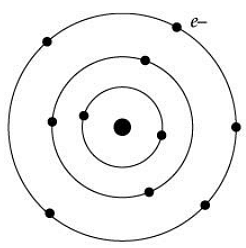 (iv) State True or False: Atomic mass of an element is the sum of the number of protons / electrons and neutrons.(a) True(b) FalseAns. (a)

(i) Explain the above result.(a) It means carbon and oxygen are combined in the ratio of 3:8 to form carbon dioxide. Thus, when there is 3 gm carbon and 50 gm oxygen, then also only 8 gm of oxygen will be used and 11 gm of carbon dioxide will be formed. The remaining oxygen is not used.

(b) It means carbon and oxygen are combined in the ratio of 8:3 to form carbon dioxide. Thus, when there is 8 gm carbon and 50 gm oxygen, then also only 3 gm of oxygen will be used and 11 gm of carbon dioxide will be formed. The remaining oxygen is not used.

(c) It means carbon and oxygen are combined in the ratio of 3:8 to form carbon dioxide. Thus, when there is 8 gm carbon and 50 gm oxygen, then also only 3 gm of oxygen will be used and 11 gm of carbon dioxide will be formed. The remaining oxygen is not used.

(d) It means carbon and hydrogen are combined in the ratio of 3:8 to form carbon dioxide. Thus, when there is 3 gm carbon and 50 gm oxygen, then also only 8 gm of oxygen will be used and 11 gm of carbon dioxide will be formed. The remaining oxygen is not used.Ans. (a)

(ii) Name the law of chemical combination will govern your answer?(a) Law of mass conservation(b) Law of definite proportions.(c) Law of conservation of energy(d) Law of inertiaAns. (b)

(iv) Which postulate of Dalton’s atomic theory is the result of law of conservation of mass?(a) Atoms combine in the ratio of small whole numbers to form compounds.(b) The relative number and kinds of atoms are constant in a given compound.(c) Atoms of different elements have different masses.(d) Atoms can neither be sub divided, created nor destroyed.Ans. (d)

(v) Name one more compound which can be formed by combining carbon and oxygen.(a) Carbon disulphide(b) Carbon monoxide(c) Methane(d) EthaneAns. (b)Q.19. Read the following and answer any four questions from 19 (i) to 19 (v). Study the given figure and answer the following questions. 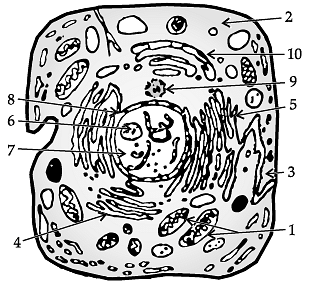 (ii) The function of part labelled as 1 is _________.(a) Release of energy(b) Protein synthesis(c) Transmission of heredity characters(d) StorageAns. (a)

(v) Chromosomes are present in ______.(a) Cell membrane(b) Golgi apparatus 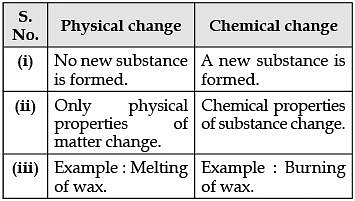 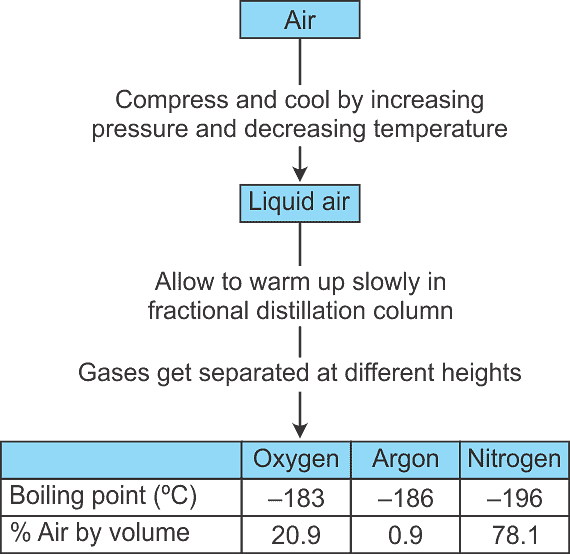 Q.23. Classify the following as pure substance or a mixture. If mixture, indicate whether homogeneous or heterogeneous .(i) 24-carat gold(ii) Air  (2 Mark)Ans. (i) 24-carat gold is a pure substance.(ii) Air is a homogeneous mixture in which the constituents are uniformly distributed throughout without any clear boundary of separation.ORGive two reasons to support the statement that CO2 is a compound and not a mixture.  (2 Mark)Ans. (i) As compounds contain two or more elements combined in a fixed proportion, carbon and oxygen are present in a fixed ratio of 3:8 by mass in carbon dioxide.(ii) As compounds can be broken down into simpler substances by chemical or electrochemical methods, the constituents of carbon dioxide cannot be separated by simple physical methods.Q.24. A gun of mass 500 g fires a bullet of mass 10 g with a speed of 100 m/s. Find:(i) Initial momentum of ‘gun + bullet’.(ii) Momentum gained by the bullet after firing.  (2 Mark)Ans. (i) Zero (both are at rest ).(ii) Momentum gained by bullet.

Q.27. You are provided with mixture of camphor, common salt and soil. Using various techniques how will you separate the components of this mixture? Write the various steps involved.  (3 Mark)Ans. (i) First, heat the mixture. As camphor is sublimable, it will vapourize and so it can be separated through sublimation. 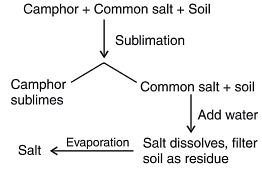 ORDescribe an activity with labelled diagram to obtain dye from blue ink. Name the component which gets evaporated.  (3 Mark)Ans. 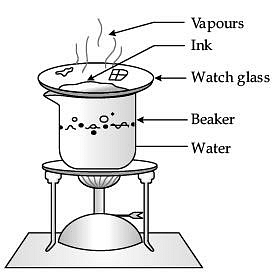 Q.28. What are the three limitations that hinder the approach to deal with infectious diseases?  (3 Mark)Ans. The limitations are:

Q.29. (i) You are given a mixture of mustard oil and water. Name the process that can be used to obtain mustard oil from the above mixture.(ii) Draw a well labelled diagram of the above process.  (3 Mark)Ans. (i) Process: Using separating funnel.(ii) 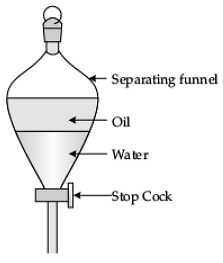 Q.30. Same drug does not work against the microbes belonging to different groups. Why? State the mechanism of antibiotics in killing bacteria.  (3 Mark)Ans. Every micro-organism has its own biochemical cycle. So one type of antibiotic can stop or block biochemical cycle of one type of microorganism only, but not all types of microorganisms. Antibiotic, destroy the cell wall during the asexual reproduction cycle; hence, the bacteria can be easily killed.Q.31. Four persons jointly lift a 250 kg box to a height of 1 m and hold it. (i) Calculate the work done by the persons in lifting the box. (ii) How much work is done for just holding the box? (iii) Why do they get tired while holding it ? (g = 10 ms–2)   (3 Mark)Ans. (i) F = 250 × 10 = 2500 Ns = 1 mW = F × s = 2500 × 1= 2500 J(ii) Zero, as there is no displacement.(iii) To hold the box, men are applying a force which is opposite and equal to the gravitational force acting on the box. While applying the force muscular effort is involved, and so they feel tired.Q.32. A cyclist goes around a circular track of diameter 105 metres in 5 minutes. Calculate his speed.  (3 Mark)Ans. Here, diameter = 105 m, radius (r) = 105/2Time taken t = 5 × 60 = 300 sSpeed, v = 2πr/t =