Q.3. In 1885, the Court of Directors sent Wood’s Despatch, which emphasised European learning benefits. Select the best option:(1) It would introduce Indians to European ways of life.(2) English education would change the tastes and desire of Indians.(3) It would create a demand for British goods.(4) It would supply the Company with civil servants.(a) A, B, C(b) B, C, D(c) A, C, D(d) A, B, C, DAns: d

Q.6. Mahatma Gandhi strongly felt that: (1) Indian languages should be the medium of teaching.(2) Western education was focused on reading and writing rather than oral knowledge.(3) Students should learn handicraft.(4) English education in India failed to communicate with the masses.(a) A, B, C(b) B, C, D(c) A, B, C, D(d) A, C, DAns: c

Q.13. What is Zero Hour?Ans: Zero hours begins at 12 o’clock in the afternoon and after question hour.

Q.14. A Lok Adalat is generally presided over by the: (a) Retired judge(b) Governor of the state(c) Chief Minister of the state(d) Judge of the District CourtAns: a

Q.18. How did Pandita Ramabai help in the upliftment of miserable Hindu women?Ans: Pandita Ramabai was a great scholar of Sanskrit and felt that Hinduism was oppressive towards women and wrote a book about the miserable conditions of upper-caste Hindu women. She founded a Widows’ Home at Poona to provide shelter to widows whose husband’s relatives had ill-treated. Here, women were trained so that they could support themselves financially.

Q.19. When was the Muslim league formed, and what were its demands?Ans: (i) A groups of Muslim landlords and Nawabs formed the All India Muslim League at Dacca in 1906.(ii) The league supported the partition of Bengal. It desired separate electorates for Muslims. The government conceded this demand in 1906.

Q.21. Explain any three measures to stop soil erosion.Ans: The measures to stop soil erosion are:(i) Terrace farming: In this type of farming, terraces are made on steep slopes to grow crops.(ii) Shelterbelts: In an open or farmland, we make the shelter of trees along the side of farmland or an open land.(iii) Contour ploughing: It means ploughing along the contours over the hill.

Q.22. Where was the first textile mill successfully set up in India? What was the reason for its success?Ans: The first successful textile mill was set up in Mumbai in 1854. The reasons for its success were :(i) This place has a warm and moist climate suitable for cotton textile.(ii) The port was situated nearby for importing machinery, and the easy availability of raw material and skilled labour influenced the expansion of cotton textile in Mumbai.

Q.23. Point out the significance of Women Protection Law, 2006.Ans: (i) It recognises women's right to live in a shared household.(ii) The women can get a protection order against any further violence.(iii) Women can get monetary relief to meet their expenses.

Q.24. How do fundamental rights ensure the cultural and religious freedom of minorities?Ans: The minorities like Parsi, Muslims, Sikhs, etc., use the Fundamental Rights to secure themselves. They become the guardian of their cultural content and preserve it in the best way. The Constitution of India guarantees cultural justice to cultural, religious or linguistic minorities. The Constitution makes sure that no majority community will dominate or eliminate them. The Constitution provides them with the freedom to practice their religion.

Q.25. Why is the law to form worker unions/associations necessary?Ans: The law to form worker unions/associations is necessary because by organising themselves into unions, workers can use their combined power to demand fair wages and better working conditions. The trade unions, through their leadership, bargain with the employers on behalf of union members who can negotiate labour contracts with their employers. The most common aim of these organisations is to maintain or improve their employment conditions.

Q.26. What are the events covered in the Modern History of India?Ans: The events covered in the Modern History of India are :(i) Establishment of company rule.(ii) The set up of the British administration system, i.e., land revenue, economic policies, etc.(iii) The first war of India’s independence—The Revolt of 1857.(iv) End of the Mughal Empire. (v) Direct control over India by the British Government.(vi) The new socio-economic reform movement began in India.(vii) The role of National leaders or era of rising of Nationalism.(viii) Freedom Movement and Independence.

Q.28. Write down the advantages of biogas as a source of energy.Ans: The advantages of Biogas include:(i) Shrubs, farm waste, animal and human waste are used to produce biogas for domestic consumption in rural areas.(ii) Decomposition of organic matter yields gas, which has higher thermal efficiency than kerosene, dung cake and charcoal.(iii) Gobar gas plants provide twin benefits to the farmers in energy and improved quality of manure.(iv) Biogas is by far the most efficient use of cattle dung. It improves the quality of manure and also prevents the loss of trees.

Q.30. Write a few lines on Right to Equality.Ans: According to  the Indian constitution, the Right to Equality means:(i) Equality before law.(ii) Equal protection of the law.(iii) Prohibition on discrimination on the ground of religion, caste, race, gender or birth.(iv) Equal access to shops, public restaurants, bathing ghats, etc.(v) Equality of opportunity for all Indian citizens in employment matters.(vi) Untouchability has been abolished, and its practice will be an offence punishable by the law.(vii) The state shall not confer any title, except military and academic distinctions.(viii) No citizen of India will accept any title from any foreign state. So, the ‘right to equality includes every aspect of human life. We can say it is right to prohibit discrimination on caste, religion, birth, gender or race. It contains a theme of an egalitarian society, in which all men are equal as per law and have equal opportunity to develop their personality and potential.

Q.31. Explain the role of the judge in the Indian Judicial Criminal System.Ans: (i) The judge is like an umpire in a game and conducts the trial impartially and in an open court.(ii) The judge hears all the witnesses and any other evidence presented by the prosecution and the defence.(iii) The judge decides whether the accused person is guilty or innocent based on the evidence presented and by the law.(iv) If the accused is convicted, then the judge pronounces the sentence.(v) He may send the person to jail or impose a fine or both, depending on what the law prescribes.

Q.32. (i) On the given political map of India, mark any three major centres of the Revolt of 1857.(ii) On the same map, mark any two major manganese - producing states. 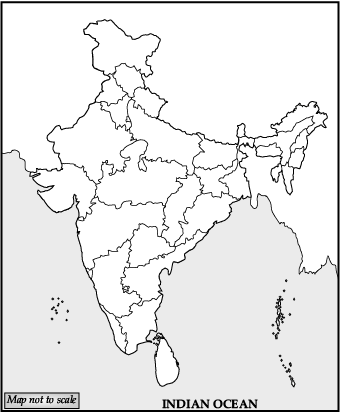 Ans: (i) Three major centres of the Revolt of 1857 were Delhi, Lucknow and Patna.(ii) Two major manganese - producing states are Maharastra and Karnataka. 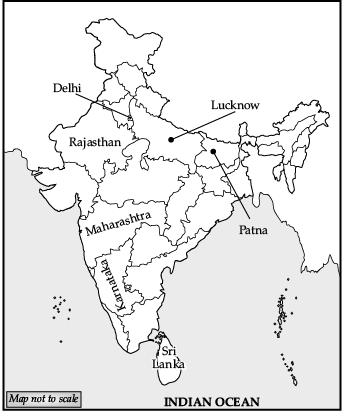