Q.6. A madrasa was set up in 1781 to promote Arabic, Persian and Islamic law. It was established at :(a) Bombay(b) Murshidabad(c) Calcutta(d) LucknowAns: c

Q.8. What do you understand by Patent?Ans: Patent means the exclusive right over any idea or invention.

Q.11. What is life expectancy?Ans: It is the number of years that an average person is expected to live.

Q.12. What is Sovereignty?Ans: Sovereignty means independence and freedom to govern oneself.

Q.13. What is Bicameral legislature?Ans: It is a legislature with two Houses—Upper House and Lower House.

Q.16. Write any three causes of the Battle of Plassey.Ans: Causes responsible for the battle of Plassey are given below:(i) In 1756 A.D., the Nawab seized the English Factory at Kasim Bazar and occupied Fort William, but Clive recaptured it in 1757 A.D.(ii) Mir Jafar wanted to dethrone the nawab and entered into a conspiracy against the nawab, joining the Britishers' hands.(iii) Clive blamed the nawab that he was conspiring against English with the French's help.

Q.17. What were the chief characteristics of Mundas?Ans: (i) Mundas were known by different names in society.(ii) Traditionally, they were the worshippers of Lord Shiva.(iii) Once their society was mother dominated. Now, it is dominated by the father.(iv) They have their own morals.(v) Usually, they are blackish, curly-haired and dwarf in size.

Q.18. Why was Raja Rammohan Roy keen to spread Western education in India?Ans: Raja Rammohan Roy was keen to spread Western education in India because he wanted to ring about greater freedom and equality for women. He was moved because they had to remain indoors, only confined to the home and the kitchen, thereby remaining illiterate.

Q.19. How did the Britishers try to control the Quit India Movement?Ans: (i) The Britishers' first response was severe repression of the movement.(ii) By the end of 1943, over 90,000 people were arrested, and around 1000 were killed in police firing.(iii) In many areas, orders were given to operate machine guns on aeroplanes' crowds.

Q.21. What do you understand by the water cycle?Ans: (i) Freshwater is the most important substance on the earth. It can neither be added nor subtracted.(ii) Its total volume remains constant, but its abundance varies from place to place.(iii) This is because it is in constant motion, cycling through the oceans, the air and the land and back again, through the process of evaporation, precipitation and condensation. The cyclic movement of water between the biosphere's spheres, i.e., lithosphere, atmosphere and hydrosphere, is termed the water cycle.

Q.24. Briefly describe the religious beliefs of Adivasis.Ans: (i) They often are involved in the worship of ancestors, village and natural spirits, associated with and residing in various sites in the landscape—mountain spirits, ‘river spirits, ‘animal spirits, etc.(ii) The village spirits are often worshipped at specific sacred groves within the village boundary, while the ancestral ones are usually worshipped at home.(iii) Adivasis have always been influenced by different surrounding religions like Shakta, Buddhist, Vaishnav, Bhakti and Christianity.

Q.25. What does the Indian Constitution say about the Right to Education, and what is the contradiction in India?Ans: The Indian Constitution guarantees the Right to Education for all children between the ages of 6 and 14. According to this Right, schooling facilities are available to all children impartially.According to an education report, schooling in India continues to be highly uneven.

Q.26. What is a Survey? Give examples of different types of surveys conducted.Ans: (i) Survey means a study or investigation of important facts and figures regarding a particular subject, topic or country for acquiring additional and specific information for further study or investigation.(ii) In the early nineteenth century, detailed surveys were conducted throughout the country in almost all the major fields, such as the topography studying the cropping pattern.(iii) Botanical surveys, zoological surveys, archaeological surveys, anthropological surveys and forest surveys, etc., were conducted to collect necessary information regarding the country.

Q.27. What were the effects of the Revolt of 1857 on India?Ans: Effects of the Revolt of 1857:(i) It brought the Mughal Empire to an end.(ii) The East India Company's rule in India came to an end.(iii) The British Crown took over the control of Indian administration.(iv) Company’s Board of Centre and Court of Director were abolished, and all the powers were transferred to the Secretary of State of India.(v) The British became suspicious of Indians and began to keep themselves confined to their clubs and offices.(vi) The balance and counter check policy was adopted regarding military administration.(vii) Queen Victoria’s proclamation of 1858 promised to abstain from all interference in the religious beliefs of the Indian people.(viii) Indian rulers were given the right to adoptions.

Q.30. What is federalism?Ans: Federalism is a government system in which the power is divided between a central authority and various constituent units of the country. Usually, a federation has two levels of government. One is the government for the entire country responsible for a few subjects of common national interest. The others are governments at the level of provinces or states that look after much of the day-to-day administering of their state. Both these levels of governments enjoy their power, independent of each other.

Q.31. What are the qualifications and tenure of the judge of the Supreme Court of India?Ans: A person is qualified for appointment as a judge only if he/she is a citizen of India and if he/she fulfils one of the following conditions :(i) Has been a Judge of the High Court for at least five years.(ii) Has been an advocate of a High Court for at least ten years.(iii) In the President's opinion, is a distinguished jurist.

The Chief Justice of India and other judges of the Supreme Court hold office until they attain 65. A judge may voluntarily resign before the expiry of his term. In exceptional cases, a Supreme Court judge may be removed before retirement through impeachment.

Q.32. (i) On the given political map of India, mark the three major centres of education during India's British rule.(ii) On the same map, mark any two major copper-producing states. 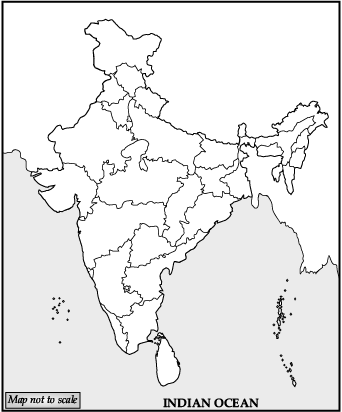 Ans: (i) Three major centres of education during the British rule in India were Bombay, Calcutta and Madras.(ii) Two major copper-producing states are Rajasthan and Madhya Pradesh.