ORWhat are canal rays?  (1 Mark)Ans. The positively charged radiations produced in the discharge tube at low pressure and high voltage are called canal rays.Q.10. Which of the following compounds have polyatomic ions; NaOH, NaCl, Na2O, NaNO3?  (1 Mark)Ans. NaNO3.Q.11. What are stomata?  (1 Mark)Ans. Stomata are the small pores present in the epidermis of leaf.

ORName the two types of plant tissues.  (1 Mark)Ans. Meristematic tissue and permanent tissue.Q.12. What is uniform acceleration?  (1 Mark)Ans. Acceleration of an object is said to be uniform if it travels in a straight line and its velocity increases or decreases (uniform retardation) by equal amounts in equal intervals of time. 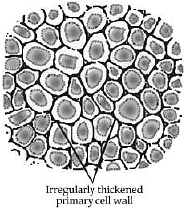 (v) Can you guess the element?  (1 Mark)(a) Ca(b) Mg(c) Fe(d) NaAns. bQ.20. Read the following and answer any 4 questions from 20 (i) to 20 (v).(A) Seema of class IX was having common cold. She sits with Sarika who also develops the disease.(B) Meena of class IX shifted to a new residence, with his family, where water purification system has not been installed yet. She develops cholera and dysentery.

Q.21. Define speed and velocity. Write their SI units.  (2 Mark)Ans. Speed is the distance travelled by an object in a given time. Its SI unit is m/s. Velocity is the speed of an object moving in a direction, or the displacement of an object in unit time. SI unit of velocity is same as speed i.e. m/s.

ORGive the principle of the following technique used in separation of mixture : (i) Centrifugation (ii) Chromatography  (2 Mark)Ans. (i) Centrifugation : Two components having difference in densities can be separated by centrifugation. When the mixture is rotated fast, the lighter particles come to the top and the heavier remain at the bottom.(ii) Chromatography : This method is used to separate a mixture of different dyes. It is based on the difference in solubilities of different solutes in the same solvent.Q.24. What are isotopes? Write three isotopes of hydrogen.  (2 Mark)Ans. Isotopes : Isotopes are the atoms of the same element having same atomic number, but different mass numbers.Three isotopes of hydrogen 1H1, 1H2, 1H3Q.25. State two ways by which you can change a saturated solution to unsaturated solution.  (2 Mark)Ans. (i) By increasing the temperature by heating the solution.(ii) By increasing the amount of solvent.Q.26. Two elements 1H1 and 16O8 form a compound ‘Z’, which is required during the photosynthesis by plants and is necessary for life. (i) Identify ‘Z’.(ii) Write its molar mass.   (2 Mark)Ans. (i) Water(ii) Molar mass of H2O = 2 × 1 + 16 = 18 g mol–1

Q.27. (i) What is the relation between the mass m and the weight w of a body?(ii) What are the differences between mass and weight?   (3 Mark)Ans. (i) Weight of a body is the force of attraction of the earth on that body. This force depends on the mass (m) of the body and the acceleration due to gravity (g).F = m × aF = m × gW = m × gThe weight (W) of the body is directly proportional to the mass of the body.(ii) 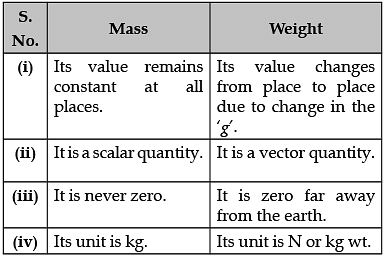 Q.28. A person was bitten by a stray dog. After some days his nature gets irritated, he started fearing water :(i) Name the disease.(ii) Is there any vaccine available?(iii) Is there any plan of your local authority for the control of this disease?  (3 Mark)Ans. (i) Rabies.(ii) Anti-rabies vaccine is available.(iii) Compulsory immunization of pet / dogs with anti-rabies vaccine is available with local authority.Q.29. Identify the type of tissues in the following :  (3 Mark)(i) Vascular bundle (ii) Inner lining of the intestine (iii) Lining of kidney tubule (iv) Iris of the eye (v) Muscles of the heart (vi) Bronchi of lungs.Ans. (i) Complex tissues(ii) Columnar epithelium(iii) Cuboidal epithelium(iv) Involuntary muscular tissues(v) Cardiac muscles(vi) Ciliated cuboidal epithelium.Q.30. (a) What is the relationship between two elements X and Y whose atomic numbers are 18 and 20 respectively, but their mass numbers remain same as 40 ?(b) Which has more number of electrons : Na or Na+ ? Why ?(c) Name the isotope used to treat  : (i) Goitre (ii) Cancer   (3 Mark)Ans. (a) Isobars. (X-Argon and Y-Calcium)(b) Na contains one electron more than Na+. The (+) ve charge indicates that it lost one electron.(c) (i) Isotope of iodine is used in the treatment of goitre.(ii) Isotope of cobalt is used in the treatment of cancer.Q.31. A ball is allowed to roll down from an inclined plane. It reaches the foot of the plane and continues to roll on the ground. It stops after travelling some distance. Is this the violation of law of inertia? Give reasons for your answer.  (3 Mark)Ans. (i) No, It is not the violation of law of inertia. Law of inertia is obeyed only when no external force acts on a body. But in this case the friction due to the ground acts on the ball, so it comes to rest.(ii) Player lowers his hand because by doing so he increases the time in which velocity of ball comes to zero. This decreases the rate of change of momentum and so the impact of force is reduced.Q.32. (i) Write one point of difference between concentration and solubility.(ii) What is the effect of temperature on the rate of solubility? (3 Mark)Ans. (i) Concentration of solution is the amount of solute present in a given amount of solution or the amount of solute dissolved in a given mass or volume of the solvent. Solubility is the maximum amount of solute that can be dissolved in a given solution at a given temperature.(ii) The rate of solubility increases with increase in temperature.Q.33. Give the names of the elements present in the following compounds.(a) Quick lime(b) Hydrogen bromide(c) Baking powder  (3 Mark)Ans. (a) Calcium and oxygen(b) Hydrogen and bromine(c) Sodium, hydrogen, carbon and oxygen

Q.34. (a) What is the name given to the thread shaped structures in the nucleus? Why is it important ?(b) Draw a diagram of the nucleus to show the given parts : (i) nucleolus (ii) nuclear pore(iii) nuclear envelope  (5 Mark)Ans. (a) The thread shaped structures in the nucleus are known as chromosomes. These are important because they contain information for inheritance of features from parents to the next generation.(b)

OR(a) What kind of food is advised when we fall sick and why?(b) Mention any three basic conditions required for good health.  (5 Mark)Ans. (a) (i) We should take bland and nourishing food. Such food does not contain fat, oil or spices, so digested easily.(ii) It provides sufficient energy and nutrients which are required for recovery and regeneration.(b) (i) Balanced diet(ii) Personal hygiene(iii) Clean surrounding(iv) Clean food and water(v) Clean air(vi) Exercises and relaxation(vii) No addiction(viii) Good economic conditionQ.35. Explain Rutherford’s a-particles scattering experiment with diagram and observations.   (5 Mark)Ans. Rutherford bombarded a stream of α-particles on a thin gold foil. 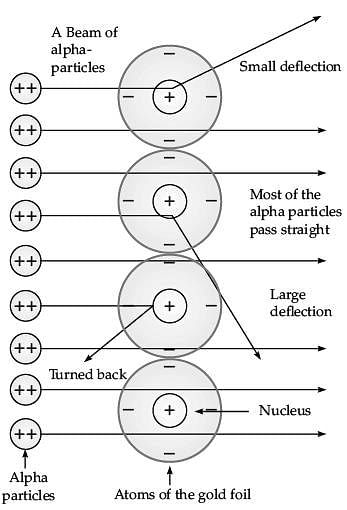 (i) Most of the α-particles passed through the foil without any deflection.(ii) A few α-particles were deflected through small angles and few through larger angles.(iii) The number of α-particles that bounced back was very small.The important conclusions drawn from the experiment are :(i) An atom consists of positively charged centre called nucleus.(ii) The electrons revolve around the nucleus in well defined orbits.(iii) The size of the nucleus is very small as compared to the size of the atom.Q.36.  (i) A sample of vitamin C is known to contain 2.58 × 1024 oxygen atoms. How many moles of oxygen atoms are present in the sample?(ii) Write one word for the following :(a) In a balanced chemical equation, the sum of the masses of reactants and products remains unchanged.(b) A group of atoms carrying a fixed charge on them.(iii) Write chemical formulae of the following compounds :(a) Sodium phosphate(b) Ammonium carbonate   (5 Mark)Ans. (i) Number of moles = Given no. of particles / Avogadro number

(ii) (a) Law of conservation of mass.

OR(i) State the law of conservation of mass. In a chemical reaction 4.2 g of sodium hydrogen carbonate reacted with 3.0 g of ethanoic acid. The products obtained were 4.1 g of sodium ethanoate, 0.9 g of water and 2.2 g of carbon dioxide. Show that these observations are in agreement with the law of conservation of mass.(ii) Define molecular mass. Find the relative molecular mass of calcium chloride. (Given Ca = 40 u ; Cl = 35.5 u)   (5 Mark)

Ans. (i) Mass can neither be created nor destroyed in a chemical reaction.

These observations are in agreement with the law of conservation of mass because in a chemical reaction total mass of reactants is equal to total mass of the products.(ii) The molecular mass of a substance is the sum of the atomic masses of all the atoms in a molecule of the substance.Molecular mass of calcium chlorideCaCl2 = 40 + 35.5 × 2 = 111.0 u