Q.11. Define sex ratio.Ans: Sex ratio is the proportion of males and females in a given population. It is expressed in terms of females per 1000 males.

Q.15. What is meant by ‘Dalit’?Ans: The term Dalit which means broken, is used deliberately and actively by groups to highlight the centuries of discrimination people have experienced within the caste system.

Q.16. ‘‘Battle of Plassey is an important landmark in India’’. Comment on this statement.Ans: (i) It marked the beginning of British rule in India.(ii) The British got a foothold from where they were to conquer India's whole eventually.

Q.17. What did Birsa mean when he talked of a ‘Golden Age’?Ans: Birsa meant by the ‘Golden Age’, a satyug (the age of truth). Mundas lived a good life at this age, constructed embankments, tapped natural springs, planted trees and orchards, and practised cultivation to earn their living. They did not kill their brothers and relatives. They lived honestly. Birsa also wanted people to work on their land once again, settle down, and cultivate their fields.

Q.18. Why were most parents apprehensive of sending their girls to schools in the earlier days?Ans: Most parents were apprehensive of sending their girls to school because they feared that schools would take girls away from home and prevent them from performing their domestic duties. Moreover, girls had to travel through public places to reach school. Many people felt that this would have a corrupting influence on them. They felt that girls should stay away from public spaces.

Q.19. What was the result of the partition of Bengal?Ans: The partition of Bengal infuriated people all over India:(i) All Congress sections – the Moderates and the Radicals, as they were called, opposed it.(ii) Large public meetings and demonstrations were organised, and novel methods of mass protest were developed.(iii) The struggle that unfolded came to be known as the Swadeshi movement, strongest in Bengal but with echoes elsewhere. In deltaic Andhra, for instance, it was known as the Vandemataram Movement.

Q.20. Write down the six basic principles of sustainable development.Ans: The six basic principles of sustainable development are :(i) To respect and care for all forms of life.(ii) To improve the quality of human life.  (iii) To conserve the earth’s vitality and diversity.(iv) To minimise the depletion of natural resources.(v) To change the personal attitude and malpractices towards the environment.(vi) To encourage communities to care for their own environment.

Q.21. Name the nuclear power stations in India.Ans: (i) Kalpakkam in Tamil Nadu.(ii) Tarapur in Maharashtra.(iii) Narora in Uttar Pradesh.(iv) Ranapratap Sagar near Kota in Rajasthan.

Q.22. What factors contribute to the success of Tata Iron and Steel Company?Ans: (i) TISCO is located in Sakchi, Jamshedpur and has many geographical benefits. This place is only 32 km away from Kalimati station on the Bengal—Nagpur railway line.(ii) It is close to the iron ore, coal and manganese deposits and Kolkata, which provides a large market. TISCO gets coal from Jharia coalfields and iron ore, limestone, dolomite and manganese from Odisha and Chhattisgarh.(iii) The Kharkai and Subarnarekha rivers ensure sufficient water supply.

Q.24. What has legal measure been taken by the Indian Government against the practice of untouchability?Ans: (i) The practice of untouchability is a form of social discrimination against certain groups based on their castes. India has been a severe victim of this social evil for ages.(ii) Framers of the Indian Constitution were unanimous on making a strong law to end this inhuman practice.(iii) Article 17 of India's Constitution declares abolition of the practice of untouchability. By the Constitutional provisions, the Government of India has passed the Untouchability (Offences) Act, 1955 and later the Scheduled Caste and Scheduled Tribes (Prevention of Atrocities) Act, 1989 eradicate caste-based discrimination and upliftment of the people belonging to deprived sections of the society.(iv) The government has introduced the reservation system in educational institutes, government services and elected institutions.

Q.26. Describe how the Britishers started the essential procedure of writing the history.Ans: (i) Literary sources prove to be most important in gaining knowledge about past events.(ii) The Britishers laid the foundation of keeping records of every plan, policy, decision, instruction, agreement and treaty, etc.(iii) They started preserving important written documents such as letters, memos, etc.(iv) Record rooms were established across all the important offices in rural and urban areas.(v) Later, archives and museums were established to protect these records and documents from being accessed in the future.

Q.29. Explain the climatic conditions and types of soil for growing wheat briefly. In which countries it is mainly grown? What is its distribution pattern in India?Ans: The climatic conditions required for wheat cultivation are:(i) It grows well in the areas where the moderate type of precipitation occurs.(ii) In the growing season, the climate should be cool and moist and warm, and it should be dry at the time of ripening.The types of soil in which wheat can grow best are:(i) It is grown in well-drained alluvial soil.(ii) Wheat grows well in a fertile loamy soil.(iii) Medium and heavily textured with lime content soil is good for wheat growth.Distribution of Wheat: It is mainly grown in Australia, Argentina, China, India, Russia, Ukraine and the USA.In India, wheat is grown in the winter season, in north-western, north and central areas. Punjab, Haryana, Madhya Pradesh, Uttar Pradesh, Maharashtra and Bihar are the main wheat producers.

Q.30. How can you differentiate Indian Secularism from the rest of the world?Ans: (i) In India, the objectives for secularism laid down by India's Constitution are the same on some points, but the major difference we find is the clause of State intervention in religious affairs.(ii) This clause allows the State to deal with any issue related to religion, which affects a society broadly.

For example: (a) Indian Constitution intervened in Hindu religious practices to abolish untouchability.(b) In India, the Fundamental Rights are based on secularism.

Q.31. How is the independence of the judiciary implemented?Ans: There are three government organs in our country that include—legislature, executive and judiciary. At the same time, there is the separation of powers which ensures the independence of the judiciary in the following ways:(i) This means that other branches of the State—like the legislature and the executive—can not interfere in the judiciary's work.(ii) The courts are not under the government and do not act on their behalf.(iii) It is also crucial that all judges in the High Court, as well as the Supreme Court, are appointed with very little interference from other branches of government.(iv) It is the judiciary's independence that allows the courts to play a central role in ensuring that there is no misuse of power by the legislature and the executive.(v) It also plays a crucial role in protecting citizens' Fundamental Rights because the citizens can approach the court if they believe that their rights have been violated.

Q.32. (i) On India's given political map, mark the two major centres of chintz weaving in the late 18th century.(ii) On the same map, mark any three major mica - producing states. 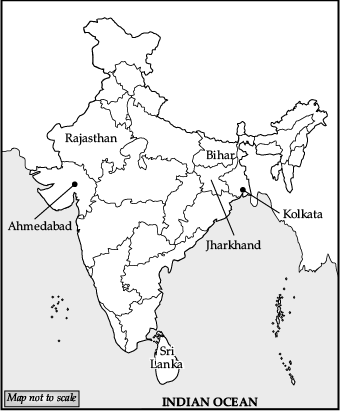