Q.3. Who said ‘a single shelf of a good European library was worth the whole native literature of India and Arabia’? (a) Thomas Macaulay(b) Warren Hastings(c) Lord Wellesley(d) James MillAns: a

Q.5. As the price of indigo was very high, the Europeans depended on another plant called: (a) Woad(b) Sal(c) Palash(d) JuniperAns: a

Q.6. He was a Scottish missionary who helped to establish the Serampore Mission. Who was he ?(a) William Adam(b) William Carey(c) Thomas Macaulay(d) James MillsAns: b

Q.10. Which one of the following statement is not correct?(a) While smelting, heating is done beyond melting point.(b) The Iron and Steel Industry is known as backbone industry.(c) Milk dairies like Mother Dairy are joint sector industries.(d) Alloying with other elements changes the properties of steel.Ans: c

Q.15. State True or False : 45 per cent of tribal groups in rural areas and 35 per cent in urban areas live above the poverty line in India.Ans: False

Q.16. What do you know about the policy of non-intervention?Ans: The East India Company ’s policies in India came to be criticized in British parliament and it was felt that the Company had no right to interfere in the internal affairs of the Indian states. So, the Company made the policy of not intervening in the affairs and disputes of Indian states. However, the Company did not follow this policy. The company interfered when it suited them and when time favoured them.

Q.17. What were the causes of Santhal Rebellion?Ans: Causes responsible for Santhal Hul (Rebellion):(i) With the introduction of the permanent land settlement system, the Santhals were deprived of their ownership of land.(ii) They were obliged to pay excessive land revenue to the Britishers.(iii) Due to the strict land revenue system, local chiefs were evicted from the land and their land was purchased by zamindars.(iv) Interference of the Christian missionaries in the socio-religious life of the tribals also added to their misery.

Q.18. How did women, by the end of the 19th century contribute/participate for reforms?Ans: By the end of the nineteenth century, women actively participated in reform movements. They wrote books, edited magazines, founded schools and training centres, and set up women’s associations.

Q.19. What was the Rowlatt Act ?Ans: (i) The Rowlatt Act was introduced by the British in 1919.(ii) According to this act, any Indian could be arrested without trial in the court of law.(iii) The act curbed fundamental rights such as the freedom of expression and strengthened police powers.

Q.20. Explain briefly with examples how resources are classified.Ans: Generally, resources are classified into three groups : Natural, human-made and human resources.(i) The resources which are obtained from nature and used without making much change or modification are called as natural resources. For example, air, water, soil, etc.(ii) When the original form of natural substances is changed to make them more useful, then they are known as human-made resources. For example, buildings, vehicles, roads, etc.(iii) The people who serve us in various ways is known as human resource. They make the best use of nature. They change the natural resources into more useful form using their technical skills. For example, doctor, engineer, teacher, carpenter, etc.

Q.21. What do you understand by the term CITES? Explain briefly.Ans: (i) The term CITES stands for Convention on International Trade in Endangered Species of Wild Flora and Fauna.(ii) It is an agreement between governments. It aims to ensure that international trade in species of wild animals and plants does not threaten their survival.(iii) In total, 5,000 species of animals and 28,000 species of plants are protected. Bears, dolphins, cacti, corals, orchids, etc., are some of the examples of protected species.

Q.23. What did the Indian nationalists do against the arbitrary laws of the Britishers?Ans: (i) Indian nationalists began protesting and criticizing the arbitrary use of authority by the Britishers.(ii) They began fighting for greater equality and wanted to change the idea of law from a set of rules that they were forced to obey to such laws which included ideas of justice.(iii) By the end of the 19th century, Indian legal profession also began emerging and demanded respect in colonial courts.

Q.25. Why do you think there are so few cases of private water supply in the world?Ans: Private companies mainly operate to earn profits throughout the world. Water supply is among one of the public facility under Right to Water Act, according to UN. These private companies would provide water supplies but at a higher price, which people of all classes would not be able to afford.

Q.26. What can a historian derive from surveys?Ans: (i) Surveys in any field are very important and crucial in the sense that they help one to collect the right data, figures, information and reports regarding a subject.(ii) For a historian, surveys are equally important because a historian studies facts about history.(iii) For the historians, archeological surveys are important because they deal with the past.(iv) A historian can come across certain information like the ancient civilisations, the behaviours of human beings in the past, structure of the society, the culture and the traditions, habits and their livelihood.(v) These are important because the historians can assess actual information prevalent during the period and what transformation has been brought or will be taking place in future.

Q.27. Describe the events during the sepoy mutiny.Ans: (i) On 29 March 1857, a young soldier, Mangal Pandey, was hanged to death for attacking his officers in Barrackpore.(ii) Few days later, some sepoys of the regiment at Meerut refused to do the army drill using the new cartridges, which were suspected of being coated with the fat of cows and pigs.(iii) As a result, 85 sepoys were dismissed from service and sentenced to jail for years for disobeying their officers. This happened on 9th May 1857.(iv) On 10th May 1857, the other soldiers marched to the jail in Meerut and released the imprisoned sepoys.(v) British officers were killed, arms and ammunitions were seized and the buildings were set on fire.(vi) Triumphant soldiers gathered around the walls of the Red Fort where the Badshah lived, demanding to meet him. The soldiers themselves proclaimed Bahadur Shah Zafar as their leader, which he had to accept.

Q.28. Explain briefly the various factors responsible for soil formation.ORWhat are the main factors that influence the formation of the soil ?Ans: Various factors that are responsible for the formation of soil are as follows :(i) Parent rock: It determines the colour and texture of the soil. It also provides the base material for soil and determines the chemical and physical properties. It also determines the mineral content and permeability of the soil.(ii) Climate: It plays a role in disintegrating hard rock into soil particles with the help of weathering. The soil forming processes take place more rapidly during high temperature and heavy rainfall.(iii) Topography: Altitude and slope of a place determine the accumulation of soil.(iv) Time: It determines the thickness of the soil profile.(v) Organic material: Flora, fauna and micro-organisms help in decaying small rock particles into soil and affect the rate of humus formation.

Q.30. What are main features of secularism in India ?Ans: The main features of secularism in India are as follows:(i) Separation of minority rights.(ii) Promotion of minority rights.(iii) Inter-religious equality.(iv) State has no religion of its own.(v) Giving aid to religious educational institutions on the basis of equality.(vi) No patronage to any religion and no discrimination against any religion.(vii) Citizens are entitled to freely profess, practice and propagate the religion of their choice in which they have faith.

Q.31. What is a Fair Trial?Ans: (i) A fair trial is a trial which is held in an open court, in public view.(ii) Any relative can attend the court. The trial is held in the presence of the accused.(iii) The accused is defended by a lawyer. The advocate of the accused is given an opportunity to present witnesses in the accused defence.(iv) Although the police files the case, the judge should assume the accused to be innocent.(v) The judge should decide the matter only on the basis of evidence before the court.(vi) The judge should be impartial. It should be ensured that all the citizens irrespective of their class, caste, gender, religious and ideological background get a fair trial when being accused.

Q.32. On the given political map of India, mark the five important sessions of Indian National Congress along with the names of places and the month and year in which they were held. 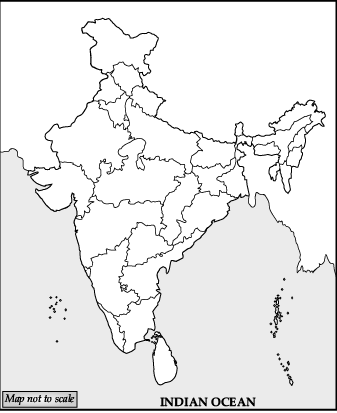 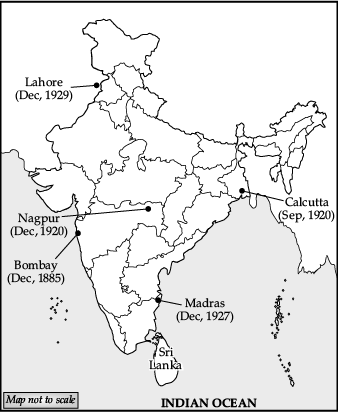