Q.1. Match the following items given in Column A with those in Column B. Choose the correctly matched pair from the options given below    (1 marks)

Q.2. When the Non-cooperation movement began the following year, the effort of the Congress was to integrate the Awadh Peasant Struggle into the wider struggle. The peasant movement, however, developed in forms that the Congress leadership was unhappy with. As the movement spread in 1921, the houses of talukdars and merchants were attacked, bazaars were looted, and grain hoards were taken over. Identify the name of the person who led the Awadh peasants during the Non-cooperation movement.    (1 marks)(i) Mahatma Gandhi(ii) Alluri Sitaram Raju(iii) Baba Ramchandra(iv) Abdul Ghaffar Khan(iii) Baba RamchandraAns: Baba RamchandraExplanation: Baba Ramchandra, a sanyasi who had earlier been to Fiji as an indentured labourer, helped Jawaharlal Nehru to set up Oudh (now Awadh) Kisan Sabha and led the movement during the Non-cooperation movement.Q.3. Study the picture and answer the question that follows:    (1 marks) 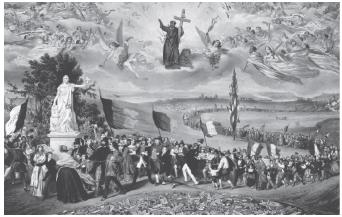 Explain Sorrieu’s Utopian vision behind the image of ‘The Dream of Worldwide Democratic and Social Republics’.Ans: In Sorrieu’s utopian vision, people of the world are grouped as distinct nations, identified through their flags and national costume in their journey to liberty and rebirth as nation states. Sorrieu’s time was characterised by the birth of nationalism as a very powerful driving force.Q.4. What do you know about the Act of Union, 1707?    (1 marks)Ans: The Act of Union (1707) was signed between England and Scotland as a result of which the ‘United Kingdom of Great Britain’ came into being. After the Act was signed, England could impose its influence on Scotland.Q.5. Read the source given below and fill in the blank that follows:    (1 marks)The government has launched a major road development project linking Delhi, Kolkata, Chennai Mumbai and Delhi with a six-lane super highway. The North-South Corridor linking Srinagar (Jammu & Kashmir) and Kanyakumari (Tamil Nadu), and East-West Corridor connecting Silchar (Assam) and Porbander (Gujarat) through a highway are part of this project.These projects are being implemented by ___________ Complete the sentence.Ans: National Highway Authority of India (NHAI)Q.6. Study the picture and answer the question that follows:    (1 marks) 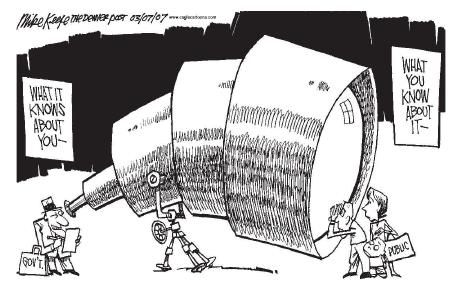 Q.29. Why did Mahatma Gandhi decide to join the Khilafat movement? Describe its association with the Non-cooperation movement and its importance.    (5 marks)Ans: Mahatma Gandhi wanted to make his ‘Satyagraha’ movement more inclusive. He realised that this could be possible only if Hindus and Muslims came together and joined it. He found the Khilafat issue strong enough to bring about this unity. The First World War had given a death blow to the Ottoman Empire of Turkey. The British had promised a generous treatment to the Khalifa, but they did not keep up the promise. The Khalifa was considered the spiritual head of the Muslims and a protector of their holy places. By 1920, the British had totally dismembered the Turkish Empire.To defend the Khalifa’s powers, a Khilafat committee was organised in Bombay under the Ali brothers, Mohammad Ali and Shaukat Ali, in March 1919. Gandhi was invited by the Ali brothers to join this committee. At the Calcutta session of the Congress in September 1920, Gandhi convinced other leaders to support the Khilafat movement and start the Non cooperation movement for Swaraj along with the Khilafat movement. Along with the Ali brothers, he toured India and gathered support for the movement. All Congress Committees adopted the Khilafat resolutions in 1921, and supported its four-point programme.The importance of the Khilafat movement is that it brought the Hindus and the Muslims under one cause. The Muslims also became a part of the national movement. This made it more inclusive.ORWhat do you mean by nation states? How did they emerge?Ans: Nation states were independent states formed with a democratic constitution, united citizens and emotions of brotherhood, belongingness and patriotism.The basis of nation states was on parliamentary principles - a constitution, freedom of the press and freedom of association. Nation states were born in place of multinational dynastic empires of Europe. Citizens and rulers of Nation states developed a sense of common identity, shared history and descent. This shared identity was forged through struggles, actions of leaders and common people.Nation states emerged as a consequence of nationalism which brought sweeping changes in the political and mental world of Europe.Q.30. Read the extract and answer the questions that follow:    (5 marks)You have studied the physical diversities and plurality of cultures in India. These are also reflected in agricultural practices and cropping patterns in the country. Various types of food and fibre crops, vegetables and fruits, spices and condiments, etc. constitute some of the important crops grown in the country. India has three cropping seasons — rabi, kharif and zaid.30.1 What are zaid Crops?Ans: Zaid crops are grown in the short season during summer months. Some examples are watermelon, muskmelon, cucumber, vegetable and fodder crops.30.2 Distinguish between kharif and rabi crops with examples.Ans:

Q.31. Why does the textile industry occupy a unique position in the Indian economy?    (5 marks)Ans: The textile industry occupies a unique position in the Indian economy because:(1) The textile industry contributes significantly to industrial production, i.e. about 14%. Wide market and availability of transport, banking and electricity facilities in almost all parts of the country has led to the spread of textile mills in different areas of the country.(2) It is the only industry in India which is self - reliant and complete in the value chain, i.e. from raw material to the highest value added products.(3) The textile industry is a labour intensive industry, so a large number of people are employed at different stages of its working such as ginning, spinning, weaving, dyeing, designing, printing, tailoring and sewing.(4) The textile industry not only employs a lot of people, it also provides a huge amount of foreign exchange earnings to the country.Thus the position of the textile industry in India is very significant and unique.ORAnalyse the role of manufacturing industries in the economic development of a country.Ans: The role of manufacturing industries in the development of country:(1) Manufacturing industries help in modernising agriculture, which forms the backbone of the Indian economy.(2) Manufacturing industries also reduce the heavy dependence of people on agricultural income by providing them jobs in secondary and tertiary sectors.(3) Industrial development reduces unemployment and poverty.(4) It also brings down regional and economical  disparities in the country.(5) Export of manufactured goods expands trade and commerce and brings home foreign exchange.(6) The prosperity of a country depends on trans-forming raw materials into finished goods of higher values and diversifying its industries.(7) The industrial sector contributes 27% of GDP and manufacturing contributes about 17% of GDP.Q.32. What is federalism? Underline how federalism is practised in India.    (5 marks)Federalism is a system of government in which power is divided between a central authority and various constituent units of a country. Federalism is practised in India in the following ways:(1) Division of powers: Three-fold distribution of legislative powers between central and state governments in the form of Union List, State List and Concurrent List where authority of making laws over mentioned subjects has been divided between the two is a way in which co-operative federalism works in our country.(2) Language policy: Constitution does not declare any one language as the national language. Besides Hindi, 21 other languages are declared or recognised as Scheduled languages of the country. Thus, interests of both Hindi-speaking and non-Hindi- speaking regions are preserved.(3) Power sharing is basic to the structure of the constitution: The sharing and distribution of powers between the union government and the state governments is basic to the structure of constitution. It is not easy to make changes to this power sharing arrangement. Any change to it requires 2/3rd majority of both the houses of parliament and ratification of at least half of the total states.Q.33. State the various functions of political parties in India.    (5 marks)Ans: A political party which mainly has three components:(i) namely the leaders(ii) the active members and(iii) the followers has multiple functions to follow in a democracy like India.Since we’re a multi-party system, there exist various national and state parties who contest elections in every 5 years.(1) Parties contest elections, form & run the government: One of their main function is to contest elections in order to win over the people, gain authority and run a responsible, legitimate and popular government that takes care of the interests of all communities, classes and genders before taking any actions or big decision in any field. Top party leaders choose representatives who contest elections win the majority of seats and form and run the government.(2) Parties put forward policies and programmes: Political parties put forward various policies and programmes for the voters/people to choose from. People have a large number of different opinions and views on what policies are suitable for the society. Parties group together similar opinions to get a direction in which policies can be formed by the government.(3) Parties make laws: Parties play a decisive role in making laws for a country.(4) Parties shape public opinion: They raise and highlight issues. Parties have lakhs of members and activists spread all over the country. Thus they help increase political participation of the people in a country’s politics.(5) Parties provide people access: Access to government machinery and welfare schemes implemented by governments. They find it easier to convey their requirements to a local leader than a government officer. That is why people feel close to parties even when they don’t trust them fully.(6) Parties play the role of the opposition: Those parties that lose the elections play the role of the opposition to the party in power by voicing different views and criticizing the government for its wrong policies. These parties also extend their active support to the government during the national emergency in the country.

Q.34. Differentiate between the primary sector and the secondary sector by stating four points of distinction.    (5 marks)

Q.35. (a) Two places A and B have been marked on the given political outline map of India. Identify them with the help of the following information and write their correct names on the lines marked near them.    (2 marks)

(A) The place where the peasant struggle against the Indigo plantation system was led by Mahatma Gandhi.

(B) The place where a session of the Indian National congress was held in September 1920.

(b) On the same outline map of India, locate and label any four of the following with suitable symbols:    (4 marks) 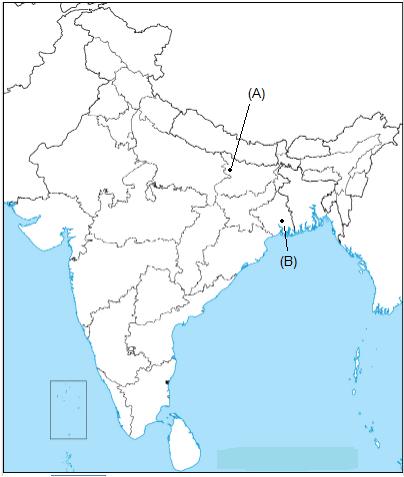 Ans: (a) (A) Champaaran(B) Calcutta(b) Located and labelled on the map. 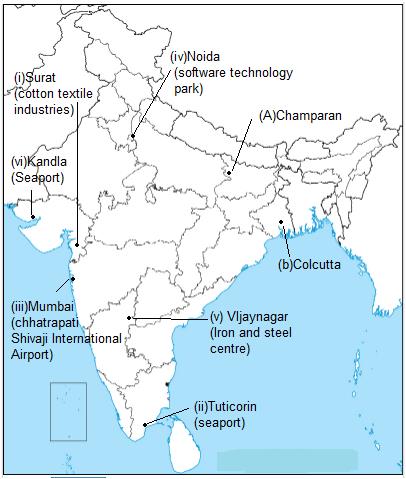