Q.5. The unit of relative density is:(a) kg m-3(b) g cm-3(c) g litre-1(d) it does not have a unitOrTwo balls, one of iron and other of aluminium experience same upthrust when dipped in water,(a) both have equal volume(b) both have equal weight in air(c) both have equal density(d) nothing definite can be saidAns: (d) Or (a)Q.6. Rusting of an article made up of iron is called(a) corrosion and it is a physical as well as chemical change(b) dissolution and it is a physical change(c) corrosion and it is a chemical change(d) dissolution and it is a chemical changeAns: (c) corrosion and it is a chemical changeExplanation: Rusting of an article is a corrosion and it is a chemical change, In the presence of water or air moisture, the redox reaction of iron and oxygen occurs which forms iron oxide, usually red oxide called as rust.Q.7. Which of the following ions have a valency of + 3 or - 3 ?(a) Phosphate(b) Sulphate(c) Barium(d) AluminiumAns: (а) and (d)Q.8. Which of the following is a recently originated problem of environment ?(a) Ozone layer depletion(b) Greenhouse effect(c) Global warming(d) All of theseOrMarked temperature changes in aquatic environment can affect:(a) Breeding of animals(b) More growth of aquatic plants(c) Process of digestion in animals(d) Availability of nutrientsAns: (d) Or (a)Q.9. Who introduced the system of scientific nomenclature of organism?(a) Robert Whittaker(b) Carl Linnaeus(c) Robert Hooke(d) Ernst HaeckelORElephantiasis is caused by(a) Wuchereria(b) Pinworm(c) Planarians(d) Liver flukesAns: (b) Carl LinnaeusExplanation: Carl Linnaeus formulated the method of naming organisms called the binomial system of nomenclature. In this system/ each type of organism has two Latin names i.ev one for its genus anc the other for its species.OR(a) WuchereriaExplanation: Elephantiasis is caused by nematode parasites Wuchereria bancrofti. It is a condition (alsc called filariasis) in which a limb or other part of the body becomes enlarged due to blockage of tlu lymphatic vessels.Q.10. If there were no atmosphere around earth, the temperature of the earth will(а) increase.(b) go on decreasing.(c) increase during the day and decrease during the night. id) be unaffected.Ans: (c) In the absence of atmosphere around the earth, the temperature of the earth will increase during the day and decrease during night.Q.11. The molecular formula faluminium sulphate is:(a) Al2(SO4)3(b) AlSO4(c) Al3(SO4)2(d) Al2(SO4)4Ans: (a)Q.12. What is the duration of Kharif season ?Ans: From the month of June to October.Q.13. Kinetic energy is proportional to the mass and velocity of the moving object.Ans: False - Kinetic energy is proportional to (i) mass (m)1 and (ii) square of the velocity (v2) of the object.Q.14. Assertion: The value of acceleration due to gravity (g) is independent of the mass of the body.Reason: The value of acceleration due to gravity g =

Q.15. (a) Given below are SI units of some physical quantities:kg m s-1, m s-1 kg m s-2, m s-2Which one of the above can be used for measuring momentum of an object ?Write the physical quantity that needs to be varied if the momentum of a body of given mass has to be changed.(b) A constant force acts on an object of mass 2 kg for 10 s and increases its velocity from 5 m s-1 to 10 m s-1. Find the magnitude of applied force. If this force was applied for a duration of 15 s, what would be the velocity of the object ?Ans: (a) The unit kg m s-1 measures momentum of an object. To change the momentum of a body of given mass we must change its velocity because momentum is given by the product of mass and velocity.(b) Here mass m = 2 kg, initial velocity u = 5 m s-1 and final velocity v = 10 m s-1 after a time t = 10 s∴ Acceleration a =

∴ Force F = ma = 2 x 0.5 = 1 NFurther velocity v' after a time t' - 15 s will be:v' - u + at' = 5 + 0.5 x 15 = 12.5 m s-1Q.16. (a) What is the effect of temperature on the solubility of a solid in liquid?(b) Why is it possible to distinguish the particles of solution from those of solvent in a suspension ?OrWhen a bar magnet is brought closer to the mixture of iron filings and sulphur powder. Iron particles stick to the magnet, while incase of iron sulphide, no change will be observed. When a mixture of iron and sulphur is added to carbon disulphide, sulphur dissolves while incase of iron sulphide, no change is observed.Ans: (a) If temperature increases, solubility increases and if temperature decreases, solubility decreases.(b) Because particle size is bigger in suspensions.OrProperties of a compound are different from its constituents, while a mixture shows the properties of its constituent elements. Justify this statement taking the example of iron and sulphur.Q.17. (a) State any one difference between pure and impure substances.(b) What will you observe when:(i) Carbon disulphide is added to the compound iron sulphide ?(ii) Dil. hydrochloric acid is added to a mixture of iron filings and sulphur powder.ORDraw a flowchart showing the separation of components of air. Also, name this process.Ans: (a) Pure substances contain only one kind of particles or two or more particles in a fixed ratio while impure substances contain more than one kind of particles.(b) (i) No reaction,(ii) Evolution of gasORAir is a homogeneous mixture and can be separated into its components by the process of fractional distillation. The flow diagram shows the steps of the process :

Q.18. List two differences between a pure substance and a mixture. Give one example of each.OrGive the classification of elements with examples.Ans: A pure substance consists of one type of particles while a mixture consists of different types of particles. A pure substance cannot be separated into other kinds of matter while a mixture can be separated into different kinds of matter. Sodium chloride and water are separately pure substances but sodium chloride solution is a mixture.ORElements are classified into metals, non-metals and metalloids.Examples: Metals: Sodium, potassium, calcium, copper, iron, zinc.Non-metals: Hydrogen, carbon, oxygen, sulphur, chlorine.Metalloids: Boron, silicon, arsenic.Q.19 (a) Draw and identify different elements of phloem.(b) Name the muscular tissues which is present in the iris of the eye. What is the shape of these cells ?Ans: 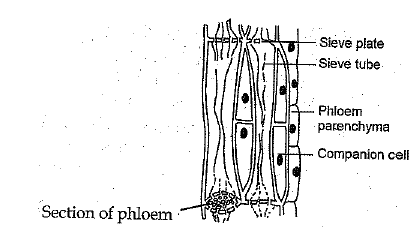 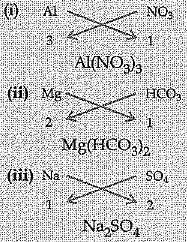 Thus, the number of moles in the two cases are not equal.

Q.22. Explain the following:
(i) Why it is difficult to walk on marshy land?
(ii) Why does an air filled balloon rise up slightly when punctured from below?
(iii) Why does a swimmer push water backward with his hands in order to swim in forward direction ?
Ans: (i) It is difficult to walk on marshy land because when we push the ground with our feet, the ground yields and gives no reaction.
(ii) As the air comes out of the punctured balloon it applies an upward reaction on the balloon. Thereby making it rise up slowly.
(iii) According to Newton's third law of motion, when the swimmer pushes the water backwards the water applies a forward reaction on him. This makes the swimmer move forward.

Q.24. What factors may be responsible for losses of grains during storage ?
Ans: Food grains produced in our country are lost every year due to improper methods of storage and inadequate storage.
The various factors responsible for such loss during storage are:
(i) Biotic factors: They include insects, rodents, bacteria, fungi, mites, worms and birds.
(ii) Abiotic factors: They include inappropriate moisture, hum idity in air and temperature in the place of storage.
These factors cause poor quality, loss in weight, discolouration of produce, poor germinability and poor marketability of grains.

Q.25. The velocity-time graph of an object is as shown below: 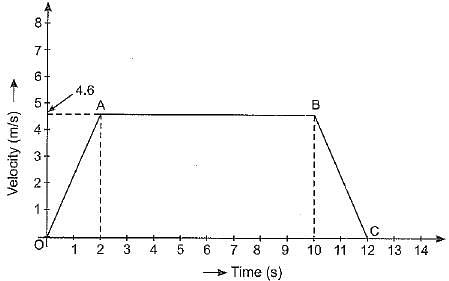 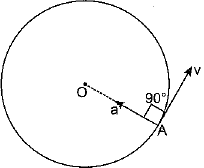 Q.27. 'Over crowded and poorly ventilated housing is a major factor in the spread of airborne diseases'. Explain the statement and support your answer with diagram also'.
Ans: (i) When we are closer to infected person, air transmitted diseases are easily transferred,
(ii) In closed areas, the droplet nuclei recirculate arid pose a risk to everybody. 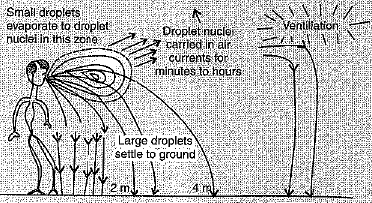 Q.28. Draw a plant cell and label the parts which
(а) determines the function and development of the cell.
(b) packages materials coming from the endoplasmic reticulum.
(c) provides resistance to microbes to withstand hypotonic external media without bursting.
(d) is site for many biochemical reactions necessary to sustain life.
(e) is a fluid contained inside the nucleus.
Or
The immune system of Hari is damaged by the attack of pathogen on his body.
(i) Name the disease he is suffering from.
(ii) Name the pathogen that has attacked his body.
(iii) Mention any three modes of transmission of this disease.
Ans:

OR
(i) Hari is suffering from AIDS - Acquired Immuno Deficiency Syndrome.
(ii) The pathogen that has caused AIDS is HIV — Human Immuno Deficiency Virus.
(iii) This virus is transmitted through following ways :
(a) Sexual contact with an infected person carrying AIDS virus.
(b) Transfusion of blood infected with HIV.
(c) Use of unsterilised needles, blades or razors.
(d) Transplacental transmission i.e., AIDS infected mother to the foetus developing in her womb.

Q.29. (a) A cube of side 5 cm is immersed in water and then in saturated salt solution. In which case will it experience a greater buoyant force? If each side of the cube is reduced to 4 cm and then immersed in water, what will be the effect on the buoyant force experienced by the cube as compared to the first case for water? Give reason for each case.
(b) A ball weighing 4 kg of density 4000 kg m-3 is completely immersed in water of density if f kg m-3.
Find the force of buoyancy on it.
(Given g = 10 m s-2)
Ans: (a) Buoyant force = Vρg. Since density (ρ) of saturated salt solution is more than that of water, so the cube will experience greater buoyant force in saturated salt solution when size of cube is reduced, its volume (V) also reduces. Hence, it will experience less buoyant force than in first case.
(b) Buoyant Force = Vρg = volume of water displaced x density of water x g= mass of ball/density of ball x density of water x g = 4/4000 x 103 x 10 = 10 N

Q.30. Do all cells of our body look alike in terms of shape, size and structure ? What similarities do they have ? Illustrate by drawing diagrams of various cells present in human body.
OR
(a) What is the name given to the thread shaped structures in the nucleus ? Why is it important?
(b) Draw a diagram of the nudeus to show, the given parts
(i) nucleolus,
(ii) nuclear pore,
(iii) nuclear envelope.
Ans: No, not all cells in our body look alike in terms of shape, size and structure. The shape, size and structure of cell are determined by the function which it performs.
The eggs of many animals are spherical in shape, some are oval in shape, smooth muscle fibres are s- spindle shaped, nerve cells are elongated and RBCs arc discoidal in shape. The size and number of cells also vary from organism to organism.
Similarities : All cells have the same organelles. 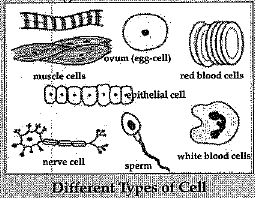 OR
(a) The thread shaped structures in the nucleus are known as chromosomes. These are important because they contain information for inheritance of features from parents to the next generation.
(b)