The document Notes | EduRev is a part of the Class 9 Course Sample Papers For Class 9.
All you need of Class 9 at this link: Class 9

Q.9. If areas of three adjacent faces of a cuboid be x, y and z respectively then its volume is
(a)

The nth term ln from end is given by ln =

The fourth term ln from end is given by l4 Question numbers 21 to 26 carry 2 marks each.
Q.21. Sudhir and Ashok participated in a long jump competition along a straight line marked as a number line. Both start the jumps one by one but in Opposite directions. From ‘O’ Ashok jumps one unit towards the positive side while Sudhir jumps double in units as Ashok jumps, along negative side. After jumping 4 jumps each, at which point Ashok and Sudhir reached. What is the distance between their final positions? Ashok argues that he is the winner since Sudhir is at negative side. Who do you think is winner and why? (i) Find ∠BAC.
(ii) Find ∠BOC.
Ans: (i) Here, A, B and C represented three STD booths.
As, A, B, C are equidistant from each other
AB = BC =CA
Then, ΔABC is an equilateral triangle.
Hence, ∠BAC = ∠ABC =∠BCA = 60°
(ii) We know that the angle substended by an arc at the centre of the circle is twice the angle subtended by it at any point on the remaining part of the circle.

If equals are subtracted from equals, the remainders are also equal
We have PQ - QX = QR - QY
PX = RY

Question 27 to 34 carry 3 marks each.
Q.27. Planting more and more trees is helpful in reducing pollution and make the environment clean and green for our coming generations. Keeping in mind above, on environment day, class-9 students got five plants of mango, silver oak, orange, banyan and amla from soil department. Students planted the plants and noted their locations as (x, y). ...(1)
We know that if two complex numbers are equal, then their conjugates are also equal. Taking conjugate of both sides, we get

Since xy < 0, therefore x and v are of opposite sign.

Q.29. A survey of 200 people was conducted about their preference for visiting various pavilions.

Find the probability that selected person visited
(i) both Good living and Delhi pavilion.
(ii) only Defence pavilion.
(iii) both Toy and Defence pavilion.
Or
Probability of getting a blue ball is 2/3 from a bag containing 6 blue and 3 red balls. 12 red balls are added in the bag, then find the probability of getting.
(i) a blue ball.
(ii) a red ball.
Ans: Total number of people = 200
(i) P(Good living and Delhi pavilion) Q.31. In the given figure, a point 0 is taken inside an equilateral quadrilateral PQRS, such that OP = OR. Show that Q, O and S tie on the same straight line.

Hence, PR is the perpendicular bisector of diagonal QS.

Q.33. If a and b are rational numbers and

then find the values of a and b.
Ans:

On comparing both sides, we get

Find the probability that a person selected at random has :
(i) weight less than 65 kg
(ii) weight between 61 and 64 kg
(iii) weight equal to or more than 64 kg
Ans: On comparing the powers from both sides, we get 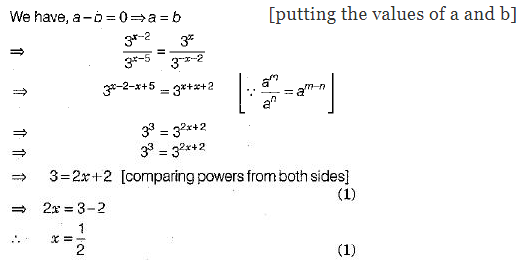 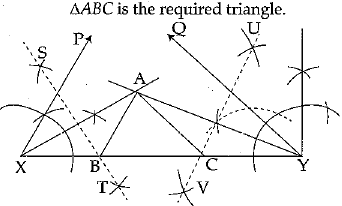 Q.39. A bus stop is barricaded from the remaining part of the road, by using 50 hollow cones made of recycled cardboard. Each cone has a base diameter of 40 cm and height 1 m. If the outer side of each of the cones is to be painted and the cost of painting is Rs.12 per m2, what will be the cost of painting all these cones?