The document Sample Question Paper - 2 Notes | EduRev is a part of the Class 9 Course Sample Papers For Class 9.
All you need of Class 9 at this link: Class 9 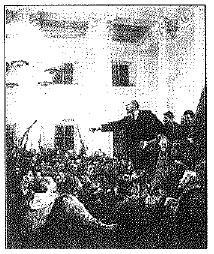 Who is the person speaking to the crowd? (a) VI Lenin (b) Adolf Hitler (c) Joseph Stalin (d) RobespierreAns. (a) VI LeninQ.3. What is the meaning of bugyal ? (a) A hut in the mountains (b) A hut in the plains (c) A vast meadow in the high mountains (d) None of the above Ans. (c) A vast meadow in the high mountains.Q.4. Why the Godavari river is known as 'Dakshin Ganga'?Ans. The Godavari river is known as ‘Dakshin Ganga’ because of its length and large area covered by it.Q.5. Name the religion which was followed by most of the people of Russia.OrWhat was the new name given to St. Petersburg ?Ans. Russian Orthodox Christianity was the religion which is followed by most of the people in Russia.Q.6. _____ of Java were a community of skilled forest cutters and shifting cultivation.Ans. KalangsQ.7. What is the age group of population which is regarded as the work force?OrWho said that food security means the access to food through entitlements?Ans. In India, the workforce population includes people from the age of 15 to 53 years.Cr Amartya Sen is the speaker here.Q.8. If you are visiting the mangrove forests of the Ganga delta, which among the fourteen bio-reserves are you in?Ans. I am in the Sunderbans bio-reserve, which is a mangrove forest that lies in the Gang a-Brahmaputra delta.Q.9. __________ water fall is made by river Kaveri.Ans. SivasamudramQ.10. The famous book, 'Two Treatises of Government' is written by...........OrThe two Indians who responded to the ideas coming from revolutionary France are......... and ............Ans. John LockeOrTipu Sultan, Raja Rammohan RoyQ.11. Which of the following countries is ruled by a hereditary ruler?(a) Afghanistan(b) Iran(c) Bangladesh(d) Saudi ArabiaAns. (d) Saudi ArabiaQ.12. Luni is the small river in the Indian desert.Ans. False.Q.13. Bhabar is(a) vast meadows in the low mountains.(b) vast meadows in the high mountains.(c) a dry forested area below the foothills of Garhwal and Kumaun.(d) None of the aboveAns. (c) A dry forested area below the foothills of Garhwal and KumaunQ.14. General Pervez Musharraf overthrew a democratically elected government and declared him self the ......... of the country.OrThe name of the Chinese Parliament is .............Ans. Chief ExecutiveOrNational People’s CongressQ.15. The quality of the population does not depend on literacy rate and health. Ans. False.Q.16. The colonial government started commercial forestry in India in the...........OrIn ......... the Mataram Kingdom of Java Split.Ans. Early 19th centuryOr1775.Q.17. Find the incorrect option: (1) Unfair electoral practices are as follows: (a) The supporters of a candidate distribute blankets in slums in return for a promise for vote. (b) Supporters of a candidate take voters to a temple and make them take an oath that they will vote for him. (c) A minister flags off a hew train in his constituency a week before polling day. (d) A candidate promises that he will get a new tram tor his constituency it he is elected.Ans. (d) A candidate promises that he will get a new train for his constituency if he is elected.Q.18. Name the southern neighbours of India across the sea.Ans. Sri Lanka and Maldives.Q.19. In the question given below, there are two statement marked as Assertion (A) and Reason (R). Read the statement and choose the correct option.Assertion (A) The seasonal hunger affects the landless agricultural labourers most.Reason (R) The seasonal hunger is the consequence of seasonal nature of food production and harvesting.Options (a) Both A and R are true and R is the correct explanation of A. (b) Both A and R are true and R is not the correct explanation of A. (c) A is true but R is false. (d) A is false but R is true.Ans. (a) Both A and R are true and R is the correct explanation of AQ.20. In a democratic country, two categories make up the Executive. One that is elected by the people for a specific period, is called the Political Executive. Political leaders who take the big decisions fall in this category. In the second category, people are appointed on a long-term basis. This is called the Permanent Executive or Civil Services. They remain in office even when the ruling party changes. These officers work under the Political Executive and assist them in carrying out the day-to-day administration.Analyse the information given above and consider one of the following as the correct option:(a) The members of the Executive(b) Political and Permanent Executive(c) Long term and short term Executive(d) Power of Civil ServicesAns. (b) Political and Perrranent Executive

Q.35. (a) Two items (i) and (ii) are shown in the given outline map of France. Identify these items with the help of following information and write their correct names on the lines marked on the map.(i) The present capital of France(ii) The port of France enriched due to slave trade 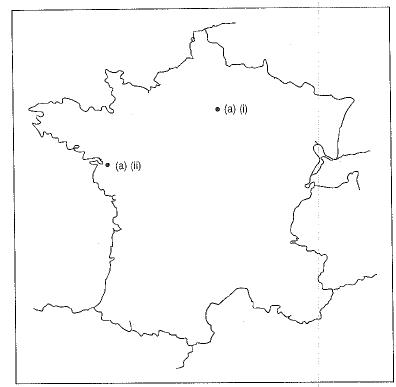 Ans. The answer map is given below : 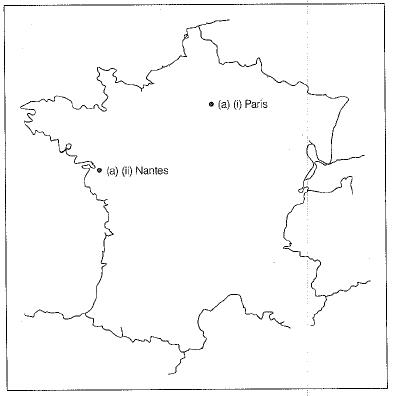