The document Sample Question Paper - 4 Notes | EduRev is a part of the Class 10 Course English Class 10.
All you need of Class 10 at this link: Class 10

SECTION B — WRITING AND GRAMMAR

Q.7. The following paragraph has not been edited. There is one error in each line. Identify the error and write it along with corrections as shown below. Underline the correct word supplied by you. 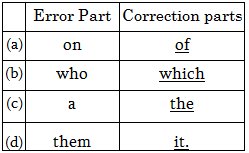