Q.2. How would you confirm that a colourless liquid given to you is pure water ?Ans. By evaporating the colourless liquid on a low flame. If there is no residue left, then the colourless liquid is pure water.Q.3. Which one of the following is not important for individual health?(a) Living in clean space.(b) Good economic condition.(c) Social equality and harmony.(d) Living in a large and well furnished house.ORWe should not allow mosquitoes to breed in our surroundings because they(a) multiply very fast and cause pollution.(b) are vectors for many diseases.(c) bite and cause skin diseases.(d) are not important insects.Ans. (d) Living in a large and well furnished house.Explanation: The conditions essential for good health are clean surrounding, availability of clean drinking water, availability of clean adequate, nutritious food and social equality and harmony.OR(b) Are vectors for many diseases.Explanation: Many animals which live with us carry disease. These animals transfers infectious agents from sick person to another potential host (healthy person) and act as vectors. Mosquitoes are known to act as vector for many diseases. For example, Mosquito Anopheles, Culex and Aedes causes malaria, filariasis and dengue respectively.Q.4. The SI unit of frequency is (a) second (s) (b) hertz (Hz) (c) decibel (dB) (d) watt/(metre)2 (W m-2)Ans. (b) SI unit of frequency is 1 hertz (1 Hz), where 1 Hz = 1 cycle per second.Q.5. If the displacement of an object is proportional to square of time; then the object moves with : (a) uniform velocity (b) uniform acceleration (c) increasing acceleration (d) decreasing acceleration Or The speed-time graph of a body is a straight line parallel to time axis. The body has:
(a) uniform acceleration (b) uniform speed(c) variable speed (d) variable acceleration Ans. (b) Or (b)Q.6. Find out the wrong statement from the following:(a) White revolution is meant for increase in milk production.(b) Blue revolution is meant for increase in fish production.(c) Increasing food production without compromising with environmental quality is called as sustainable agriculture(d) None of the aboveAns. (d)Explanation: All the statements are correct. White revolution is meant for increase in milk production, blue revolution is meant for increase in fish production and green revolution is for high production of food grains. Sustainable agriculture is the increasing food production without compromising with environmental quality.Q.7. The number of atoms of hydrogen present in 17 g NH3 is (a) 6.022 x 1023 (b) 6.022 x 1022 (c) 1.8066 x 1024(d) 6.022 x 1024 Ans. (c)Q.8. Poultry fowl are susceptible to the following pathogens : (a) Viruses (b) Bacteria (c) Fungi (d) All of the above Or When we breathe in air, nitrogen also goes inside along with oxygen. What is the fate of this nitrogen? (a) It moves along with oxygen into the cells (b) It comes out with the CO2 during exhalation (c) It is absorbed only by the nasal cells (d) Nitrogen concentration is already more in the cells so it is not at all absorbed Ans. (d) or (b)Q.9. Which of the following would weigh the highest?(a) 0.2 mole of sucrose (C12H22O11)(b) 2 moles of CO2 (c) 2 moles of CaCO3 (d) 10 moles of H2OAns. (c) 2 moles of CaCO3 Explanation: 2 moles of CaCO3 would weigh the highest. It is because,
(a) Mass of 1 mole of sucrose (C12H22O6) = (12 x 12) + (1 x 22) + (16 X 11)= 342 g
Mass of 0.2 mole of sucrose = 342 x 0.2 = 68.4 g
(b) Mass of 1 mole of CO2 = 12 + (16 x 2) = 44 g
Therefore, mass of 2 moles of CO2 = 44 x 2 = 88 g
(c) Mass of 1 mole of CaCO3 = 40 + 12 + (16 x 3) = 100g
Mass of 2 moles of CaC03 = 100 x 2 = 200 g
(d) Mass of 1 mole of H2O = 2 + 16 = 18 g
Mass of 10 moles of H2O = 18 X 10 = 180 g
Therefore, mass of 2 moles of CaCO3 is the highest, i.e., 200 g.

Q.12. How can we separate a mixture of two immiscible liquids
Ans. By using a separating funnel.

Q.14. Assertion : A sound created in a big hall will persist by repeated reflection from the walls until it is reduced to a value where it is no longer audible.
Reason : Sound undergoes reflection.
(i) A
(ii) B
(iii) C
(iv) D
Ans. (i) 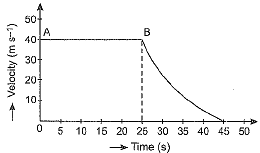 Speed-time graphs for motorcycles A and B have been plotted in figure.
Distance covered by motorcycle A 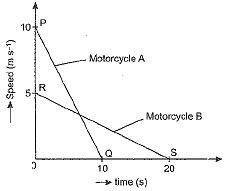 and distance covered by motorcycle B
sB = area ORS

Thus, both motorcycles travelled equal distance before coming to a stop.

Q.16. In a reaction, 5.3 g of sodium carbonate reacted with 6 g of ethunuic acid. The products were 2.2 g of carbon dioxide, 0.9 g water and 8.2 g of sodium ethanoate. Show that these observations are in agreement with the law of conservation of mass, sodium carbonate + ethanoic acid → sodium ethanoate + carbon dioxide + water.
Or
Cinnabar (HgS) is a prominent ore of mercury. How many grams of mercury is present in 225 g of pure HgS ? Molar mass of Hg and S are 200.6 g mol-1 and 32 g mol-1 respectively.
Ans. (a) Mass of reactants before experiment
= Mass of sodium carbonate + Mass of ethanoic acid
= 5.3 g + 6 g = 11.3 g
Mass of products after experiment
= Mass of sodium ethanoate + Mass of carbon dioxide + Mass of water
= 8.2 g + 2.2 g + 0.9 g = 11.3 g
The mass of reactants is equal to the mass of products, therefore, it proves law of conservation of mass.
Or

Q.17. What type of motion is represented by each of the following graphs ?

Q.18. State two factors that determine the rate of diffusion of a liquid into another liquid.
Or
A substance A has high compressibility and can be easily liquefied. It can take the shape of any container. Predict the nature of the substance. Enlist four properties of this state of matter.
Ans. The two factors are :
Miscibility : Greater the miscibility of one liquid into the other, greater will be rate of diffusion.
Temperature : With increase in temperature, the kinetic energy of particles increases, hence the rate of diffusion increases.
Or
The substance A is a gas because gases have large empty spaces between the particles. It has high compressibility and can be easily liquefied.
Properties of gases :
(i) Gases have no fixed shape and volume.
(ii) Gases can be compressed on applying pressure to give liquids.
(iii) Particles of a gas are moving in all possible directions with all possible speeds.
(iv) Gases show the property of diffusion.

Q.19. In brief state what happens when :
(a) dry apricots are left for sometime in pure water and later transferred to sugar solution?
(b) a red blood cell is kept in concentrated saline solution ?
(c) the plasma membrane of a cell breaks dowm ?
(d) rheo leaves are boiled in water first and then a drop of sugar syrup is put on it ?
(e) golgi apparatus is removed from the cell ?
Ans. (a) First it swells due to endosmosis and then exosmosis occurs and it shrinks.
(b) It will lose water and shrink.
(c) The cell will die.
(d) The cell gets killed on boiling, so no plasmolysis.
(e) All sorts of vesicle formation stops.

Q.22. (a) State the universal law of gravitation.
(b) Write the formula to find the magnitude of the gravitational force between the earth and an object on the surface of the earth.
Ans. (a) Every particle in this universe attracts every other particle with a force which is directly proportional to the product of their and inversely proportional to the square of the distance between their centres.
(b) The formula is F

Q.23. Ozone is poisonous and is found in upper atmosphere of earth yet the world is worried about its depletion. Explain why? Write any two methods to control ozone layer depletion.
Ans. Ozone forms a protective layer and prevents harmful rays from entering the earth's surfaces and thereby harming life.
UV rays may cause skin cancer.
Methods to control ozone layer depletion are:
(i) Do not use CFC's.
(ii) Reduce the release of nitrogen oxides and sulphur oxides in nature.

Q.24. The given figure shows two crop fields (Plots A and B) which have been treated by manures and chemical fertilisers. Keeping other environmental factors same, observe the graph and answer the following questions : 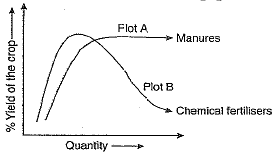 (a) Why does plot B show sudden increase and then gradual decrease in the field ?
(b) Why is the height peak in A graph slightly delayed ?
(c) What is the reason for the different patterns of the two graphs ?
Or
(а) What are pesticides ? Give examples.
(b) Why one should avoid use of chemical pesticides ?
Ans. (a) Plot B shows sudden increase and then gradual decrease as use of chemical fertilisers provide essential minerals immediately, resulting in good growth but in the long run, destroys soil fertility as organic matter in soil is not replenished and hence decreased yield.
(b) Delayed peak in Plot A as the organic manure releases minerals slowly.
(c) Organic manure improves soil fertility, soil composition, increasing its water holding capacity and hence continues to give good yield whereas chemical fertilisers do not help in improving soil quality and hence the nutrients got washed away with irrigation, resulting in decrease in yield after a peak.
Or
(a) The chemicals which are used to kill insect pests, fungi, weeds and rodents are called pesticides. Example : DDT, Malathion and BHC.
(b) Use of chemical pesticides should be avoided because they cause environmental pollution as these chemicals are non-biodegradable.

(a) The object A has greater inertia because its mass is more.

Thus, object B has greater momentum.
(c) If equal negative acceleration - a is applied on both then object A will stop first because its initial velocity is less. As v - 0, hence we have 0 = u - at or t =u/a.
(d) As distance travelled in time t is given by s = ut + 1/2 at2. Since acceleration ‘a' is negative, the relation becomes s= ut - 1/2at2. Of course uB > uA but depending upon the value of 'a', sA may be less than or greater than sB.
(e) The force imparted on collision with a ball is equal to rate of change of momentum of the given object. As a result, object B will impart a greater force.

(b) (i) Sublimation.
(ii) The amount of heat required to convert 1 kg of solid into liquid at one atmosphere pressure at its melting point is known as its latent heat of fusion.

Q.28. Enlist one important function of each of the following :
(i) Plastids
(ii) Mitochondria
(iii) Cell wall
(iv) Plasma membrane
(v) RER.
Ans. One function of each :
(i) Plastids : They are specialised to synthesise and store organic substances.
(ii) Mitochondria : It is known as powerhouse of the cell. Cellular respiration takes place in this organelle resulting in release of energy.
(iii) Cell wall : It provides rigidity, permeability and protection to the plant cell.
(iv) Plasma membrane : It regulates entry and exit of molecules from within the cell to exterior and vice-versa.
(v) RER : It is the site of protein synthesis.