The document Sample Question Paper - 8 Class 10 Notes | EduRev is a part of the Class 10 Course Science Class 10.
All you need of Class 10 at this link: Class 10

Q 1. Name the method by which Hydra reproduces. Is this method sexual or asexual ? ORName the respiratory pigment in human beings. Where is this pigment found ?    (1 Mark)Ans:Hydra normally reproduces by budding.It is an asexual reproduction.orThe respiratory pigment in human being is haemoglobin. Haemoglobin is present in RBC's of blood in humAns:

Q 2. What change will you observe if you test soap with litmus paper (red and blue) ?    (1 Mark)Ans: Soaps are alkaline, so it will turn red litmus blue and, no effect on blue litmus paper.

For Q.Nos. 4(i)-4(iv) are based on the table given below. Study these table related to answer the questions that follow :Q 4. A few biodegradable and non-biodegrable substances are given below

(ii) The substances which can be broken down to simpler forms are known as biodegradable wastes.
(iii) (c) When a substance cannot be broken down by microbial action to simpler forms, it is classified as non-biodegradable. They persist in nature for very long time and pollutes it.
(iv) (d) Biodegradable wastes pollute the environment only their amount is large which cannot be degraded into harmless forms in nature at the right time.

Q 5. Common salt besides being used in kitchen can also be used as the raw material for making:    (1 Mark)(i) washing soda (ii) bleaching powder (iii) baking soda (iv) slaked lime (a) (i) and (ii) (b) (i), (ii) and (iv) (c) (i) and (iii) (d) (i), (iii) and (iv)OR
While studying the saponification reaction, what do you observe when you mix an equal amount of colourless vegetable oil and 20% aqueous solution of NaOH in a beaker? (a) The colour of the mixture has become dark brown. (b) A brisk effervescence is taking place in the beaker.(c) The outer surface of the beaker has become hot.(d) The outer surface of the beaker has become cold.Ans: c
Explanation: The common salt obtained is an important raw material for various materials of daily use, such as sodium hydroxide, baking soda, washing soda and many more.
OR
Correct Option (c)Explanation: The beaker becomes hot because it is an exothermic reaction.

Q 6. Electrical resistivity of a given metallic wire depends upon    (1 Mark)(a) its length (b) its thickness (c) its shape (d) nature of the materiaAns: (d)

Q 8. Far point for a normal eye is equal to    (1 Mark)(a) 25 cm (b) infinity (c) greater than 25 cm and less than 100 cm (d) less than 25 cmOr The human eye can focus oject at different distances by adjusting the focal length of eye lens. This is due to (a) presbyopia (b) accommodation (c) near sightedness (d) far sightedness Arts,Ans: (b) Far point for a normal eye is infinity while near point for normal eye is 25 cm.Or -(b) Accommodation is the ability of eye lens to focus both near and distant objects by adjusting its focal length.

Q 12. At the time of short circuit, the current in the circuit    (1 Mark)(a) vary continuously (b) increases heavily (c) decreases heavily (d) remains same Ans: (b) When live wire and neutral wire come in contact with each other, then it is known as shon circuiting. In this case, the resistance of the circuit is almost zero, which results in the flow of heavy current.

Q 14:  Assertion: A convex lens conform both real and virtual images.Reason : When an object is placed between the optical centre and focus of a convex lens a virtual image is formed.    (1 Mark)(i) A (ii) B(iii) C (iv) D Ans: (i) Both A and R are true and R is correct explanation of the assertion

Q 15. Based on the group valency of elements, write the molecular formula of the following compounds giving justification for each:    (3 Mark)
(i) Oxides of first group elements.
(ii) Halides of the elements of group 13, and
(iii) Compounds formed when an element A of group 2 combines with an element B of group 17
Ans: (i) Valency of group 1 element is 1. Valency of oxygen is 2.

Or
Identify the compound X on the basis of the reactions given below. Also, write the name and chemical formulae of A, B and C.

Q.17. On heating blue coloured powder of copper (II) nitrate in a boiling tube, black copper oxide, O2 and a brown gas X is formed.    (3 Mark)
(a) Identify the type of reaction and the gas X.
(b) Write balanced chemical equation of the reaction.
(c) Write the pH range of aqueous solution of the gas X.
Ans: (a) It is a decomposition reaction. The gas X evolved is N02 (Nitrogen dioxide).
(b) The balanced chemical equation is as under

(c) Because in F1 generation, recessive genes got expressed in homozygous condition.

∴ Total current in the circuit

Q 23: List three advantages each of :    (3 Mark)
(i)    exploiting resources with short term aims, and
(ii)    using a long term perspective in managing our natural resources
Ans: (i) Advantages of exploiting resources with
short-term alms:
1.  Beneficial for the present generation.
2. Growth of economy at a faster rate.
3. Comfort will increase.
(ii) Advantages of long term perspective in managing our natural resources :
1.    Resources can be used efficiently by present as well as future generations.
2.    Sustainable management of resources.
3.    Pollution and degradation of environment will be less.

Q 24.  A person needs a lens of power -4.5 D for correction of her vision.
(a) What kind of defect in vision is she suffering from?
(b) What is the focal length of the corrective lens?
(c) What is the nature of the corrective lens
or
How will you use two identical prisms so that a narrow beam of white light incident on one prism emerges out of the second prism as white light? Draw the diagram    (3 Mark)
Ans:
(a) Myopia
(b) f = 1/P = 1/-4.5 = - 2/9 = - 0.22 m
(c) Concave len
or
The second prism should be placed in the inverted position with respect to the first. This is shown in the diagram below

Q 25. (a) Explain why carbon forms covalent bond ? Give two reasons for carbon forming a large number of compounds.
(b) Explain the formation of ammonia molecule.    (5 Mark)
Ans: (a)  Carbon has electronic configuration 2, 4. It could gain four electrons forming C-4 anion or lose 4 electrons to form C+4 cation. Both are not possible due to energy considerations.
Carbon overcomes this problem by sharing electrons and forming covalent compounds.
Two masons for forming large number of compounds am:
1.    Catenation
2.    Tetra valency'
(b)    Formation of NH3 molecule
N -2, 5
H - 1
Three hydrogen atoms each share their 1 electron with nitrogen to form three covalent bonds and make an ammonia molecule (NH3).

Q 28. ‘The sexual act always has the potential to result in pregnancy'. What approach would you use to prevent pregnancies?    (5 Mark)
Or What would result if fertilisation takes place in humans? Also, incorporate the post-fertilisation changes.
Ans: The prevention of pregnancy is called contraception or birth control. The methods of contraception are summarised in the following table
Methods of Birth Control

or
The fusion of the nucleus of the sperm (male gamete) and ovum (female gamete) is known as fertilisation This process occurs only when both the sperm and an egg is present in the oviduct at the same time. The sperm enters into the vagina by the process of copulation or mating. The sperms are highly active and motile. They swim into the uterus through cervix and then pass into the oviduct. When a sperm reaches the egg, it penetrates the ovum. Syngamy or fusion of male and female nuclei occurs to form a zygote. The zygote undergoes many cycles of cell division to form an embryo.
The embryo sinks down and reaches into the soft and thick lining of the uterus. The embedding of thr embryo in the thick lining of the uterus is known as implantation.
During pregnancy, the placenta grows into a disc between the uterine wall and the embryo. Placenta form: finger-like projections called villi towards embryo, which provide a large surface area for the exchange o m itrifintc; and waste nrndunts between the mother and the develoDina embrvo.

Q 29.  An object is placed at a distance of 60 cm from a concave lens of focal length 30 cm.
(i) Use lens formula to find the distance of the image from the lens.
(ii) List four characteristics of the image (nature, position, size, erect/inverted) formed by the lens in this case.
(iii) Draw ray diagram to justify your answer of part (ii).
OR
(i) 4.5 cm needle is placed 12 cm away from a convex mirror of focal length 15 cm. Give the location of the image and the magnification.
Describe what happens as the needle is moved further from the mirror.
(ii)    What kind of mirror is used in a solar furnace ? Give reason for using this mirror
(iii)    One half of a convex lens is covered with a black paper. Will this lens produce a complete image of the object ? justify your answer.    (5 Mark)
Ans:
(i) Given u = - 60 cm, f = -30 cm
Using lens formula, 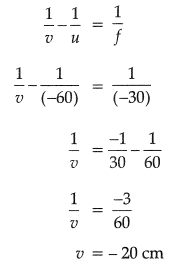 (ii) Distance of the image will be 20 cm in front of lens.
(ii) Nature: Virtual
Position: Between F1 and O or on same side of lens where object is placed.
Size : Diminished and 1/3 rd of object As the needle moved farther from the mirrot image to the focus and size of the image goes on decreasing
(ii) Concave mirrors are used in solar furances, as they concentrate solar in the focal plane and help in attaining high tempratures.
(iii) When one half of a convex lens is covered with a black paper, the lens will produce the complete image of the object of the object, but the intensity of the image is reduced because rays only from the top portion of the lens are regracted and form the image.

Q 30.  Draw ray diagrams showing the image formation by a concave lens when an object is placed.
(a) at the focus of the lens
(b) between focus and twice the focal length of the lens
(c) beyond twice the focal length of the lens
Or
(a) State laws o f refraction.
(b) A ray of light enters from a medium A into a slab made-up of a transparent substance B (as shown in the figure).
Refractive indices of medium A and B are 2.42 and 1.65 respectively. Complete the path o f ray of light till it emerges out of the slab.    (5 Mark) 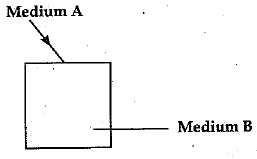 Ans:
The diagrams are as shown.
(a) Object placed at the focus.

(b) between focus and twice the focal length of the lens

(c) beyond twice the focal length of the lens

or
(a) The two laws are:
(i) The incident ray, the refracted ray and the normal to the interface of two transparent media at the point of incidence, all lie in the same plane.
(ii) The ratio of sine: of angle of incidence to the sine of angle of refraction is a constant, for the light of a given colour and for the given pair of media. This law is also known as Snell's law of refraction.
(b) The path of rays is as shown in figure.