The document Notes | EduRev is a part of the Class 9 Course Mathematics (Maths) Class 9.
All you need of Class 9 at this link: Class 9

As seen, ODB is a right angled triangle and by property, we know that, perpendicular from the centre to the chord bisects the chord in equal part.

Draw OP ⊥ ABWe know that the perpendicular from the centre of the circle bisects the chord.

In right ΔOPA, we have

Questions 16 to 20 carry one mark each

Q.20. A cone, a hemisphere and a cylinder stand on equal bases and have the same height.Then, find the ratio of their volumes.Ans: Let radius of hemisphere is r.

Questions 21 to 26 carry two marks each 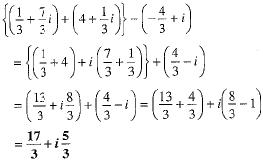 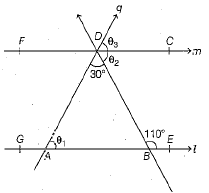 Q.27. Prove by using the principle of mathematical induction for all n ∈ N that:

times its abscissa.Ans: Let the abcissa of the point be a, then ordinate will be 3/2aSo the coordinate of the point will be

So, Co-ordinate of the point is (2,3)Q.29. Prove that among all the chords of a circle passing through a given point inside the circle that one is smallest which is perpendicular to the diameter passing through the point.OrTwo circles intersect at two points B and C, see given figure. Through B, two line-segments ABD and PBQ are drawn to intersect the circles at A, D and P, Q respectively. Prove that : ∠ACP = ∠QCD

Ans: Let P be the given point inside a circle with centre O. Draw the chord AB which is perpendicular to the diameter XY through R Let CD be any other chord through R Draw ON perpendicular to CD from 0. Then AONP is a right triangle (see fig.). Therefore, its hypotenuse OP is larger than ON. We know that the chord nearer to the centre is larger than the chord which is farther to the centre.Therefore, CD > AB. In other words, AB is the smallest of all chords passing through P

OrSince angles in the same segments of a circle are equal∴ ∠ACP = ∠ABP  ...(i)Similarly, ∠QCD = ∠QBD ...(ii)Also, ∠ABP = ∠QBD ...(iii)     [vert. opp. ∠s]From (i), (ii)a nd (iii), we obtain∠ACP = ∠QCDQ.30. Write the coordinates of the vertices of a rectangle, whose length and breadth are 6 units and 3 units respectively, one vertex at the origin, the longer side lies on the F-axis and one of the vertices lies in the II quadrant. Also, find the area of the rectangle.Ans: Let us draw the coordinate axes XOX' and YOY', and choose a suitable units of distance on the axes.Let 1cm = 1 unit.Mark a points on Y-axis at a 6 units distance in positive direction of Y-axis and mark a point C on X-axis at a 3 units distance in negative direction of X-axis. Now, draw a perpendicular line from C and A, which meets at a point B. 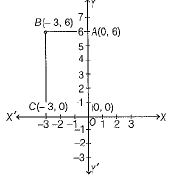 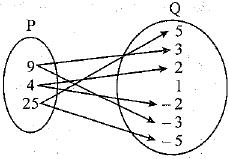 Hence, PQ bisect the common chord AB∴ AC - BC   (c.p.c.t.).. .(i)[∴ Hence common chord bisect by the line segment PQ.]Also, ∠ACQ+∠BCQ =180°  (Linear pair)2∠ACQ - 180° ∠ACQ = 90°∴ PQ⊥AB ...(ii)Thus line through their centre is the perpendicular bisector of the common chord.Hence Proved.ORLet ABCD be a quadrilateral in which the angle bisectors AH, BF, CF and DH of internal angles of A,B,C and D respectively form a quadrilateral EFGH 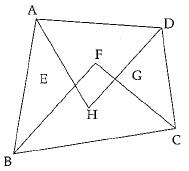 To prove : EFGH is a cyclic quadrilateral i.e

[∴ Angles A and B are bisector angles] Similarly ∠FGH = ∠CGD

[∴ Angles C and D are bisector angles]On adding Eqs (i) and (ii), we get 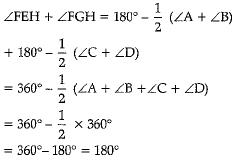 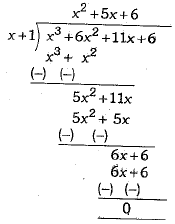 (i) Number of students who had taken only Chemistry

(ii) Number of students who had taken only Mathematics

(iii) Number of students who had taken only Physics 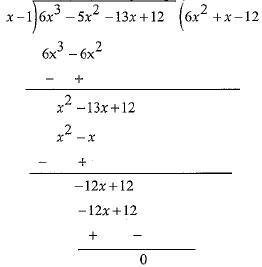 Q.37. In the given figure, ABCD is a square. ΔDEC is an equilateral triangle. Prove that :

ΔABC and ΔDBC are two isosceles triangles on the same base BC and vertices A and D are on the same side of BC (see fig.). If AD is extended to intersect BC at Pf show that : 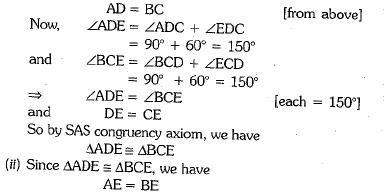 [by c.p.c.t.]
Or
Given : ΔABC and ΔDBC are isosceles triangles having common base BC, such that
AB = AC and DB = DC.
To Prove :(i) ΔABD ≅ ΔACD
(ii) ΔABP ≅ ΔACP
(iii) AP bisects ∠A as well as ∠D
(iv) AP is the perpendicular bisector of BC.

Hence, AP is the perpendicular bisector of BC.

Q. 39. Find the term independent of x in the expansion of

Q.40. Draw a histogram of the weekly expenses of 125 students of a school given below : 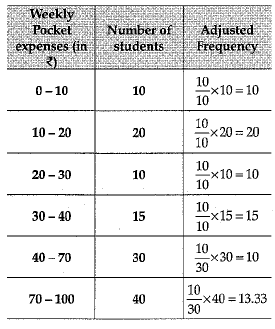 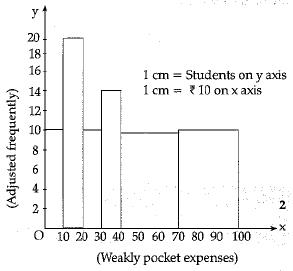