The document Sample Question paper - 6 Class 9 Notes | EduRev is a part of the Class 9 Course Sample Papers For Class 9.
All you need of Class 9 at this link: Class 9

Q.2. Why the makers of our Constitution thought of a special system of reserved constituencies for Scheduled Castes and Scheduled Tribes?(a) They are the most weaker section in our society.(b) Influential and resourceful person may prevent the weaker section to cast their votes.(c) If weaker section cannot vote, assemblies and parliament would be deprived of the voice of a significant section of our population.(d) All of the above
Ans: (d) All of the aboveQ.3. Study the picture and answer the question that follows 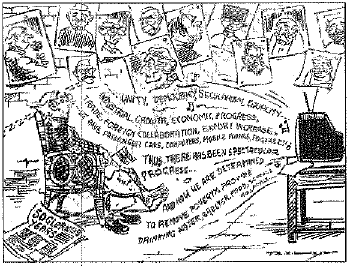 Q.9. Over half of the world's pastoral communities live in(a) India(b) Africa(c) America(d) Australia
Or
Approximately what proportion of India's landmass was under cultivation in the year 1600?
(a) One-eighth
(b) One-sixth
(c) One-fourth
(d) One-third
Ans: (b) Africa Or (b) One-sixth

Q.11. The National Human Rights Commission (NHRC) work like any court. How? OrWhat is a Summon?
Ans: The NHRC can summon witness, question any government official, idemand any official paper and send its own team for the spot inquiry etc, which are also the works of any court.OrSummon is an order issued by a court asking a'person to appear before it.

Q.15. Study the picture and answer the question that follows. What is being carried in the baskets shown in this picture?(a) Food items for distribution to the poor(b) Textbooks for schools(c) Currency notes(d) Gifts and toys for childrenAns: (c) Currency notesQ.16. NREGA provides 100 days assured employment every year to rural house holds in 200 districts.Ans: True.Q.17. Find the Incorrect optionA reserved constituency is that which is reserved for(a) Scheduled Castes(b) Scheduled Tribes(c) Minority Community(d) Disabled personsAns: (d) Disabled personsQ.18. Arrange the following anti-poverty programmes in chronological order based on the year of their launch:(i) Mahatma Gandhi National Rural Employment Guarantee Act (MG-NREGA)(ii) National Food for Work Programme (NFWP)(iii) Prime Minister Rozgar Yozana (PMRY)(iv) Swarnajayanti Gram SwarozgarYojana (SGSY)Options(a) (iv), (iii), (i), (ii)(b) (ii), (iv), (i), (iii)(c) (ii), (i), (iii), (iv)(d) (ii), (i), (iv), (iii)Ans: (a) (iv) - (iii) - (i) - (ii)Q.19. State one drawback in the electoral system of Fiji.Ans: Fiji electoral system is such that the vote of indigenous Fiji has more value than that of an Indian Fiji.Q.20. The area drained by a single river system is called a drainage basin. Any elevated area, such as a mountain or an upland separates two drainage basins. Such an upland is known as(a) Gorge(b) Water divide(c) Cut offs(d) None of theseAns: (b) Water divide

Q.35. Three items (a), (b) and (c) are shown on the given political outline map of the world. Identify them and write their correct name on the line marked on the map with the help of information given :
(а) Member of Axis Power.
(b) Member of Allied power.
(c) A member of Allied Power in W.W. II. 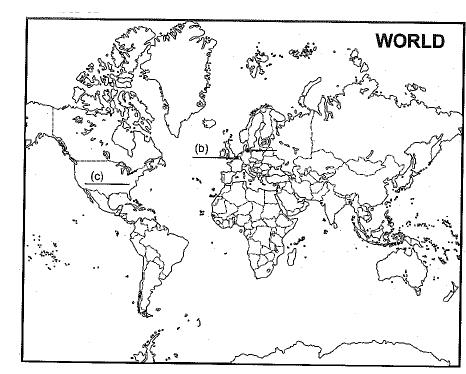