The document Sample Question paper - 8 Class 9 Notes | EduRev is a part of the Class 9 Course Social Studies (SST) Class 9.
All you need of Class 9 at this link: Class 9

Q.1. Who was Captain Swing ? (a) A mystic name. (b) Captain in the army. (c) Any honorary captain. (d) None of the above.Ans. (a) A mystic name.Q.2. Socialist and trade unionists formed a Labour Party in Britain because(a) they wanted better living(b) they wanted better working conditions(c) they setup funds to help its member in times of distress(d) All of the above Ans. (d)Q.3. People under the International Poverty Line are living on less than......... per dayOrOne of the major causes of poverty in India is lack of ...........Ans. US $1 Or land resourcesQ.4. In which of the following cities was the Imperial Forest Institute set up ?(a) Dehradun    (b) Delhi(c) Calcutta    (d) HaridwarAns. (a)  Q.5. Zimbabwe attained independence from White Minority Rule in(a) 1980 (b) 1985 (c) 1988 (d) 1990 Ans. (a)Q.6. How can we invest in human capital?OrWhat does HYV stand for ?Ans. We can invest in human capital through education, training and medical car.Q.7. The easternmost longitude of India is__________.Ans. 97° 25' EQ.8. Correct the following statement and rewrite.The first and third estates were forced to give up their power after the French Revolution.Or The members of the Jacobin Club belonged mainly to the rich section of the society. Ans. The first and second estates were forced to give up their power after the French Revolution.OrThe members of the Jacobin Club belonged mainly to the less prosperous section of the society.Q.9. How many biosphere reserves have been set up by the Government of India to protect flora and fauna?(a) Twelve    (b) Fourteen (c) Eighteen (d) TwentyAns. (c)Q.10. The hot weather season remains from (i)_______ to (ii)__________ .Ans. (i) March, (ii) MayQ.11. Who are known as Jadidists ?Or What is Kolkhoz ?Ans. The term ‘Jadidists' denotes the Muslim Reformers within the Russian iempire.Orin Russia, the Bolshevik Party forced ail peasants to cultivate in collective farms in early 20th century. These collective farms are known as ‘Kolkhoz'.Q.12. The lowest poverty rate in India is found in(a) Kerala    (b) Punjab (c) West Bengal (d) Tamil NaduAns. (a)Q.13. Under waste land rules the uncultivated land was taken from the pastoralists and given to individuals for cultivations.Ans. TrueQ.14. A communication issued by an appropriate authority stating the policy or decision of the government is known as ...........Ans. Office MemorandumQ.15. Study the picture and answer the question that follows. 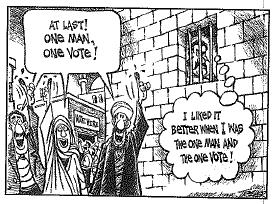 Who is inside the jail? (a) Pervez Musharraf (c) Robert Mugabe(b) Saddam Hussain (d) Ferdinand MarcosAns. (b)Q.16. What is subsistence crisis ?Ans. Subsistence crisis is an extreme situation where the basic means of livelihood are endangered.Q.17. Find the incorrect option.Republic means(a) the head of the state is an elected person (b) the head of the state is a hereditary monarch (c) it has a single sovereign state (d) republican ideas were specially spreading in Asia.Ans. (b)Q.18. Arrange the following events in the correct chronological order due to which General Musharraf established his rule in Pakistan(i) Musharraf issued a 'Legal Framework Order' by which the President can dismiss the national or provincial assemblies.(ii) Musharraf overthrew a democratically elected government, by a military coup and declared himself Chief Executive of the country.(iii) Elections were held to the national and provincial assemblies.(iv) Musharraf changed his designation to President.Options(a) (iv), (iii), (i), (ii)    (b) (ii), (iv), (iii), (i)(c) (ii), (i), (iii), (iv)   (d) (ii), (iv), (i), (iii)Ans. (d)Q.19. What is the total land mass of India ?Ans. The land mass of India has an area of 3.28 million square km.Q.20. The loss of finest grazing lands and water resources created pressure on the small area of land that the Maasai were confined within. Continuous grazing within a small area inevitably meant a deterioration of the quality of pastures.What is the consequence of this restriction?(a) Feeding the cattle became a persistent problem.(b) Large number of Maasai cattle died of starvation.(c) The Maasai tribes agitated and complained against the government's policy.(d) Both (a) and (b)Ans. (d)

Q.29. Which groups of French society benefited from the revolution ? Which groups were forced to relinquish power ? Which sections of society were disappointed with the outcome of the revolution ?
Ans. (a) Groups benefited from the revolution were peasants and middle classes as mentioned below :
(i) Tithes from peasants was abolished.
(ii) The obligations and taxes under the feudal system were abolished. As a result of it peasants were benefited.
(iii) Eight to vote was granted on limited scale but other rights were included in the Declaration of Rights of Man and Citizen,
(b) The groups forced to relinquish power were as given below :
(i) Members of the clergy were forced to give up their privileges.
(ii) The land owned by the Church was confiscated.
(iii) On 4 August 1789, the Assembly abolished the feudal system of obligation and taxes,
(c) On the whole clergy and nobility were disappointed with the outcome of the revolution.
Or
How would you explain the rise of Napoleon ?
Ans. After the fall of the Jacobin government, a new constitution was introduced. The new constitution denied the vote to non-propertied sections of the society. It, therefore, allowed the wealthier middle classes to seize power. It provided for two elected legislative councils. These then appointed a Directory, an executive made up of five members. This was meant as a safeguard against the concentration of power in a one-man executive as under the Jacobins. However, the Directors often clashed with the legislative councils, who then sought to dismiss them. The political instability of the Directory paved the way for the rise of a military dictator, Napoleon Bonaparte.

Q.31. State any three ill-effects of poverty. Also mention some solutions to remove this.
Or
What is poverty line'? Write about the group vulnerable to poverty in our country
Ans. The state or condition of having little or no money, goods or means of support and deficiency of necessary or desirable ingredients is known as poverty.

Poverty has its ill effects which as follows :
(i) Malnutrition and Insufficient Diet Poverty is the leading cause of insufficient diet and inadequate nutrition. The resources of poor people are very limited, and its effect can be seen in their diet.
(ii) Poor Living Condition They do not get proper living conditions, “ hey have to fight the hardship of poverty to secure food, clothes and shelter. A large number of poor families live in houses with one room only.
(iii) Unemployment Since poor people are mostly illiterate and unskilled, there are very few employment opportunities open for them. Due to unemployment, many poor people are forced to live an unfulfilled life.
Measures to Remove Poverty Measures to remove poverty are as follows:
(i) Farmers should be given agricultural inputs to increase productivity as large number of farmers are poor.
(ii) Family planning schemes should be introduced as small family leads to better living conditions.
(iii) Corruption must end and our offices should work efficiently so that poor people could enjoy government facilities.
Or
Poverty line is an imaginary line used by any country to determine its poverty. It varies from time to time, place to place and country to country. In India, a subsistence level or minimum level of food requirement (as determined by its calorie value), clothing, footwear, fuel, lighting, educational and medical requirements etc are determined for estimating poverty line.

Poverty among social groups and economic categories varies widely in India. Here, socially vulnerable groups include the households of the Scheduled Castes (SCs) and Scheduled Tribes (STs).
Economically vulnerable groups comprise rural landless labour households and urban casual labour households.
During the last few years, all these groups except the Scheduled Tribes group have witnessed a decline in poverty. In poor families all suffer but some like women, elderly people and female infants suffer more and are regarded as the poorest of the poor in our society.

Q.33. Elucidate the peculiar features of Nazi thinking that made it different from any other organisation of that time.
Ans. The peculiar features of Nazi thinking were as follows :
(i) Nazism was a system of ideas about the world and politics which was synonymous with Hitler’s word view that only believed in racial hierarchy. Nazi was against equality among people and supported hatred on the basis of race.
(ii) Nazi considered Nordic German Aryans as the best and Jews as the worst race. All other people were placed in between depending upon their external features.
(iii) From a very young age, children were indoctrinated both inside and outside school with Nazi ideology of nationalism and war. Women were seen as mere bearers of the Aryan culture ane race.
(iv) Nazi believed in the geopolitical concept of Lebensraum or living space, i.e. new territories had to be acquired for settlement, it would enhance the area of the mother country as well as the material resources and power of the German nation.
(v) Nazism was strongly opposed to democracy, liberalism and internationalism. Nazism was aggressive, expansionist and imperialistic

Q.34.  Which was the important law that came into effect soon after the storming of the Bastille in the summer of 1789? How did it change the lives of the common people? Explain
Ans. After the fail of Bastille in the summer of 1789, one important law that came into effect was the abolition of censorship. Before French Revolution, all written material and cultural activities, books, newspapers, plays could be published or performed only after they have been approved by the censors of the king.
This law changed the lives of the common people in the following ways:
(i) The Declaration of the Rights of Man and Citizen proclaimed freedom of speech and expression to be a natural right.
(ii) Newspapers, pamphlets, books and printed pictures flooded the towns of France, from where they could rapidly reach to the countryside.
(iii) Freedom of press meant that opposing views of events could be expressed.
(iv) Plays, songs and festive procession attracted common men through which they could identify the ideas of liberty or justice of the political philosophers. 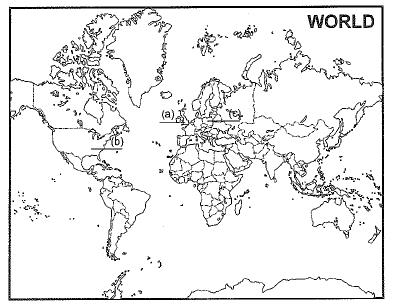