A higher domestic saving rate makes larger investment possible in an economy and hence is a necessary condition for economic development. Also, in an open economy framework, domestic savings are supplemented by foreign savings.

Since foreign savings may imply liability to the domestic economy, it is necessary that domestic savings rates should be increased and resort to foreign savings should be minimised. Experiences indicate that a saving rate of up to 20 per cent is essential for any economy to achieve a respectable growth rate.

Rate of saving is measured as a proportion of GDP at market prices. The rate of saving in India in 1950-51 was 10.2 per cent of the GDP. Over the next twenty years, its trend varied marginally, to touch a rate of 16.3 per cent in the year 1972-73. During the decade of 1970s, there was a significant improvement in the savings rate which rose to 26.0 per cent in 1979-80. In light of this, the late 1970s was referred to as the golden era in the Indian savings scene.

The growth in saving is attributed to factors like:

i. Rising per capita income;
ii. Continued deepening of the financial system; and
iii. The diminishing share of agriculture in GDP. 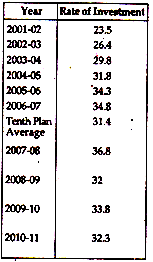 The public sector includes government administration, departmental undertakings, government companies and statutory corporations. The private corporate sector comprises of non-government non-financial corporate enterprise. The rest is termed household sector. Thus, the household sector, being residual in character, includes a host of economic agents who engage in production/consumption activity as shown in Table 5.2 below.

Among the three sectors, as in most other countries, the household sector in India too contributes the bulk-more than two-third of the total savings. The government sector and the corporate sector contribute the balance, i.e. about one-third of total saving in the country. 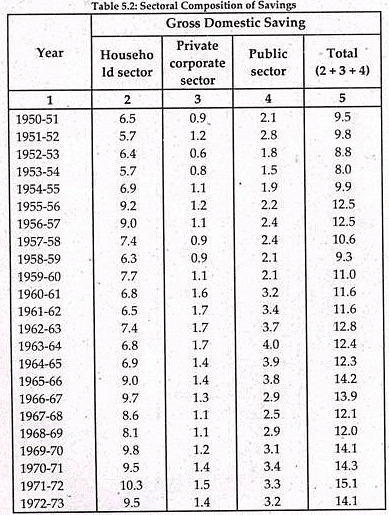 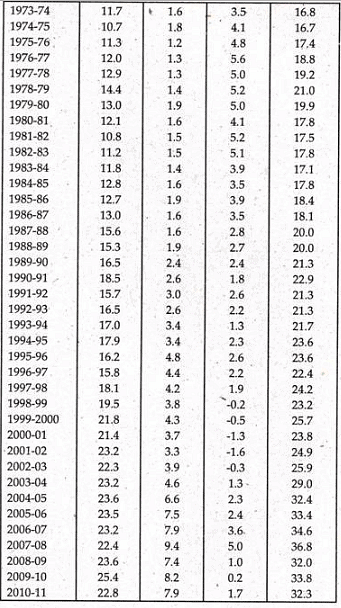 Main sources of savings in India are as follows:

The household sector is the largest contributor to domestic saving. It is important as it reflects how efficiently savings are converted into investment with the role of financial sector’s intermediation in the process. These sectors include the saving of:

Household savings can be divided into three parts, as follows:

(c) The Unaccounted Savings of the Household Sector:

The unaccounted savings of the household sector are always kept in the form of gold, silver and durable goods on which information is very scanty. However, on the basis of estimates the proportion of these assets is placed in a range of 3 to 10 per cent of the GNP in any year.

Among the factors responsible for this trend, the most important are:

(a) Deterioration in the overall tax GDP ratio, and
(b) The increasing losses over time made by public sector utilities such as state Electricity and Water Boards, State Road transport Corporation, and the Railways.

In developed countries, the corporate sector has contributed, significantly to national savings, while it has not done so in India, in spite of the development within the secondary and tertiary sectors of the economy and the significant increase in manufactured output.

This is attributed to the following factors:

(a) Massive increase in the use of loan capital in Indian industry and the fall in the share of profits in factor incomes;
(b) Significant position of the unincorporated private sector in Indian manufacturing and commerce which is reflected in household savings and not in the ‘private corporate savings’; and
(c) The taxation policy, which discourages the accumulation of undistributed profits in companies and corporations coupled with a low profitability syndrome.