The document Scalar and Vector Potentials - Electromagnetic Theory, CSIR-NET Physical Sciences Physics Notes | EduRev is a part of the Physics Course Physics for IIT JAM, UGC - NET, CSIR NET.
All you need of Physics at this link: Physics

• The wave equations for the electromagnetic potentials.

is defined so that the magnetic field

Note that in general, the scalar and vector potentials are functions of position and time. 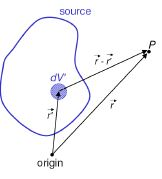 The electric field in the presence of a static charge distribution

is found from Coulomb’s law: 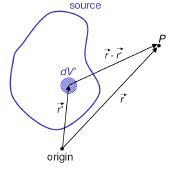 In terms of the scalar potential, for a static charge distribution, we have:

to find the electric field.

Since we have from Maxwells’ equations:

it follows that in an homogeneous, isotropic medium:

Equation (4) is the solution to Poisson’s equation, expressed as an integral.

, rather than by the potential.

for an electrostatic field, we can add any function with vanishing gradient to the potential φ, and obtain the same physics. In other words, the behaviour of any electrostatic system is the same under the transformation:

is a constant (independent of position).

The freedom that we have in choosing the potential is called gauge invariance.This allows us to choose arbitrarily the point at which

Note that if we write the solution to Poisson’s equation (4):

then implicitly (assuming that all charges are within a finite distance from the origin), we make the gauge choice:

where the integral extends over all space.Generally, the Biot-Savart law is difficult to apply.It is often easier to first calculate the magnetic vector potential; but first, we need to derive the differential equation for the vector potential.

In a static case (constant fields, charges and currents), the magnetic field is related to the current density by:

, and using the vector identity:

This looks like a complicated equation; but there is a way to simplify it...

where f is some function of position. Let us define a new vector potential

However, if we choose

In other words, given a vector potential, we can always choose to work with another vector potential that gives the same field as the original one, but that has zero divergence.

Assuming that we make such a choice, then equation (15) for the vector potential becomes:

This is again Poisson’s equation - or rather, three Poisson equations, one for each component of the vectors involved.