Q.2. What does increasing marginal opportunity cost along a PPC mean?

Q.3. Why does PPC is concave to origin?

Q.4. What does slope of PPC indicates?

Q.5. What does rightward shift in PPC indicates?

Q.6. Give two example of under-utilization of resources?

Q.7. Give two example of Growth of resource?

Q.8. A lot of people die and many factories are destroyed because of a severe earthquake in a country. How will it affect country’s PPC?

Q.9. Draw a PPC and indicate(a) Full employment(b) Under utilization of resources(c) Growth of resources

Q.10. “Do all economics have same type of central problem”? Comment

Q.11. What are the feature/property/nature/characteristic of PPC?

Q.12. “An economy always produces on but not inside a PPC” Defend or Refute?Ans. Refute, The economy may not be operating on the curve, it will operate within the PPC (at point F or G) if(a) Resources are inefficiently worked (machine and plant kept idle or inefficient technology)(b) There are under-utilization or unemployment of resources (massive unemployment in India) Any point outside the PPC such as point G shows unattainable combination of resources , however PPC curve can shift Rightward due to growth of resources and improvement in technology.

Q.14. What do you mean by Economics problem and why there is need for economising of resources?

Q.15. What are the causes of Central Problem or economic problem?
OR
why does they arises?

Q.16. “There is no aggregation in micro economics as it deals with single unit” Comment

Q.19. A country produces two goods: green chilli and sugar. Its production possibilities are shown in the following table. Plot the PPC in a graph paper. What is the pattern in the table that gives rise to the concave shape of the PPC? 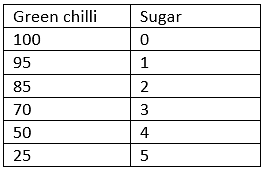 Q.22. State related branch of economics for
(a) Cotton Textile Industry
(b) Price determination of a commodity.

Q.23. Why is study of the problem of unemployment in India considered a macro economic study?

Q.24. Is Study of problems of agricultural labour in India a macroeconomics study?

Q.25. State are the following Micro or Macro variable 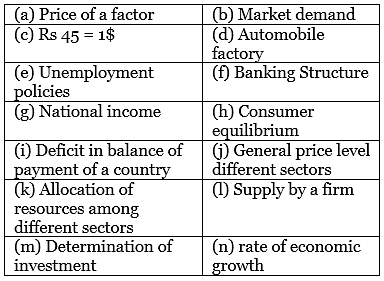 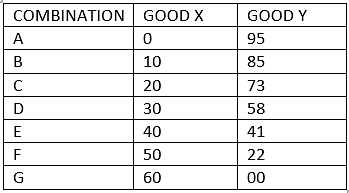 Q.27. The following is a production possibility table for war goods and civilian goods

C.B.S.E QUESTIONSQ.1.(a) What does the problem ‘for whom to produce’ refers to?(b) Give two examples of study of micro economics?(c) Give one reason for a rightward shift of PPC?

Q.2. Why does the problem of choice arises?

Q.4. What are the three central problems of an economy? Why do they arises?

Q.5. Explain the problem of ‘what to produce’ with the help of an example.

Q.6. Explain the problem of ‘How to produce’ with the help of an example.

Q.7. What does a PPC shows? When will it shift to the right? With the help of a hypothetical table, draw a PPC?

Q.8. When is allocation of resources considered inefficient in an economy?

Q.9. What do you mean by scarcity?

Q.3 State the problems relating to allocation of resources in an economy. (3)Q.4 Explain the central problem of ‘choice of technique’. (3)

Q.5 Explain the central problem of the choice of products to be produced. (3)

Q.6 Explain the central problem of distribution of income. (3)

Q.7 Explain why a production possibilities curve is concave. Or Explain Problem “Whom to produce”? (3)

Q.2. Why do problems related to allocation of resources in an economy arise ? Explain (3)

Distinguish between microeconomics and macroeconomics. Give examples.

Q.3. State two features of resources that give rise to an economic problem. (1 Mark)

Q.4. Explain the shape of a production possibility frontier. (1 Mark)

Q.5. How is production possibility curve affected by unemployment in the economy? Explain.

Q.7. Define Production Possibilities Curve. Explain why it is downward sloping from left to right.

Q.8. Explain how PPC is affected when resources are inefficiently employed in an economy?  CBSE (F) 2011

Q.9. What is Marginal rate of Transformation ? Explain with the help of an example.  CBSE (F) 2012

Q.10. Explain, giving reason, why production possibility curve is concave. CBSE (F) 2012C.B.S.E & Sample Paper 2013Q.1. A country’s resources are fully and efficiently employed. The problem of scarcity exists. What advise will be given to raise the efficiency level of the human resource to fight scarcity?(1 mark)Ans. Spread of education and training.Q.2. Economic slowdown in some parts of the world has adversely affected demand for Indian exports. What will be its effect on the production Possibilities frontier of India? Explain. (3 marks)Ans. There will be no effect on PPF. It is because PPF shows only what a country can potentially produce, and not what it actually produces. Slowdown by reducing demand for exports, may ultimately bring down output. Assuming that the country’s actual production is somewhere on the PPF, Slowdown may result in the country producing at a point somewhere below the PPF.Q.3. Production in an economy is below its potential due to unemployment. Govt. starts income  generation schemes. Explain its effect using Production possibility Schedule? (3 Mark) (D)Ans: Production below the potential means that total production in the economy is somewhere below the production possibility curve PP’, for example at point U in the diagram. When government starts employment generation schemes, and since the below potential production is due to unemployment, the economy moves forward i n its attempt to remove unemployment and reach the potential. The movement forward is towards the PP’ curve. (Any other individual response with suitable justification should also be accepted)Q.4. Explain the meaning of opportunity cost with the help of production possibility schedule.

With the help of suitable example explain the problem of ‘for whom to produce’. (4 Mark)Ans. Goods and Services are produced for those who have the purchasing power or income to buy those goods and services. Therefore, the problem of ‘for whom to produce’ amount to the problem of distribution of income in the society.Q.5. How in any one way can an economy increase its production capacity? (1 Mark) (C)Q.6. Explain the Problem of What to produce and explain why it arises? (F)Ans. With fixed resources, the economy can produce several combinations of different goods produced. The problem is that which combination should be produced. The problem arises because resources are fixed.Economic problem arises on account of three reasons. First, the wants of the people are unlimited. Second, the resources available to meet these wants are limited. Third, the resources have alternative uses. The problem essentially is that which wants should be satisfied.Q.7. Define opportunity cost?Ans. The value of the next best alternative foregone while availing the given alternativeC.B.S.E Paper 2014Q.1. The government has started promoting foreign capital. What is its economic value in the context of Production Possibilities Frontier?(1 M)Ans. It will increase inflow of foreign capital. Its economic value is the rise in production potential due to increase in resources.Q.2. Why is Production Possibilities Curve concave? Explain. (3Mark)Ans. A typical PP curve is downward sloping and concave, i.e. its slope is increasing, because marginal Rate of Transformation (MRT) increases as we move downwards along the curve.MRT increases because no resource is equally efficient in production of all goods. As the resources are transferred from one good to another MRT increases because less and less efficient resources are to be transferred each time.Q.3. Unemployment is reduced due to the measures taken by the government. State its economic value in the context of PPF ? (3 Mark)Ans.  The economic value of reduction in unemployment is that it will help the economy in realizing its production potential.Q.4. Define a PP curve. State its any two assumptions and two features. Why does PP curve look concave to the origin? (6 Mark)Q.5. Large number of technical training institutions have been started by the government. State its economic value in the context of production possibilities frontier.  (1 Mark) (F)Ans. The economic value of technical training is that it raises the production potential of the country by raising the efficiency of the labour.Q.6. Name the economic value achieved through the spread of education in the context of production potential. (1 Mark) (C)Ans. It will result in increase in efficiency leading to economic growth.Q.7. Name the economic value achievable when attempts are made to increase resources in the country. (1 Mark) (C)Ans. Economic growth.Q.8. Why is production Possibility curve Downward sloping ? (F)Ans. PPC is downward sloping because to produce more of one good, the economy has to produce less of the other good. It is because resources are fixed.Sample Paper 2015Q.1. Using a diagram explain what will happen to the PPC of Bihar if the river Kosi causes widespread floods ?  (3 Mark)Ans. If the river Kosi causes widespread floods in Bihar, it will lead to destruction of resources in Bihar. This will shift the PPC leftward.Initial PPC is PP with floods, the PPC will shift to P1P1

Q.4. State any two central problems under ‘problem of allocation of resources’.Q.5. Define Marginal Opportunity Cost. Explain the concept with a hypothetical numerical example. (4 Mark)Q.6. Define normative economics, with a suitable example. (1 Mark)Ans: Economics as a ‘normative science’ deals with situations of value judgments or condition of ‘what ought to be’.(1/2)Example: India should create more employment opportunities.(1/2)Q.7. State any one assumption for the construction of the curve that shows the possibilities of potential production of two goods in an economy. (1 Mark)Ans: Increasing marginal opportunity cost or any other valid assumptionQ.8. Explain the concept of marginal opportunity cost using a numerical example. (4 Mark)Ans: Marginal Opportunity Cost (MOC) of a given commodity along a PPC is defined as the amount of sacrifice of a commodity so as to gain one additional unit of the other commodity.MOC can also be termed as Marginal Rate of Transformation i.e. the ratio of number of units of a Good sacrificed to produce an additional unit of the other Good.
Marginal opportunity cost of a good in terms of the other good can be estimated as:  (2 Mark)
MOC = loss of output of good Y = Y2  - Y1
(MRT) gain of output of good X = X2 - X1
Marginal opportunity signifies the rate of sacrifice of good Y

Example: In the given schedule, If we want to move from combination A to combination B, we will produce one additional unit of X, but we will have to forgo 2 units of Y. The marginal opportunity cost of X in terms of Y at this stage is 2 units, similarly for other combinations too can be worked out.