The document Scanner Chapter 14 - Balance of Payment, Macro Economics Commerce Notes | EduRev is a part of the Commerce Course Economics Class 12.
All you need of Commerce at this link: Commerce

(Q1) State any four items each of current and capital account of BOP.

(Q4) When will there be a surplus in balance of trade ?

(Q5) Which two transactions determine Balance of Trade or Merchandise?

(Q7) Distinguish between visible and invisible trade ? Give two example of each

(Q9) What is balance of visible item in BOP called ?

(Q14) State the nature of transactions that are recorded in current account of the B.O.P ?

(Q16) Distinguish between balance of trade and balance on current account.

(Q1) Distinguish between autonomous and accommodating transactions of balance of payments account.

(Q3) What is meant by balance of trade?

(Q4) Explain the meaning of deficit in Balance of Payments.

(Q3) Distinguish between balance of trade and balance on current account of balance of payments.

(Q3) Explain the difference between ‘autonomous investment’ and ‘induced investment’.

(Q1) Where is ‘borrowings from abroad’ recorded in the Balance of Payments Accounts ? Givereasons.

Ans :: ‘Borrowings from abroad’ is recorded in the ‘capital account’ of BOP account because it increases international liability of the country.

It is recorded on the credits side because it brings in foreign exchange into the country.

(Q2) Where will sale of machinery to abroad be recorded in BOP accounts ? Give reasons ?

(Q5) What is meant by ‘official reserve transactions’? Discuss their importance in Balance of Payments.

Ans :: Transactions by a central bank that cause changes in its official reserves. These are usually purchases or sales of its own currency in the exchange market in exchange for foreign currencies or other foreign currency denominated assets. They may be Autonomous Receipts and Autonomous Payments, disequilibrium between which may occur as deficit/surplus in balance of payment.

Ans :: Remittances from family members from abroad is accounted for under unilateral transfers of the current account.

(Q1) Foreign exchange transactions which are independent of other transactions in the Balance of Payments Account are called : (Choose the correct alternative)

(Q2) Foreign exchange transactions dependent of other transactions in the Balance ofPayments Account are called : (Choose the correct alternative)

(a) In which sub-account and on which side of the Balance of Payments Account suchlending is recorded ? Give reasons.(b) Explain the impact of this lending on market exchange rate.

(Q5) (a) In which sub-account and on which side of balance of payments account will foreigninvestments in India be recorded ? Give reasons.

(b) What will be the effect of foreign investments in India on exchange rate ? Explain.

(Q1) What are the categories of classifying transaction ?

(Q3) What is meant by unrequitted receipts ?

(Q4) How is unfavourable Balance of trade Offset ?

(Q5) BOT may be favourable or unfavourable or in equilibrium but BOP always balances in accounting sense ? Explain

(Q6) Balance Of payment always balances .Does it mean a situation of zero net obligation for a  country?

(Q7) What are official reserve transaction ? Explain their importance in the BOP ? 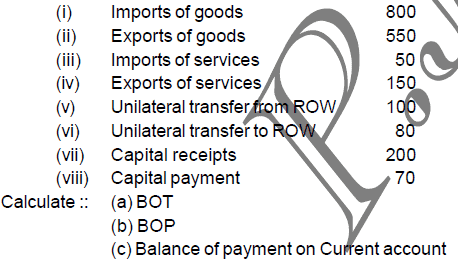 (Q10) “Deficit in current account of BOP necessarily always indicate a weak economy “ .Statement is true or false . Give reason for your answer ?

(Q11) Should a current deficit be a cause for alarm ? Explain.

Ans. Since deficit in current account is met by the surplus of capital account, it is not taken as a cause for alarm.

(Q12) Do you think that a surplus in capital account BOP reflects prosperity of the nation ?

(Q15) If the country’s current account of BOP shows a deficit of Rs. 200 crore and it is going toincrease, then how can it be financed ?

Ans. If there is current account deficit, then it can be restored or financed by a surplus of BOP on capital account by taking a loan or making a withdrawal from foreign exchange revenue, etc.

Ans. If BOT is in disequilibrium, then we will suggest the following measures to rectify the disequilibrium -(a) Export promotion (b) Import restriction (c) Import substitution.

(Q 17 ) In case of inflation, should we make more export or more import. Which one is better ?

Ans. In case of inflation, more import is better than export of goods. Duringinflation goods are not available in a country to fulfill the wants of people. Thus, it is better topurchase them from abroad. However, less export is better as goods which are in surpluscan be exported.