(Q1) Draw a straight line consumption curve. From it derive the saving curve. Explain the process of derivation on the diagram, show: (6M)

(b) The income level at which APS is negative

At zero level of income , there is an autonomous consumption of OC. The corresponding saving at this income level is (-)OC. The saving curve starts at (-)C.    (1M)

At the income level OB , where the 45o reference line intersects the consumption curve, C=Y .  At this income level , saving in equal to zero. Thus, we get point B on the x-axis of the saving curve. (1M) 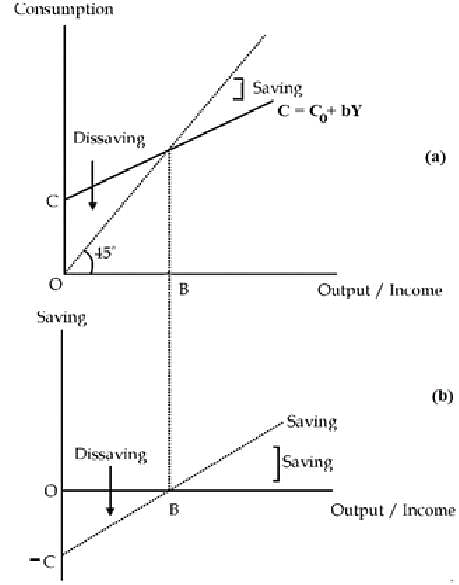 (Q2) If in an economy Saving function is given by S = (-) 50 + 0.2 Y and Y = Rs.2000 crores; consumption expenditure for the economy would be Rs.1,650 crores and the autonomous investment is Rs.50 crores and the marginal propensity to consume is 0.8. True or False?Justify your answer with proper calculations.

Ans: Yes all the given values are correct

(Q3) “Economists are generally concerned about the rising Marginal Propensity to Save (MPS) in an economy”. Explain why ?  (3M)

Ans: Since the sum of MPC and MPS is unity any increase in Marginal Propensity to Save (MPS) would directly lead to decrease in Marginal Propensity to Consume (MPC)  This means that may lead to lesser proportion of the additional income going to consumption which is a vital factor of Aggregate Demand/Expenditure. This may further lead to fall in equilibrium level of income in the economy.

Ans: Value of final products the buyers are planning to buy during a given period at a given level of income.

(Q3) Which of these cannot have a negative value ? Give reasons (a) APS (b) MPS

(Q5) Give the meaning of investment multiplier and aggregate supply and full employment.

(b) Aggregate supply is the total quantity of goods and services planned to be produced in an economy during a period .

(c) Full Employment is a situation when all those who are able and willing to work get employment at the prevailing wage rate.

Ans: It refers to the value of final goods and services which all sectors of an economy are planning to buy during a year

Ans: It is ratio of change in saving to change in income

(Q3) Given a consumption curve, outline the steps required to be taken in deriving a saving curve from it. Use diagram. (6M)

Ans: Aggregate Supply is obtained by adding consumption and saving schedules   The straight line obtained which will originate from point of origin will form a 45 degree angle there by establishing the relation of  Y = C+S At all points on 45 degree line, Consumption is equal to Income. It helps under the Keynesian Economic analysis . Since the two variables ( consumption / Aggregate Expenditure and Income) are measured in the same units , the 45-degree line has a slope of one and it bisects the 90 - degree angle formed by the two axes.

(Q5) State whether the following statements are true or false. Give valid reasons for your answers:

(a) Average propensity to save can never be negative.

Ans: False , at income levels which are lower than break-even point , Average propensity to save can be negative as there will be dissaving in the economy.

(Q6) Give the meaning of involuntary unemployment.

(Q1) Why does consumption curve not start from the origin ?  (1M)

(Q2) What is meant by aggregate demand ? State its components. (4M)

(Q2) What determines the size of investment ?

(Q4) Exlplain the component of equation C = c + by

(Q5) How  is AS measured or What are components of AS ?

(Q6) Distinguish between APC and MPC ? The value of  which of these two can be greater than one and when ?

(Q7) Explain relationship between APS and MPS ? The value of  which of these two can be negative and when ?

(Q8) Distinguish between APC and MPC with the help of numerical examples.

(Q9) Draw on a diagram a straight line saving curve for an economy. From it derive the  consumption curve, explaning the method of  derivation. Show a point on the consumption curve at which APC is equal to one ?

(Q10) Explain ‘consumption function’ with the help of a schedule and diagram.      ,or

Explain ‘consumption function’ with the help of a schedule. Also record marginal               propensity to consume in the schedule.

(Q13) Explain the distinction between voluntary and involuntary unemployment.What is the significance of these distinction

(Q15) Outline the steps required to be taken in deriving the Consumption Curve from the given Saving Curve. Use diagram.

(Q16) What is ex-ante aggregate demand ?

(Q17) Giving reasons, state whether the following statements are true or false  :

(a) Value of average propensity to save can never be less than zero.

(b) Value of MPS can never be negative

With the help of a numerical example show that in this economy as income  increases APC will decrease.