Q.2. State an important advantage of using alternating current (a.c.) over direct current (d.c.).                [1]Ans. Alternating current gets transmitted over long distances without much loss of electricity. This is the main advantage of using alternating current over direct current.Q.3. Answer the following questions on the bases of this paragraph:The growing size of the human population is a cause of concern for all people. The rates of birth and death in a given population will determine its size. Reproduction is the process by which organisms increase their population. The process of sexual maturation for reproduction is gradual and takes place while general body growth is still going on. Some degree of sexual maturation does not necessarily mean that the mind or body is ready for sexual acts or for having and bringing up children. Various contraceptive devices are being used by human beings to control the size of the population.(a). List two common signs of sexual maturation in boys and girls.   [1]Ans. Two common signs of sexual maturation in boys and girls:

(b). What is the result of reckless female foeticide?        [1]Ans. Due to reckless female foeticide, the ratio of the number of females to the number of males goes down and there is an imbalance in the overall sex ratio.(c). Which contraceptive method changes the hormonal balance of the body?     [1]Ans. Chemical method of contraception, i.e. the use of oral pills changes the hormonal balance of the body.

Consider the following properties of virtual images: (A) Cannot be projected on the screen(B) Are formed by both concave and convex lenses (C) Are always erect (D) Are always inverted The correct properties are (a) A and D(b) A and B(c) A, B and C (d) A, B and DAns. (c) A and B
Solution. A real image is formed by light rays after reflection and refraction when they actually meet or intersect with each other and when they actually converge at a focal point.

Ans. (c). A, B and CSolution. Virtual images cannot be projected on the screen, are formed by both concave and convex lenses and are always erect.

Q.10. At the time of a short circuit, the electric current in the circuit    [1] (a) Varies continuously (b) Does not change (c) Reduces substantially (d) Increases heavily

Two bulbs of 100 W and 40 W are connected in series. The current through the 100-W bulb is 1 A. The current through the 40-W bulb will be (a) 0.4 A (b) 0.6 A(c) 0.8 A (d) 1 AAns. (d) Increases heavilySolution. During a short circuit, when the two wires come in contact with each other, the resistance of the circuit so formed becomes very small, and thus, the current flowing in the circuit increases heavily.

Ans. (d) 1 ASolution. When appliances are connected in series, the current flowing in both appliances is the same. Thus, the current flowing through both bulbs will be 1 A.Q.11. Calcium oxide reacts vigorously with water to produce slaked lime.    [1] CaO(s) + H2O(l) → Ca(OH)2(aq)This reaction can be classified as(A) Combination reaction(B) Exothermic reaction(C) Endothermic reaction(D) Oxidation reactionWhich of the following is a correct option?(a) A and C(b) C and D(c) A, C and D(d) A and B

When hydrogen sulphide gas is passed through a blue solution of copper sulphate, black precipitate of copper sulphide is obtained and the sulphuric acid so formed remains in the solution. The reaction is an example of a(a) Combination reaction(b) Displacement reaction(c) Decomposition reaction(d) Double displacement reactionAns. (d). A and B
Solution. Calcium oxide reacts vigorously with water to produce slaked lime.
CaO(s) + H2O(l) → Ca(OH)2(aq) is a combination reaction and is an exothermic reaction. Q.17. (a) Draw the structures for (i) ethanol (ii) ethanoic acid.
(b) Why is the conversion of ethanol to ethanoic acid considered an oxidation reaction?
Write the oxidising agent used in the reaction involved.        [3]
Ans. (a)

(b) Conversion of ethanol to ethanoic acid is considered an oxidation reaction as oxygen is added to ethanol to form ethanoic acid in the presence of alkaline KMnO4. Alkaline potassium permanganate (KMnO4) is used as an oxidising agent in the reaction. What is the term given to the sequence of events occurring in the diagram?

(a) What is tropism?
(b) How do auxins promote the growth of a tendril around a support? [3]
Ans. 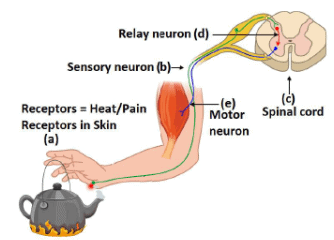 The sequence of events or the pathway of nerve impulses during reflex actions constitutes a reflex arc.

(a) Tropism is the growth movement of a plant in response to the external stimulus in which the direction of the response depends on the direction of the stimulus.
Auxin is a plant hormone which is synthesised at the tips of roots and shoots. It helps in the elongation of cells. When a tendril comes in contact with a support, the auxins stimulate the elongation of the cells on the opposite side of the stimulus, which results in the coiling of the tendrils around the support. Q.21. List the important products of the chlor-alkali process. Write one important use of each.    [3]

How is washing soda prepared from sodium carbonate? Give its chemical equation. State the type of this salt. Name the type of hardness of water which can be removed by it.    [3]
Ans. When electricity is passed through an aqueous solution of sodium chloride (brine), it decomposes to form sodium hydroxide and chlorine and hydrogen gas is liberated.
Sodium hydroxide is used

Washing soda is prepared from sodium carbonate by recrystallisation.

Q.22. 1 g of copper powder was taken in a China dish and heated. What change takes place on heating? When hydrogen gas is passed over this heated substance, a visible change is seen in it. Give the chemical equations of the reactions, the name and the colour of the products formed in each case.      [3]
Ans. When copper powder taken in a China dish is heated, it reacts with oxygen in the air and forms copper oxide which forms a black layer on the surface.
When hydrogen gas is passed over the copper oxide layer on the surface, it reacts with hydrogen to form elemental copper and water is formed.

Q.25. Draw a ray diagram in each of the following cases to show the formation of the image when the object is placed
(i) Between the optical centre and the principal focus of a convex lens
(ii) Anywhere in front of a concave lens
(iii) At 2F of a convex lens State the signs and values of magnifications in the above mentioned cases i and ii.        [5]

An object 4.0 cm in size is placed 25.0 cm in front of a concave mirror of focal length 15.0 cm.
(i) At what distance from the mirror should a screen be placed in order to obtain a sharp image?
(ii) Find the size of the image.
(iii) Draw a ray diagram to show the formation of the image in this case.      [5]
Ans. Ray diagrams:
(i) Between the optical centre and the principal focus of a convex lens (ii) Anywhere in front of a concave lens 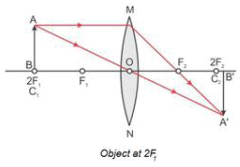 negative sign indicate that image is formed at the same side as that of an object.
(ii) Q.26. (a) What is the law of dominance of traits? Explain with an example.
(b) Why are traits acquired during the lifetime of an individual not inherited? Explain?     [5]
Ans.
(a) Law of Dominance: According to this law, characters are controlled by discrete units called factors which occur in pairs, with one member of the pair dominating over the other in a dissimilar pair. This law explains the expression of only one of the parental characters in the F1 generation and the expression of both parental characters in the F2 generation.

For example: a tall pea plant can be crossed with a dwarf pea plant in the following manner: 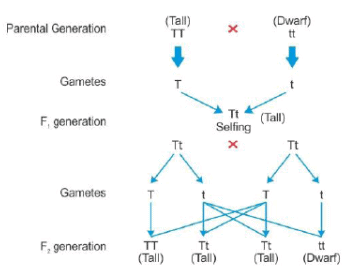 (b) Traits or characteristics which develop in response to the environment and cannot be inherited are called acquired traits. These traits cannot be inherited because there is no change in genes or DNA involved. Only those variations are inherited which come into the germ cell of the organism.

Q.27. (a) A gas is released during photosynthesis. Name the gas and also state the way by which the gas is evolved.
(b) What are stomata? What governs the opening and closing of stomata?    [5]

(a) Draw a diagram of the human alimentary canal and label the gall bladder, pancreas, liver and small intestine on it.
(b) Give two reasons to explain why absorption of digested food occurs mainly in the small intestine.       [5]
Ans. (a) Oxygen gas (O2) is released during photosynthesis.
During photosynthesis, plants absorb carbon dioxide and sunlight to produce carbohydrates. Solar energy trapped by chlorophyll breaks down the water molecule by the process of photolysis during which oxygen is released. This released oxygen is emitted in the atmosphere.
(b) Stomata are tiny pores present on the surface of leaves which help in gaseous exchange and transpiration. Q.29. The position of certain elements in the modern periodic table are shown below.

Define atomic size. Give its unit of measurement. In the modern periodic table, what trend is observed in the atomic radius in a group and a period, and why is it so?         [5]
Ans.
(i) Element E will form only a covalent compound.
(ii) Element B is a non-metal with valency 2.
(iii) Element D is a metal with valency 2.
(iv) Out of H, C and F, element F has the largest atomic size.
(v) Elements H, C and F belong to the family of noble gases.

Atomic size is the distance between the centre of the nucleus and the outermost shell.
It is measured in Angstrom (Å).
In the modern periodic table, the atomic radius increases down the group.
This is due to the new shells being added as we go down the group. This increases the distance between the outermost shell and the nucleus.
Atomic size decreases on moving from left to right along the period. This is due to an increase in nuclear charge which tends to pull the electrons closer to the nucleus and reduces the size of the atom.