BASED ON VARIOUS PATTERN OF SITTING ARRANGEMENTS

ARE CLASSIFIED INTO1) Linear Arrangements2) Circular Arrangements3) Polygon ArrangementsHere we are limited to our topic linear and circular arrangements only. While making arrangements, it should be noted that all the conditions given are compiled with. These type of questions generally involve five to eight individuals arranged in a certain manner or pre-conditions. They may have to be arranged in a Circle or in a row accordingly.

Sometimes these questions are made more difficult by allowing an individual to a particular position with some conditions.General instructions to Solve Seating Arrangement Questions are as follows.1) First of all take a review on the given information. After performing this step, you would get an idea of the situation of people or objects.2) Next, determine the usefulness of each information’s and classify them accordingly into ‘definite information’, ‘comparative information’ and ‘negative information’.3) When the place of any objects or persons is definitely mentioned then we say that it is a definite information, X is sitting on the right end of the bench.4) When the place of any object or person is not mentioned definitely but mentioned only in the comparison of another person or object, then we say that it is a comparative information.Example 1: A is sitting second to the right of E. This type of information can be helpful when we can get the definite information about E.5) A part of definite information may consist of negative information. A negative information does not tell us anything definitely but it gives an idea to eliminate a possibility.Example 2: C is not sitting on the immediate left of A.TYPE-1 LINEAR ARRANGEMENTIn this type of arrangement, we arrange objects or persons in a line or row. The arrangement is done only on one ‘axis’ and hence, the position of persons or objects assumes importance in terms of order like positions. In this type of arrangement, we take directions according to our left and right.Steps to Solve the Linear Arrangements:(a) Identify the number of objects and their names.(b) Use pictorial method to represent the people or objects and their positions.(c) Arrange the information with relevant facts and their positions and try to find out the solution.(d) Answer the questions based on the arrangement having made.There are few words which must be paid adequate attention, i.e., ‘between’ means sandwiched, ‘immediate left’ is different from ‘to the left’. To understand it let us see some pictorial representation.When direction of face is not clear, then we take One Row Sequence(A) When direction of face is not clear, then we take based on diagram will be as follows:

Solution: According to the question the houses can be arranged as follows.

There E is standing in the middle.

In this arrangement, some persons are sitting around a circle and they are facing the centre. 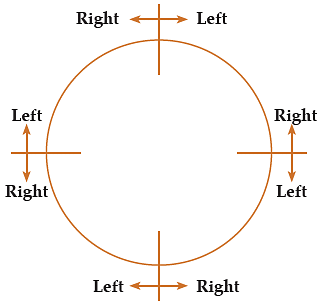 1. Left movement is called clockwise rotation.2. Right movement is called anti–clockwise rotation.(i) The above presentation is for 4 persons but for any number of persons, the direction is taken in the same manner.(ii) For rectangular and sequence arrangement, directions are taken as discussed in two rows sequence.Example 9: (Q Nos. 1 to 3) Study the following Question carefully and answer the given questions. Four ladies & A, B, C and D and Four Gentlemen E, F, G and H are sitting in a circle around a table facing each other .I. No two ladies or gentlemen are sitting side by side.II. C, who I sitting between G and E, is facing D.III. F is between D and A and facing G.IV. H is to the right of B.(1) Who is sitting left of A?(a) E(b) F(c) G(d) H(2) E is facing whom?

(3) Who is immediate neighbour of B?(a) G and H(b) E and F(c) E and H(d) F and HSolution: On the basis of given information in the question, the seating arrangements of the persons are as follows. 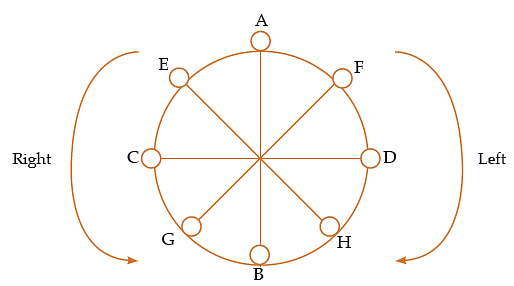 1) (b) Clearly , F is sitting left of A.2) (d) Clearly E is facing H.3) (a) G and H are neighbours of B.Example 10: Eight persons A, B, C, D, E, F, G and H are sitting around the circle as given in the figure. They are facing the direction opposite to centre. If they move upto three places anti-clockwise, then 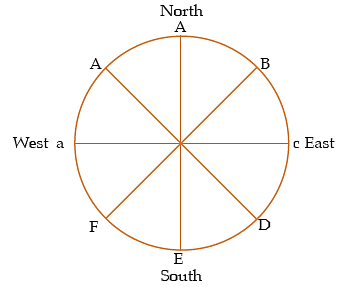 (a) B will face west(b) E will face East(c) H will face North-West(d) A will face SouthSolution: Following Seating arrangement is formed from the given in formation 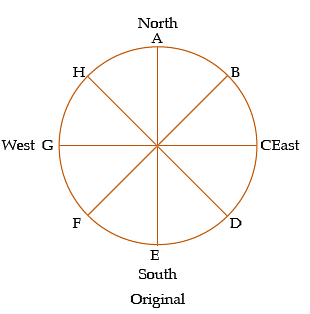 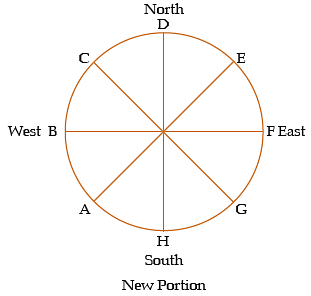 Clearly B will Face westExample 11: Five People A, B, C, D and E are seated about a round table. Every chair is spaced equidistant from adjacent chairs. (UPSC (CSAT) 2013)I. C is seated next to A .II. A is seated two seats from D.III. B is not seated next to A.Which of the following must be true?I. D is seated next to B.II. E is seated next to A.Select the correct from the options given below:(a) Only I(b) Only II(c) Both I and II(d) Neither I nor IISolution:According to the given information there are possible Seating arrangements. 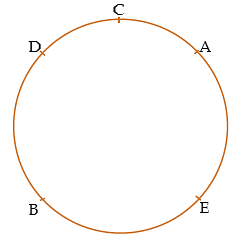 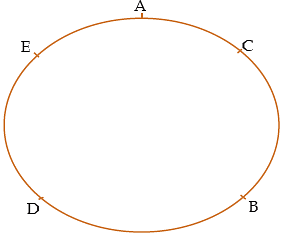 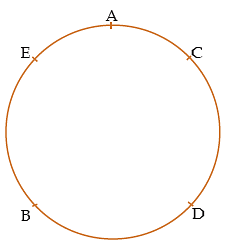 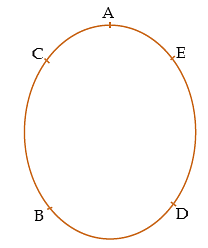 From the above arrangements. It is clear that D is seated next to B . Also E is next to A. 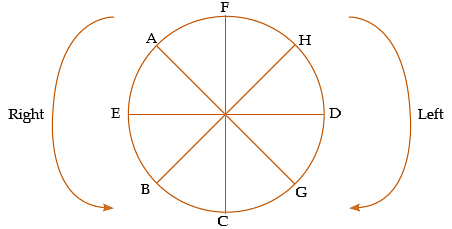 So, CB does not belong to the group.

3) (d) Clearly, H is sitting exactly between F and D