Second Order ProcessA second order process is a process whose output is modeled by a second order differential equation.

where, u(t) and y(t) are input and output of the process respectively. If

, then define the following:

, the equation can be re-written as

are respectively the deviation forms of the output and input of the process around the steady state, whose initial conditions are assumed to be the following:

Taking Laplace Transform of the eq. (70) we obtain,

Kp is called the gain of the process.

Example of a second order process 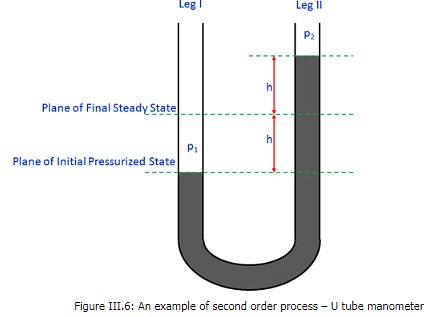 Applying force balance on both the legs of the manometer across plane of initial pressurized state, we obtain:

is the Reynold's number. Hence the force balance equation takes the form:

The velocity of manometer liquid is rate of change of h . Hence,

For a step input of magnitude A , the Laplace Transform of u(t) would be,

The process response will grossly depend upon the value of ξ and there can be three distinguished cases of ξ, i.e. ξ >1; ξ = 1 and ξ <1 .

In this case the process response equation in the Laplace domain takes the following form:

For ξ ≠ 1, using the following:

In the above equations, the following trigonometric identities have been used:

Hence we get the final expression for process response when ξ >1,

In the above equations, the following trigonometric identities have been used:

One can also use the following trigonometric identity for the above expression:

Hence we get the final expression for process response for ξ < 1,

he frequency of oscillation is

whereas the phase lag is