SECTORS OF THE INDIAN ECONOMY 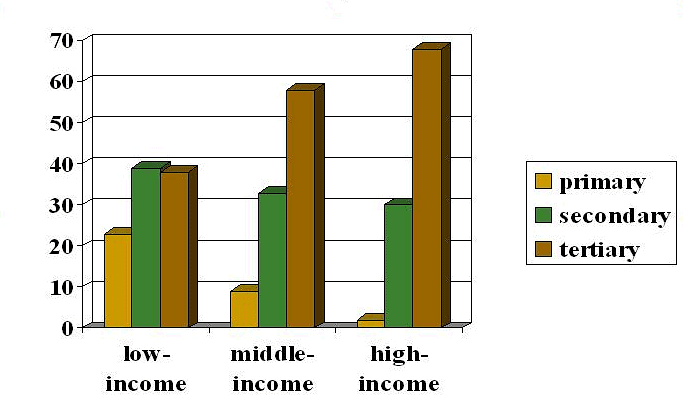 Secondary SectorWhen the main activity involves manufacturing then it is the secondary sector. All industrial production where physical goods are produced come under the secondary sector.
Tertiary SectorWhen the activity involves providing intangible goods like services then this is part of the tertiary sector. Financial services, management consultancy, telephony and IT are good examples of service sector.

Evolution of an Economy from Primary Sector Based to Tertiary Sector:

During early civilization all economic activity was in primary sector. When the food production became surplus people’s need for other products increased. This led to the development of secondary sector. The growth of secondary sector spread its influence during industrial revolution in nineteenth century.

Interdependence of Sectors:To understand this interdependence, let us take an example of a cold drink. A cold drink contains water, sugar and artificial flavor. Suppose if there is no sugarcane production then procuring sugar will become difficult and costly for the cold drink manufacturer. Now to transport sugarcane to sugar mills and sugar to the cold drink plant needs the services of a transporter. A person or system of persons is required to maintain and monitor all these movement of goods from farm to factory to shop in different locations. That is where role of administrative staffs comes. Let us go back to the farmer. He also needs fertilizers and seeds which is processed in some factory and which will be delivered to his doorstep by some means of transportation. To top it all at every step of these activities we require the proper monetary and banking system. So, in a nutshell this describes how interrelated all sectors of an economy are.

Growth and Status of Different Sectors in India 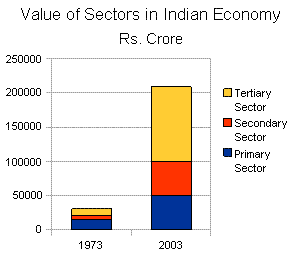 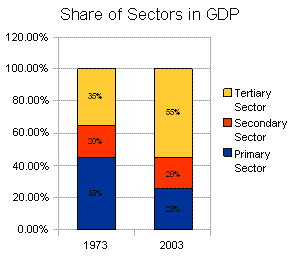 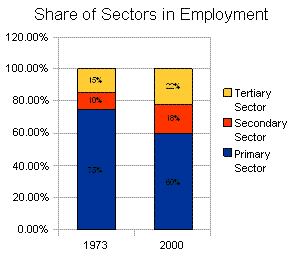 The first graph shows a massive increase in turnover for all these sectors during 20 years, which shows the way our economy grew. The second graph shows that share of agriculture decreased substantially and that of industry remained static and share of services grew. Particularly the growth of share of services sector was phenomenal from 35% to 55%.

Now the third graph paints a distressing picture. The share in providing employment was not in tune with the share in GDP. The agriculture provided employment to 75% workers and this decreased to 60% in 2000, which is not as big a drop as agriculture’s drop in GDP contribution. On the other hand the growth in employment provided by other two sectors was substantially low.

The meaning of this finding is as follows:-
1. Majority of people are still employed in agricultural activities. As agriculture provides seasonal employment during cropping season so chances of hidden employment are big. Moreover, as history suggests a developed nation’s dependency shifts from primary sector towards tertiary sector in all aspects of economic development, so it can be said that India is still way behind because majority still depend on agriculture.
2. Secondary and Tertiary Sector have failed to generate enough employment opportunities making a pressure on primary sector. Although educated and skilled workforce do get employed in secondary and tertiary sector but for unskilled and semi-skilled workers there is still shortage of employment avenues.

Other Classifications of Economy

Organised Sector:-
The sector which carries out all activity through a system and follows the law of the land is called organized sector. Moreover, labour rights are given due respect and wages are as per the norms of the country and those of the industry. Labour working organized sector get the benefit of social security net as framed by the Government. Certain benefits like provident fund, leave entitlement, medical benefits and insurance are provided to workers in the organized sector.

These security provisions are necessary to provide source of sustenance in case of disability or death of the main breadwinner of the family. Otherwise the dependents will face a bleak future.

Unorganized Sector:-
The sector which evade most of the laws and don’t follow the system come under unorganized sector. Small shopkeepers, some small scale manufacturing units keep all their attention on profit making and ignore their workers basic rights. Workers don’t get adequate salary and other benefits like leave, health benefits and insurance are beyond the imagination of people working in unorganized sectors. 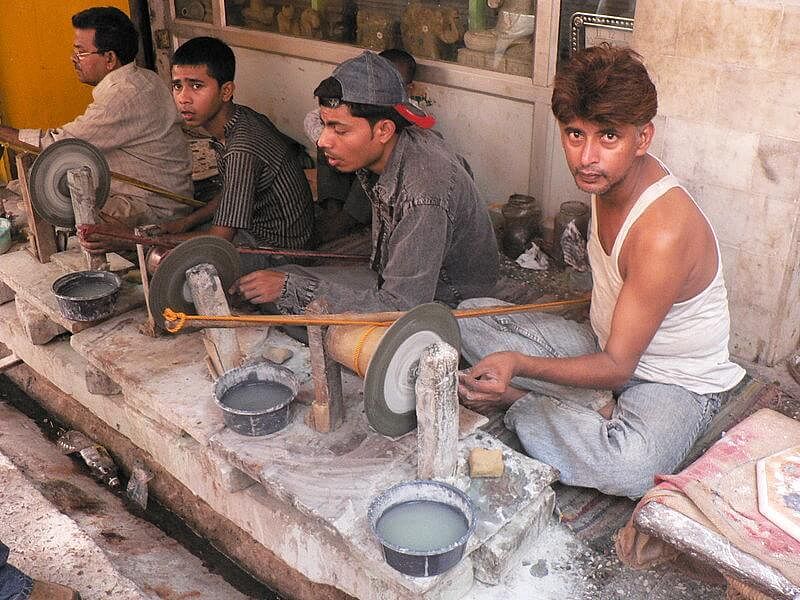 Fig: Labour at an unorganised handicraft manufacturing enterprise. Public Sector
Companies which are run and financed by the Government comprise the public sector. After independence India was a very poor country. India needed huge amount of money to set up manufacturing plants for basic items like iron and steel, aluminium, fertilizers and cements. Additionally infrastructure like roads, railways, ports and airports also require huge investment. In those days Indian entrepreneur was not cash rich so government had to start creating big public sector enterprises like SAIL (Steel Authority of India Limited), ONGC(Oil & Natural Gas Commission).

Private Sector
Companies which are run and financed by private people comprise the private sector. Companies like Hero Honda, Tata are from private sectors.

Government Aided Schemes to Fight Unemployment
Government, from time to time, announces and implements various employment scheme to fight unemployment or hidden employment to help the weaker section of society. Schemes like NREG (National Rural Employment Guarantee) is the latest announced by the UPA government in 2004. This program guarantees a minimum of 100 days of employment to at least one person from every rural household. This is part of government’s effort to ensure the ‘Right to Work’ to the rural poor citizen.