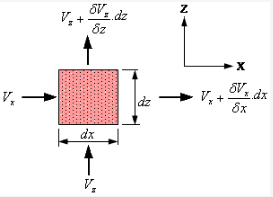 Similarly in the z-direction, the difference between the water inflow and outflow is

For a two-dimensional steady flow of pore water, any imbalance in flows into and out of an element in the z-direction must be compensated by a corresponding opposite imbalance in the x-direction. Combining the above, and dividing by dx.dy.dz , the continuity equation is expressed as

, where h is the head causing flow.

when the continuity equation is combined with Darcy's law, the equation for flow is expressed as:

For an isotropic material in which the permeability is the same in all directions (i.e. k x= k z), the flow equation is

This is the Laplace equation governing two-dimensional steady state flow. It can be solved graphically, analytically, numerically, or analogically.

For this, the Laplace Equation is

The values of constants can be determined from the specific boundary conditions. 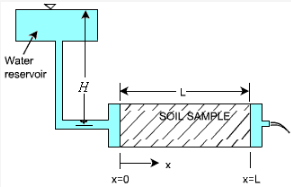 The specific solution for flow in the above permeameter is

which states that head is dissipated in a linearly uniform manner over the entire length of the permeameter.

Calculation of flow in a channel If standpipe piezometers were inserted into the ground with their tips on a single equipotential line, then the water would rise to the same level in each standpipe. The pore pressures would be different because of their different elevations.There can be no flow along an equipotential line as there is no hydraulic gradient.

Consider a field of length L within a flow channel. There is a fall of total head Dh. The average hydraulic gradient is

As the flow lines are b apart and considering unit length perpendicuar to field, the flow rate is

There is an advantage in sketching flow nets in the form of curvilinear 'squares' so that a circle can be insrcibed within each four-sided figure bounded by two equipotential lines and two flow lines.

In such a square, b = L , and the flow rate is obtained as Dq = k.Dh Thus the flow rate through such a flow channel is the permeability k multiplied by the uniform interval Dh between adjacent equipotential lines.

Calculation of total flowFor a complete problem, the flow net can be drawn with the overall head drop h divided into Nd so that Dh = h / Nd. If Nf is the no. of flow channels, then the total flow rate is