A Zener diode is a p-n junction operated in the reverse biased mode to take advantage of its sharply defined breakdown voltage. The Zener voltage VZ is specified at some test value of current IZT, at which the diode will exhibit some dynamic impedance

which depends upon the zener voltage of the diode and the level of Zener current.

Operation: A Zener diode may be used to regulate the load voltage at the value VZ by acting as a bypass value to counteract line voltage or load current variations. Diodes having a breakdown voltage below about 6V rely on the true Zener effect (high electric field moves electrons from bonds), while the avalanche effect is responsible for reverse current above 6 V. Zener diodes have a temperature coefficient, αZ which generally is negative for VZ below about 6 V but positive above 6V, and is expressed in per cent of VZ per °C, with the change in Zener voltage given by the equation. 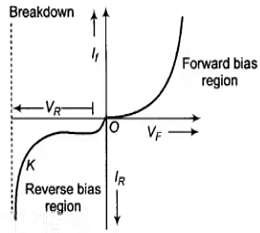 When Zener diode is forward biased, it works as a diode and drop across it is 0.7 V. When it works in breakdown region, the voltage across it is constant (VZ) and the current through diode is decided by the external resistance. Thus, Zener diode can be used as a voltage regulator in the configuration shown in figure.The load line of the circuit is given by: 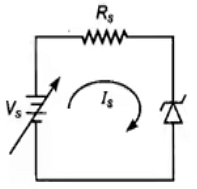 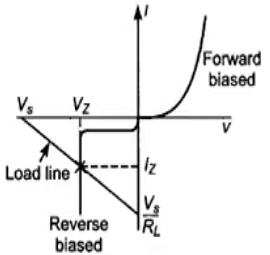 To operate the zener in breakdown region Vs should always be greater than VZ. Rs is used to limit the currentThe Zener on state resistance produces more IR drop as the current increases. As the voltage varies from V1 to V2 the operating point shifts from Q1 to Q2,The voltage at Q1 is V1= I1 RZ + VZand at Q2, V2 = I2 RZ + VZThus, change in voltage isV2 – V1 = (I2 – I1)RZ; ΔVZ = ΔIZRZ 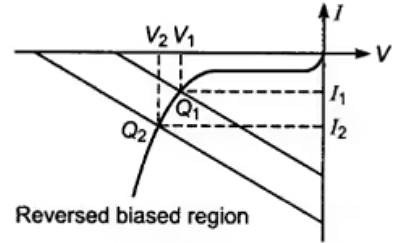 Modern solid state devices, which include emitters, sensors and collectors, usually are known as optical electronic devices or optoelectronics.

3. Indirect Bandgap Semiconductors: Indirect bandgap semiconductors, i.e., semiconductors for which the minimum of the conduction band does not occur at the same wave vector as the maximum of the valence band, are known to have a smaller absorption coefficient and are rarely used in light emitting devices. 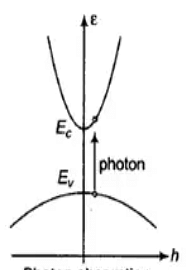 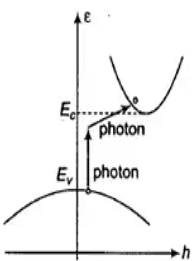 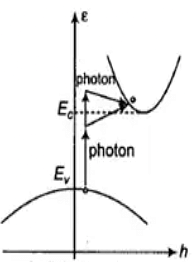 4. Photo-diode: The photo conductors which are junction type, are photo-diodes or photo transistors where in one or more p-n junction are used under reverse bias. Electron hole pairs resulting from photons incident on the p-n junction add to the minority carriers due to the reverse bias.

Symbol of Photo-diodeNote: Silicon and germanium photo sensors have their peak spectral response in the infrared region, with their response in the visible only approximately 40% of maximum.

Variations of the basic p-n photo-diode are

6. Light Emitting Diodes (LEDs): It is a special type of p-n junction device that under forward conditions can emit external spontaneous radiation in ultraviolet, visible and infrared regions of electromagnetic spectrum. Light Emitting Diodes may emit visible radiation when the p-n junction is diffused in GaAsP, infrared if constructed from GaAs, and a laser beam if sufficiently highly pulsed current is applied to a GaAs junction. A popular alphanumeric display is the LED seven segment device, which can provide high brightness for only a few milliwatts of input power per segment. 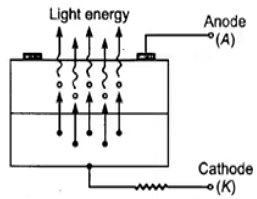 The solar cells are semiconductor junction devices which are used for converting optical radiation (sunlight) into electrical energy. The generated electric voltage is proportional to the intensity of incident light. Due to their capability of generating voltage they are called as photovoltaic cells. p-n junction solar cells are currently used to supply electrical power for many space satellites.When a photon of light energy collides with the valence electron either in p-type material or n-type material, it imparts sufficient energy to the electron to leave its parent atom. As a result, free electrons and holes are generated on each side of the junction. In p-type material, the newly generated electrons are minority carriers.