"Parallelism" means that all items or ideas in a sentence need to be in the same format. Unlike some of the other grammatical topics covered in this chapter, parallelism is a pretty intuitive concept to master; there are no exceptions to memorize, no strange rules to remember . Once you understand the concept, you're pretty much good to go. But why, if it's so simple, is parallelism included so often on the BANK EXAMS? For the same reason that misplaced modifiers, subject-verb agreement, and other "simple" topics are included: because test writers don't expect you to recognize it.

The concept of parallelism is easy to master - but recognizing a parallelism question is more difficult. This section will show you how to do both: it will begin with a more detailed explanation of what parallelism is, and what it dictates; the latter portion will list the different ways in which parallel constructions are commonly used on the BANK EXAMS. 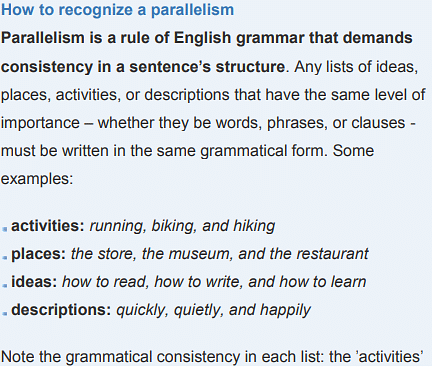 All elements in a list should be in similar form. "Similar form" means that all nouns, all infinitives, all gerunds, all prepositional phrases, or all clauses must agree. On the test, you'll often see lists of verbs, of which two agree, but one does not. In order for the sentence to be correct, all three verbs must agree:

Patty ate macaroons, drank soda and was dancing the tango.

The list of verbs in the incorrect sentence contains two singular simple past tense verbs ('ate' and 'drank') and one singular past progressive verb ('was dancing'). The verbs should all match:

The correct version changes the mismatched past progressive form to the simple past tense, like the other verbs in the list.

The verb "to program" must be changed to "programming," because the rest of the verbs are already in the -ing form.

You'll often see lists of infinitives on the BANK EXAMS: the "to ___" verbs (to walk, to talk, to eat, to chat, to drink…). With infinitives, a very simple rule applies: the word "to" must either go only before the first verb in the list, or before every verb in the list. For example:

Correct: He likes to swim, to sail, and to dance.

Correct: He likes to swim, sail, and dance.

Incorrect: He likes to swim, sail, and to dance. The first two sentences are equally acceptable variations. The third sentence is incorrect because it displays no consistency whatsoever; the verbs change from to swim to sail, and then back to to dance. This is in clear violation of the rules we've laid out.

The principle governing lists of infinitives applies, in fact, to any words that might come before each item in a series: prepositions (in, on, by, with), articles (the, a, an), helping verbs (had, has, would) and possessives (his, her, our). Either repeat the word before every element in a series or include it only before the first item. Anything else violates the rules of parallelism.

2. Lists of Adjectives or Adverbs

Just like verbs, adverbs or adjectives in a list must agree. Descriptive words are easy to replace with wordy phrases, and test writers will try to trip you up by including a verb or phrase among a list of adjectives or adverbs:

On the morning of his fourth birthday, Jonny was giggly, energetic, and couldn't wait for the party to begin.

If you read through it quickly, it might sound acceptable. However, the list includes one item that doesn't belong:

This looks to be a list of adjectives until you reach the third item in the list: it's not an adjective, it's a verb! The "list of adjectives" won't be complete until the last item falls into step with the others:

This example replaces the verb phrase "couldn't wait" with the descriptive phrase "very eager" — which indeed includes an adjective.

Incorrect: On the morning of his fourth birthday, Johnny was giggly, energetic and couldn't wait for the party to begin.

Correct: On the morning of his fourth birthday, Johnny was giggly, energetic and very eager for the party to begin.

Sometimes, you'll come across sentences with multiple pronouns. In many cases, parallelism requires that the pronouns be identical.

Incorrect: Those who exercise in addition to maintaining a healthy diet are likely to be in better health than the people who maintain a healthy diet but don't exercise.

Look at the sentence below:

If one decides to break the law, they must be willing to take responsibility for any repercussions

This sentence contains two pronouns. Do they match?

When using the word "one" as a pronoun referring to an unspecified person, the only acceptable match is "one": the first sentence inserts "they" instead, which is incorrect. The same rule applies for the pronoun "you" when it's used to refer to an unspecified person. The BANK EXAMS does not prefer one to the other, but "one" and "you" cannot be used interchangeably in the same sentence:

Incorrect: If one decides to break the law, you must be willing to take responsibility for any repercussions.

Correct: If one decides to break the law, one must be willing to take responsibility for any repercussions.

Correct: If you decide to break the law, you must be willing to take responsibility for any repercussions.

Both latter versions are correct.

Be consistent: use whichever pronoun you choose all the way through.