Pronouns stand in for nouns in a sentence. Pronouns follow the same agreement rules as nouns, so when using a pronoun, it is important to be clear about what noun it is replacing. The first step in tackling a pronoun question is to locate and identify any pronouns in the sentence. 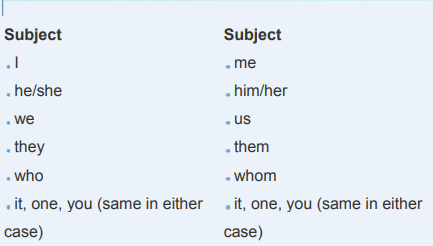 Once you've found a pronoun in a Sentence Correction question, check whether it's acting as the SUBJECT or the OBJECT of the sentence or phrase. Is following sentence correct or incorrect?

How could she blame you and he for the accident?

The first step is to identify the pronoun(s). There are three in this sentence: "she," "you," and "he":

Next, try to define whether each pronoun is acting as a subject or object. Here, "she" is the subject, and the pronouns "you" and "he" are acting as the objects of the sentence:

How do we know this? Because "she" is doing the action (blaming) and "you" and "he" are receiving it (getting blamed). However, "he" does not seem to be in the correct form. Refer to the chart above, or to the proper answer to the question "Who did she blame?", which is "him" not "he." ("Who did she blame? She blamed him.")

Both pronouns acting as objects must be in the objective case; as indicated in the graphic above, "him" is objective — while "he," used in the first sentence, is subjective, and therefore incorrect.

Incorrect: How could she blame you and he for the accident?

Correct: How could she blame you and him for the accident?

Let's look at another example:

Incorrect: Her was better suited for the job.

Correct: She was better suited for the job.

John and me drank a bottle of wine.

"Me drank a bottle of wine" sounds like caveman-speak, so the proper pronoun is clearly "I".

Incorrect: John and me drank a bottle of wine.

Correct: John and I drank a bottle of wine.

Let's try it again on the following sentence:

The dinner was eaten by John and I.

The second sentence is grammatically correct ("I/me" is acting as the object), so the proper pronoun is "me." This test works for many instances of misused pronouns, but to be safe, you should memorize the subject/object pronoun chart – just in case you can't figure out which version is right after you do the test.

Incorrect: The dinner was eaten by John and I .

Correct: The dinner was eaten by John and me

I don't know whom Kate married.

Why is "whom" correct? Because Kate is the subject of this sentence – not the person she married. To simplify who/whom questions, try rearranging the sentence into a question, and then answer it. Let's try it:

Here's another one to try:

Who took out the trash?

Because the sentence is already a question, you can't run the test as we did above. But not to worry: all you need to do is answer the question:

He took out the trash.

You wouldn't say "him took out the trash," so the pronoun in the original sentence must match the form of the pronoun "he," which is a subject pronoun: who is correct.

Pronouns also act like nouns in the realm of verb agreement. For some pronoun questions, you also need to check if the pronoun and its verb agree in number. 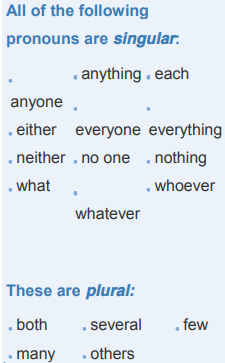 Incorrect: Everyone on the project have to come to the meeting.

Correct: Everyone on the project has to come to the meeting.

Referring to the chart above, you'll see that the pronoun "everyone" is singular. Its verb must therefore be singular as well: "has" is correct, not "have".

Incorrect: Neither his bodyguards nor he were there. ["Was" is correct!]

Correct: Neither he nor his bodyguards were there.

Incorrect: Some of you will have to bring their own beer.

Correct: Some of you will have to bring your own beer.

"Some of them will have to bring…"

Incorrect: If anyone comes over, take their name.

Correct: If anyone comes over, take his or her name.

The subject is anyone, which is singular, and which therefore requires a singular pronoun such as "his" or "her". This error has become common because of the demand for political correctness; instead of saying "his or her", people will often just say "their." Either "his" or "her" alone is technically correct, but writing "his or her," as in this example, is also acceptable.

5. "Objects" of to be verbs are in the subject form

Incorrect: It must have been her who called.

Correct: It must have been she who called.

Which, that and who are relative pronouns. A relative pronoun must refer to the word immediately preceding it. If the meaning of the sentence is unclear, the pronoun is in the wrong position. Which introduces non-essential clauses; that introduces essential clauses. Who refers to individuals; that refers to a group of persons, class, type, or species.

Incorrect: John was met at the door by a strange man, which he, being afraid, opened slowly.

Did John open "the man?" Probably not. This sentence is definitely confusing, but its meaning can be clarified by adjusting the placement of the nouns in the sentence.

Correct: John was met by a strange man at the door, which he opened slowly out of fear.

It's now clear what John is opening, and why.

On the BANK EXAMS, the pronouns "one" and "you," which are included in a class of pronouns called "impersonal pronouns," are often improperly matched with their respective possessive pronouns. You might have heard that using "you" is less proper than using "one," but on the BANK EXAMS, all that matters is that the pronouns agree – there's no word-choice preference one way or the other. Look at these examples:

Incorrect: One should have their teeth checked every six months.

Correct: One should have one's teeth checked every six months.

Correct: One should have his or her teeth checked every six months.

Correct: You should have your teeth checked every six months.

Incorrect: One should take your responsibilities seriously.

Correct: One should take his or her responsibilities seriously.

Correct: You should take your responsibilities seriously.

As long as "one" isn't paired with "your," or "you" with "one's," the sentence is probably correct.