A common error found in BANK EXAMS Sentence Correction questions is the misuse of verb tense. Verb tenses exist in order to allow us to specify at what point in time some event occurred – did it happen at one point in the past, or is it still happening? Is it happening now, or will it happen in the future?, etc. Because so many different tenses exist, BANK EXAMS questions are often extremely complicated, using several different tenses in a single sentence. The correct tense (or tenses) makes the sequence of actions clear.

Here's an example of a relatively simple verb tense error, and its correction:

Incorrect: After he had finished his performance, he would go to the party.

Correct: After he had finished his performance, he went to the party.

If the cyclist wins the race, it will be representing an extraordinary comeback from his earlier cancer.

To determine whether this sentence is correct, let's break it down into its constituent parts:

The "if clause" at the beginning of the sentence indicates a hypothetical: a sentence written in if...then... form. This kind of sentence requires that the dependent event be in the simple future tense: meaning that the event, if it happens, will happen once, at some time in the future, following the first event's occurrence. It will not keep happening. Here, however, the dependent event is in the future continuous, not the simple future.

Incorrect: If the cyclist wins the race, it will be representing an extraordinary comeback from his earlier cancer.

Correct: If the cyclist wins the race, it will represent an extraordinary comeback from his earlier cancer.

Why is the second sentence correct? Because a positive outcome of the race, which is as yet undetermined, is only going to "represent his comeback" once – as soon as it happens. The first sentence implies that the cyclist's victory is going to keep representing a comeback for the duration of his victory – which is confusing, and doesn't make much sense.

English verb tense is - clearly - an extraordinarily complex subject. To make your efforts a bit simpler, keep a few general rules in mind: first, to help determine whether the verbs in a sentence are in the proper tenses, pick one event as a "base" action, and then try to figure out when other events occurred in relation to that event. Try to discern whether the events occurred prior to the base action, orafter the base action; or at the same time as the base event took place. Keep in mind that actions that start before the base may continue after the base.

Ask yourself: "What happened first, second? What makes sense logically?"

This is only half of the process however: after you determine when the events took place, you still need to know what verb formcorresponds to the time sequence you've identified. This requires a working knowledge of verb tense, as well as mood and voice - it's very important to study them. A verb tense, mood, and voice guide is included in the extras section; it is recommended that you take a look at it, even if you already feel comfortable working with verbs. 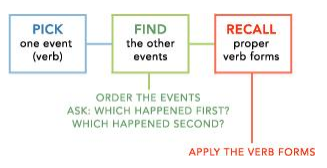