Separating Components of a Mixture - Is Matter Around Us Pure, Class 9, Science Class 9 Notes | EduRev

Class 9 : Separating Components of a Mixture - Is Matter Around Us Pure, Class 9, Science Class 9 Notes | EduRev

The document Separating Components of a Mixture - Is Matter Around Us Pure, Class 9, Science Class 9 Notes | EduRev is a part of Class 9 category.
All you need of Class 9 at this link: Class 9

Separating the components of a mixture :

Many of the material around us are mixtures, these mixtures have two or more than two constituents mixed in them. It may not be possible to use a mixture as such in homes and in industries. We may require only one or two separate constituents of a mixture for our use. So, we have to separate the various mixtures into their individual constituents to make them useful in our daily life.

The various constituents of a mixture have different physical properties such as density, solubility, size of particles volatility, boiling points, etc.

Heterogeneous mixtures can be separated into their respective components by simple physical methods such as hand picking, sieving, filtration etc. in everyday life. However, for separating homogeneous mixtures special techniques are employed depending upon the difference in one or more.

`Separation of coloured components (Dye) from Blue or Black ink :

The blue ink (or black ink) used in fountain pens is a liquid mixture. It is a mixture of a 'dye' in water. We can separate the 'coloured component (dye) by the process of evaporation. In process of separation, we do not heat the china dish containing ink directly over the flame.This is because the 'dye' obtained from ink can get decomposed by the high temperature produced by the direct heating with a burner. We use a 'water bath' for evaporating ink.

We take a beaker and fill it half with water (as a water bath). About 5ml of ink (Blue ink or black ink) is put in a china dish. The china dish containing ink is then placed over the mouth of the beaker containing water, which is kept on a tripod stand.

We now start heating the beaker with a burner, soon the water in beaker starts boiling to form steam, this steam heats the ink in the china dish. Due to this heating, the water present in ink starts evaporating gradually. When all the water has evaporated from the ink. we stop heating. We will find that a small amount of a solid coloured material is left in the china dish. Thus we can separate the volatile component (Solvent) from its non-volatile solute by the method of evaporation.

Separation of Cream from milk :

Sometimes the solid particles in a liquid are very small and pass through a filter paper. for such particles, the filtration technique cannot be used for separation. Such mixtures are separated by centrifugation.

The method of separating finely suspended particles in a liquid, by whirling the liquid at a very high speed is called centrifugation.

Principal of centrifugation: It is based on that when a very fine suspension or a colloidal solution is whirled rapidly, the heavier particles are forced towards the bottom of liquid and the lighter stay at the top.

Separation of a mixture of two immiscible liquids :

The separation of two immiscible liquids is based on the difference in their densities. The apparatus used for separation is separating funnel.

The mixture of two immiscible liquids is put in a separating funnel and allowed to stand for some time. The mixture separates into two layers according to the densities of the liquids in it. 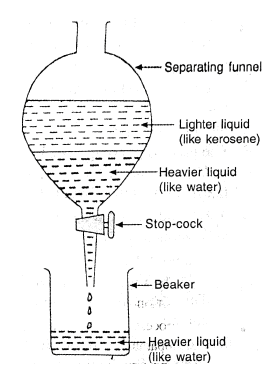 Separation of a mixture of common salt and Ammonium Chloride : 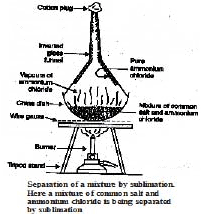 When the mixture gives off no more white fumes, lift the funnel, scrap the fine white powder from its sides on a piece of paper. This is pure ammonium chloride. The residue left behind in the funnel is sodium chloride. Some examples of solids which sublime are camphor, naphthalene and anthracene.

The process of separation of different dissolved constituents of a mixture by adsorbing them over an appropriate adsorbent material is called Chromatography. Kroma in Greek means colour. The adsorbent medium is generally magnesium oxide, alumina or filter paper.

There are many types of chromatography but the simplest form is the paper chromatography. This separation is based on the fact that the different constituents of a mixture get adsorbed differently on the same adsorbent material because they have different rates of movement. The rate of movement of each adsorbed material depends upon.

Separation of coloured constituents present in a mixture of ink and water.

The different coloured dyes present in black ink can be separated by performing a paper chromatography. 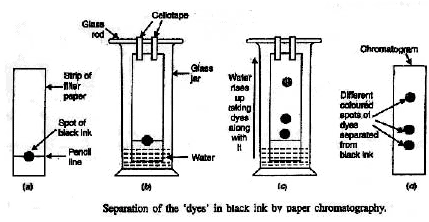 3. Drugs from the blood.

Separation of a mixture of two miscible liquids : 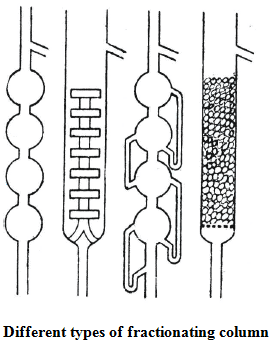 To separate a mixture of two or more miscible liquids for which the difference in boiling points is less than 25K, fractional distillation process is used.

A simple fractionating column is a long vertical glass tube filled with glass beads. The glass beads provide a large surface area for hot vapours to cool and condense respectively.

Separate a mixture of Ethyl alcohol and water 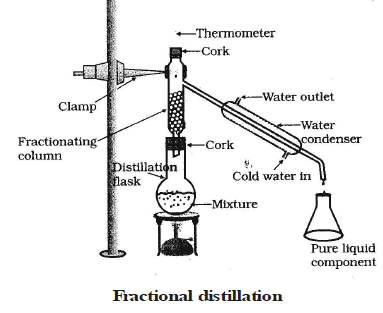 Separation of the Gases of the air :

All these gases are obtained from the air on a large scale. This is because air is the cheapest source of these gases.

Air is a homogeneous mixture and can be separated into its components by fractional distillation of liquid air.

Separation of pure copper sulphate from an impure sample :

The process involved in obtaining pure copper sulphate from its impure sample is crystallisation.

The process of cooling a hot, concentrated solution of a substance to obtain crystals is called crystallisation. Crystallisation is a process that separates a pure solid in the form of its crystals from a solution.

1. Purification of salt that we get from sea water

2. Separation of crystals of alum (phitkari) from impure samples.

Supply of drinking water in a city :

In cities, drinking water is supplied from water works. In water works, the methods like sedimentation, decantation, loading, filtration and chlorination etc are used to remove undesirable materials from water. The source of water supply in a city is either a nearby river or a lake called reservoir. The river water and lake water usually contain suspended solid substances and some germs, so, before this water can be supplied to homes, it must be purified to remove suspended impurities as well as germs.

The purification of river water or lake water is done in the following steps.

(2) Filtration: The semi-clear water is allowed to pass through beds of sand, charcoal and gravel to remove suspended impurities.

(3) Removal of harmful - organism or sterilisation: The harmful bacteria in filtered water can cause very serious diseases such as typhoid, cholera etc. Thus, to the filtered water bleaching powder or chlorine gas is added. This kills the microorganisms and hence the water becomes fit for drinking. This water is directly pumped into overhead tanks for supply to a city.