The document Series Reaction - Chemical Kinetics Chemistry Notes | EduRev is a part of the Chemistry Course Physical Chemistry.
All you need of Chemistry at this link: Chemistry

In this, the reactant A decays to four intermediate I, and this intermediate undergoes subsequent decay resulting in the formation of product P. The above series is elementary first order reaction.Then the rate law expression is :

then the rate law expression is

This differential equation has a standard form and after setting

The expression for [P] is

The rate of formation of product can be determined by slowest step.

The graph representation for case I i.e. when kA >> kI. 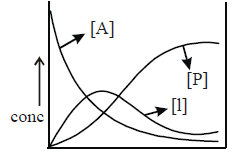 The graph representation of case II i.e. when kA >> kI assuming that only reactant A is present at t = 0, what is the expected time dependence of [P] using the steady state approximation ? Sol. The differential rate expression for this reaction are:

Applying the steady state for I we get

This is expression for [P].

for the following given equation.

Problem.  Using steady state approximation, derive the rate law for the decomposition of

On the basis of following mechanism.

Sol. The intermediate are NO & NO3. The rate law are: