SHAPES AND HYBRIDISATION OF MOLECULES

MOLECULAR ORBITALTHEORYAs in the case of atomic orbitals, Schrodinger equations can be written for electrons in molecules. Approximate solutions to these molecular Schrodinger equations can be constructed from linear combinations of the atomic orbitals (LCAO), the sums and differences of the atomic wave functions.For diatomic molecules such as H2, such wave functions have the form

where ψ is the molecular wave function, ψa and ψb are atomic wave functions, and ca and cb are adjustable coefficients. The coefficients can be equal or unequal, positive or negative, depending on the individual orbitals and their energies.

Molecular Orbitals From s-Orbitals: Consider first the combination of two s orbitals, as in H2. For convenience, we label the atoms of a diatomic molecule a and b, so the atomic orbital wave functions are ψ(1sa) and ψ(1sb).

We can visualize the two atoms moving closer to each other until the electron clouds overlap and merge into larger molecular electron clouds. The resulting molecular orbitals are linear combinations of the atomic orbitals, the sum of the two orbitals and the difference between them. 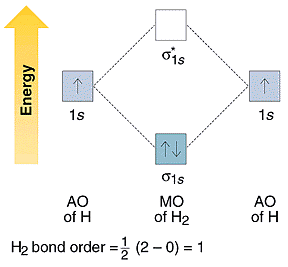 Molecular Orbitals from p-Orbitals: The algebraic sign of the wave function must be included when interactions between the orbitals are considered. When two orbitals overlap and the overlapping regions have the same sign, the sum of the two orbitals has an increased electron probability in the overlap region.

When two regions of opposite sign overlap, the combination has a decreased electron probability in the overlap region. For convenience, we will choose a common z-axis connecting the nuclei. pz orbitals subtract to form s and add to form σ* orbitals, both of which are symmetric to rotation about the z axis and with nodes perpendicular to the line that connects the nuclei. Interactions between px and py orbitals lead to π and π* orbitals 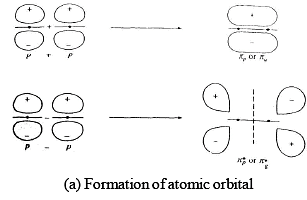 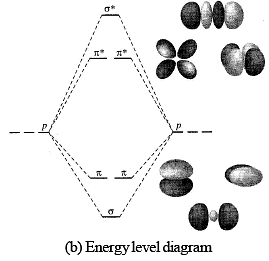 Molecular Orbitals From d-Orbitals: When the z-axis are collinear, two dz2 orbitals can combine end on for s bonding. The dxz and dyz orbitals form p orbitals. When atomic orbital meet from two parallel planes and combine side to side, as do the dx2-y2 and dxy orbitals with collinear z axis, they form δ (delta) orbitals.

Nonbonding Orbitals and Other Factors: There can also be nonbonding molecular orbitals, whose energy is essential that of the original atomic orbitals. These can form when there are three atomic orbitals of the same symmetry and similar energies, a situation that requires the formation of three molecular orbitals. One is a low-energy bonding orbital, one is a high-energy antibonding orbital, and one is of intermediate energy and is a nonbonding orbital.Sometimes, atomic orbitals whose symmetries do not match and therefore remain unchanged in the molecule are also called nonbonding. For example, the s and dyz orbitals of the preceding example are nonbonding with respect to each other.