Shear Failures, Shear Transfer, and Shear Design» Structural behavioro Structural members are subjected to shear forces, generally, in combination with flexure, axial force, and sometimes with torsion.o Shear failures are brittle failures primarily because shear resistance in R/C relies on tensile as well as the compressive strength of concrete. Although cracking introduces complications it is still convenient to use classical concepts in analyzing concrete beams under shear failure. Such concepts indicate that shear failure is related to diagonal tensile behavior in concrete. R/C beam must be safe against premature failure due to diagonal tension.»Failure modes due to shear in beamso Diagonal tension failure – suddeno Shear-compression failure – gradualo Shear-bond failure→ In general, the design for shear is based on consideration of diagonal (inclined) tension failure.» Failure of R/C by inclined crackingo Inclined cracking load

leading to dependence on the ratio of

where f'c= compressive strength of the concrete, in psi,

= longitudinal tensile steel ratio,bw = the effective width of the beam, in inchesMu = total bending moment of the beam,

in lbs-in,d = the effective depth of the beam, in inches, ands = spacing of stirrups, in inches.An alternative simpler equation is

o The required shear strength to be provided by the steel (vertical web reinforcement):

where fy = yield strength of the steel and           s = spacing of stirrups. When stirrups with inclination θ are used, the contribution of steel to shear strength becomes:

» Contribution of axial forces» Minimum web reinforcement» Shear transfero Shear in concrete can cause inclined cracking across a member. It is also possible that shear stresses may cause a sliding type of failure along a well-defined plane. Because of previous load history, external tension, shrinkage, etc., a crack may have formed along such a plane even before shear is applied. Upon application of shear forces we have the problem of quantifying shear stress transferred across the cracked sections.o General shear transfer mechanisms are1. Through still uncracked concrete2. Direct thrust3. Dowel action4. Aggregate interlock→ Reinforcement provides clamping action.1. Transfer of shear through intact concrete such as the compression region in a beam2. Direct thrusto Models of shear transfer:1. Arch analogy: Beam example2. Truss analogy (strut-and-tie action): Corbel example→ Failure mechanisms of corbels:Flexural-tension failureDiagonal splitting failureDiagonal cracks and shear force failureSplitting along flexural reinforcement failureLocal cracking at supportLocal splitting due to cracking3. Dowel actiono Three mechanisms of dowel action: 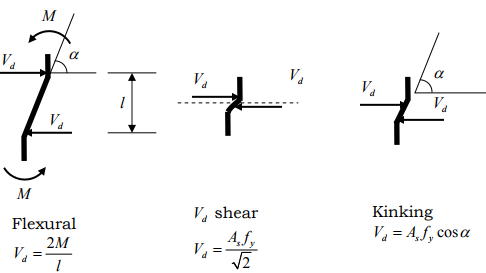 → Shear transfer through dowel action is approximately 25~30% of the shear resisted by the interface shear mechanism.→ Note that the shear yield stress may be determined from von Mises yield function: o Assume that the movement of Block A is restraint. Upon application of V Block B moves downward and tends to go to rightopening of crack. Crack plane is in compression. Dowel is in tension.o Shear force due to simple friction and dowel 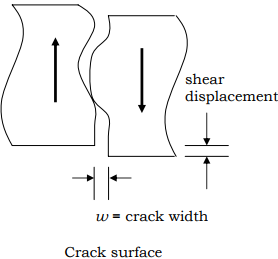 — Calculation of the deflection due to shear-slip— Equilibrium + Compatibility + Deformation

where h = distance between two cracks,