The document Short & Long Answer Question, Chapter 7 - Control & Coordination, Science, Class 10 Class 10 Notes | EduRev is a part of the Class 10 Course Science Class 10.
All you need of Class 10 at this link: Class 10

A neuron is a nerve cell that is the basic building block of the nervous system. Neurons are similar to other cells in the human body in a number of ways, but there is one key difference between neurons and other cells. Neurons are specialized to transmit information throughout the body.These highly specialized nerve cells are responsible for communicating information in both chemical and electrical forms. There are also several different types of neurons responsible for different tasks in the human body.

The two types of tropism are phototropism and geotropism.

Phytohormones are chemical substances, which are produced naturally in plants and are capable of translocation and regulating one or more physiological reactions when present in appropriate concentrations. The two phytohormones are auxins and gibberellins.

Q4. Mention the receptors for light and sound in animals.

Q5. How do control and coordination take place in plants?

Plants have a unique mechanism of controlling and coordinating its various physiological and biological processes. Plants respond to light, touch, gravitational force and other stimuli. Growth and movements in plants are regulated by both external and internal factors. The functions of control and coordination in plants are performed by chemical substances known as plant hormones or phytohormones.(i) Coke on heating in air, catches fire and liberates large amount of heat.

The movement of plants toward light is called phototropism.

Q9. Draw the diagram of a neuron. Q10. Draw a neat diagram of the nervous system in an insect. 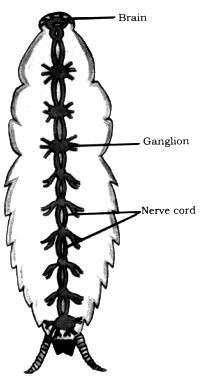 Brain is the highest coordinating centre in the body. It is protected by a bony box in the skull called the cranium. Brain is covered by three membranes, called meninges. The space between the membranes is filled by cerebrospinal fluid that protects the brain from mechanical shocks.The brain is broadly divided into three regions:(i) Forebrain (ii) Mid-brain(iii) Hind-brain.Each region of the brain consists of various centers. The fore brain includes cerebrum and olfactory lobes.The cerebrum is the most complex and specialized part of the brain. It consists of two cerebral hemispheres.The cerebrum has sensory areas where information is received from sense organs. Similarly, there is the motor area from where impulses are sent to the muscle or effectors organs. In the cerebrum, specific regions for each kind of stimulus and its response are located. Pairs of cranial nerves arise from the brain. The hind brain consists of three centers, cerebellum, pons and medulla oblongata. Medulla oblongata is the regulating centre for swallowing, coughing, sneezing and vomiting. The pons takes part in regulation of respiration. Coordination and the adjustment of movement and posture are under the control of cerebellum.Spinal cord is a part of the central nervous system, which lies in the vertebral canal. It is a downward continuation of the medulla oblongata. In the spinal cord, the arrangement of white and grey matter is reverse of that of the brain. The grey matter containing cytons is the inner region and white matter containing myelinated axons is the outer. In the centre of the spinal cord runs a small central canal. This central canal, which runs the entire length of the spinal cord, is continuous with the ventricles of the brain. The spinal cord in transverse section has H-shaped structure because it has fissures on the ventral and the dorsal sides. The dorsal fissure almost reaches the gray matter while the anterior median fissure falls short of it. Spinal cord gives off 31 pairs of nerves.

Q12. Write the functions of any one part of the hindbrain.

Cerebellum is the part of the hindbrain that controls and coordinates the movements of our body and helps in adjusting the posture. It functions even when the person is asleep.

Q13. What is the autonomic nervous system?

The autonomic nervous system controls the involuntary action of the body. It mainly controls and integrates the functions of internal organs like heart, blood vessels, glands, smooth muscles and uterus in the body. The autonomic nervous system is subdivided into (i) sympathetic and (ii) parasympathetic system. The organs receive nerves from both sympathetic and parasympathetic nerve fibers. They have antagonistic effects on the organs if one is stimulatory, the other is inhibitory.

When we suddenly withdraw our hands on pricking a pin, it is a reflex action. This type of sudden response to a stimulus is involuntary. A reflex action is defined as an unconscious and involuntary response of effectors to a stimulus. In reflex actions, a message from the receptors is relayed by sensory nerves to the spinal cord, which sends information for response via motor nerves to effectors. The pathway is called reflex arc. The simplest type of reflex action is knee-jerk reflex. In this case, while sitting with freely hanging legs, a strike below the knee cap kicks the leg forward. Other reflex actions are coughing, sneezing, yawning and blinking of eyes.

Q15. Name the hormones secreted by thyroid, parathyroid and pancreas.

Q18. Nervous and hormonal system together perform the function of control and coordination in human beings. Justify the statement.

In humans, the nervous system is the most important, rather essential, system for regulation, control and coordination of body functions. It makes possible a range of adaptive responses to changes in the environment in the interests of the individuals. This system helps the individual to respond in a coordinated manner to environmental changes, to control various movements and to prolong the life by protecting the body against harmful stimuli. Coordination in humans is brought about by the secretions of endocrine glands. Endocrine glands are the ductless glands, which secrete the chemical substances called hormones directly into the blood. Any chemical substance, which is formed in the tissues of endocrine glands and are carried by the blood to other parts of the body for its specific actions is termed as a hormone. An organ, which responds to such a hormone, is known as the target organ. Hence, hormones and nervous system together perform the function of control and coordination in the human beings.

Hydrotropism is a type of tropism, where the plant shows movement in response to water.

Q20. What is coordination?

The organ system cannot work independently. They are linked in one way or the other. Working together with all these systems is called coordination.

Q21. Why is the response of a plant to a stimulus not observed immediately?

The response of a plant to a stimulus not observed immediately because the plant shows its response very slowly.

Any chemical substance which is formed in the tissues of endocrine glands and is carried by the blood to other parts of the body for its specific actions is termed as hormone.

Q23. What are phytohormones?

A phytohormone can be defined as chemical substances, which are produced naturally in plants and are capable of translocation and regulating one or more physiological processes when present in low concentration.

Q24. What are meninges? What are their functions? Name the fluid, which is filled in between meninges.

The brain is surrounded by three membranes called meninges, which help to protect the brain. The space between the meninges is filled with cerebra spinal fluid, which protects the brain from mechanical shocks.

Q25. How do control and coordination occur in single-celled animals?

The cytoplasm of the single-celled animal controls and coordinates the activities of the organism.

Q26. Name any two phytohormones, which are growth promoters.

The two phytohormones, which are growth promoters are Auxins and Gibberellins.

Abscisic acid is a growth-inhibiting phytohormone.

Q28. What makes a stem bend towards sunlight?