The document Short & Long Answer Questions- Diversity in Living Organisms Class 9 Notes | EduRev is a part of the Class 9 Course Science Class 9.
All you need of Class 9 at this link: Class 9

Ques 2: Who proposed the classification of organisms into 5 kingdom?Ans: Robert Whittaker (1959).

Ques 3: Define species.Ans: All organisms that <are similar to breed and perpetuate.

Ques 6: What is lichen?Ans: The symbiotic association of fungi and blue-green algae, is called lichen.

Ques 7: What is symbiotic relationship?Ans: It is a relationship between two organisms in which both of them are benefitted, e.g., fungi gets food from blue-green algae and in return blue-green gets shelter [lichens]. 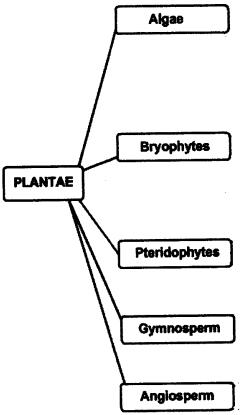 Ques 11: What are cryptogamae?Ans: The plants with inconspicuous reproductive organs are called cryptogamae, e.g., fern.

Ques 12: Give examples of pteridophyte.Ans: Marsilea and Fern.

Ques 14: What are gymnosperms?Ans: The group of plants that bear naked seeds e.g., pines, deodar.

Ques 15: What are angiosperms?Ans: The group of plants with covered seeds are called angiosperms. These are flowering plants.

Ques 16: What are cotyledons?Ans: Plant embryos in seeds have structures called cotyledons. Cotyledens are also known as seed leaves.

Ques 17: Name the phylum of an animals with pores on it.Ans: Porifera e.g., sponge.

Ques 18: Name the phylum of JellyfishAns: Coelenterata or Cnidaria.

Ques 19: What is the meaning of triploblastic?Ans: Animals which have three layers of cells from which differentiated tissues -can be made.

Ques 21: What is the meaning of “cold-blooded animal”?Ans: Those animals who show the variation in their body temperature according to the surroundings are called cold-blooded animals, e.g., fish, amphibians, reptiles.

Ques 24: Name a fish with skeleton made up of cartilage.Ans: Shark.

Ques 25: Name two fish which have skeleton made up of both bone and cartilage.Ans: Tuna and rohu.

Short Answer Type Questions
Ques 1: Give the characteristics of Monera.Ans:(a) Organisms are unicellular, do not have a defined nucleus.(b) Organisms may‘‘have cell wall or may not have cell wall.(c) Mode of nutrition is either autotrophic or heterotrophic.

Ques 2: Give the characteristics of Protista.Ans: (a) Organsims are unicellular and eukaryotic.(b) Use appendages for locomotion like cilia, flagella, etc.(c) Nutrition is either autotrophic or heterotrophic.(d) E.g., algae, protozoa.

Ques 4: What are hermaphrodites? Give two examples.Ans: When an organism has both the sexes, i.e., it can produce both sperms and eggs are called hermaphrodites. Example: Sponges, earthworms.

Ques 5: Give the difference between monocots and dicots.Ans:

Ques 6: Give the difference between two types of symmetry that animals show.Ans: Symmetry—Bilateral and Radial

Ques 7: Differentiate between vertebrates and invertebrates.Ans:

Ques 10: State the features of all chordates.Ans: All chrodates  possess the following features:
1. Have a notochord
2. Have a dorsal nerve chord
3. Are triploblastic
4. Have paired gill pouches

Ques 11: Give general characteristics of Porifera.Ans: (a) Animals with pores all over the body.(b) Body is not well differentiated.(c) Non-motile animals, remain attached to solid support.(d) Body is covered with hard outer skeleton.
Example: sponges.

Ques 13: Give general characteristics of ‘Platyhelminthes’?Ans: (a) These are flat worms.(b) Most of them are parasites.(c) Animals are triploblastic(d) No true internal body cavity.Example: Tapeworm, planaria, Liver fluke.

Ques 14: Give specific characteristics of Coelenterata.Ans: (a) Water living animals.(b) Body is made of two layers of cells.(c) Some of them live in colonies (corals), while others have solitary life-span {Hydra).(d) Body cavity present.

Ques 15: Give the characteristics of Arthropoda with 2 examples.Ans: (a) Arthropoda means jointed legs’.(b) Animals are bilaterally symmetrical and segmented.(c) It has an open circulatory system.(d) This is the largest group of animals.Example: Spider, scorpionts, crabs, house flies.

Ques 16: Give the characteristic features of Echinodermata.Ans: (a) Spikes present on skin.(b) Free living, marine animals.(c) Triploblastic and have a coelomic cavity.(d) Have a peculiar water driven tube system used for moving around.(e) Have hard calcium carbonate structure that is used as a skeleton.Example: Starfish, seaurchin.

Ques 17: Give the characteristics of mammals.Ans: (a) Mammals are warm-blooded animals.(b) Four-chambered heart.(c) Mammary glands for production of milk to nourish their younger one.(d) Skin has hairs, sweat glands and oil glands.(e) Most of them produce their young ones (viviparous).

Ques 19: Differentiate between algae and fungiAns:

Ques 21: Give the characteristibs of amphibians.Ans: Amphibians are vertebrates that lives on land and in water.(a) They are cold-blooded.(b) Heart is three-chambered.(c) Fertilization is external.(d) Respiration through lungs on land and through moist skin when in water.
Example: Frog, Toads

Ques 24: Give the hierarchy of 5 kingdom classification of living world.Ans: Long Answer Type QuestionsQues 1: What is the importance of classification?Ans: Classification is important because:(a) Classification makes the study of wide variety, of organisms, systematic and easier.(b) It projects a picture of all organisms and their interrelation with each other.(c) It provides a base for the study of other branches of biology.(d) It is useful in the study of ecology, which deals with; the inter-relation of an organism with their environment.(e) It helps to establish a hierarchy of groups of organisms.

Ques 2: What are the characteristic features of mammals?Ans: Characteristics features of mammals:(a) Body is covered with hair.(b) Skin is provided with sweat and sebaceous glands.(c) Heart is four-chambered.(d) Fertilization is internal.(e) Females have mammary glands to produce milk to nourish their young ones.(f) External ear—pinna, present.(g) Eyes have eye lids.(h) Warm-blooded.(i) Respiration through lungs,(j) Body cavity divided’ into- thorax and1 abdomen by muscular diaphragm.

Ques 4: What are the basis for classification of organisms?Ans: The basis for classification are:(a) Presence or absence of nucleus.(b) Organisms are unicellular, or multicellular.(c) Level of organisation.(d) Autotrophic mode of nutrition or heterotrophic mode of nutrition.(e) Of the organisms that perform photosynthesis (Plants), their level, or organisation of the body.(f) Of the animals, how does the individuals body develop and organise its different parts.

Ques 5: Give the characteristics of fiat worms, round worms and segmented worm. Give their phylum.Ans: 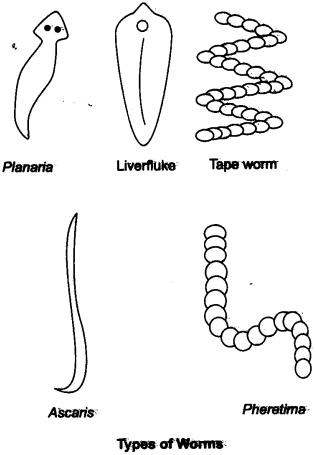 Ques 6: Give the classification of plant kingdom.Ans: Ques 8: Give the outline classification of animal kingdom.Ans: Activity Based QuestionsQues 1: 1. We have heard of ‘desi’ cows and Jersey cows.
2.Does a desi cow look like a Jersey cow?
3. Do all desi cows look alike.
4. Will we be able to identify a Jersey cow in a crowd of desi cows that don’t look like each other?
5. What is the basis of our identification?
Ans: 1.Desr cow is different in size’ and colour.
2. Most of the desi cows look alike, not all.
3.Yes, Jersey cow can be spotted’ from the group.
4. Basis of identification:
5. Size, horn shape, skin colour, height, etc.

Ques 2: • Soak seeds of green gram, wheat, maize, peas and tamarind Once they become tender, try to split the seed. Do all the seeds break into two nearly equal halves?
• The seeds that do are the dicot seeds and the seeds that don’t are then; monocot seeds.
• Now take a look at the roots, leaves and flowers of these plants.
• Are the roots, tap roots or fibrous?
• Do the leaves have parallel or reticulate venation?
• How many petals are found in the flowers of these plants?
• Can you write down further characteristics of monocots and dicots on the basis of these observations?
Ans:

Ques 3: Find out the. names of the following, animals and plants in as many: languages as you can.Ans: It is difficult to remember names of a species in different languages This problem means there was a need for some system to create unifhrm naming convention: Hence system of nomenclature and classification was devised

Value Based Questions
Ques 1: Many medicinal plants every year are getting extinct. A group of students who had gone for educational trip clicked photographs of endangered plants. These photograph were used by the school laboratory to study these plants.(a) Name two endangered plants.(b) Name any one medicinal plant and give its medicinal use.(c) What value of students is reflected in the above act?Ans:
(a) Two endangered plants are:
(i) Euphrasia
(ii) Ubnus rubra
(b) Aloe-vera. Juice of Aloe-vera is used in case of indigestion, treating dkin infection etc.(c) Students are caring citizens, shows responsible behaviour.