The document Short & Long Answer Question(Part- 1)- Sources of Energy Class 10 Notes | EduRev is a part of the Class 10 Course Science Class 10.
All you need of Class 10 at this link: Class 10 The heat absorbing property of black surfaces and the green house effect are utilised in making solar cookers. There are various types of solar cooker out of which, the box type solar cooker is one. The box of the solar cooker is made from non-conducting materials like plastics or fiberglass, with its inner walls painted in black. The walls of the box are made thick with a lining of non-conducting material to prevent loss of heat. Usually, a plane mirror is hinged on the top of the box. The mirror is adjusted in such a manner that it reflects sunlight into the box. The main purpose of the mirror is to increase the effective area for the collection of solar energy. The box is covered with a glass sheet that facilitates retention of heat inside due to green house effect. The temperature inside this type of solar cookers can go from 100 ºC to 140 ºC when they are kept in the sun for two to three hours. This type of cookers can be used to prepare food items that require slow heating, for example, for boiling rice, vegetables or dal. The solar cookers are provided with small containers with their outer surfaces painted in black. Two or three items could be prepared simultaneously by using these containers.Ques 4: Mention any two differences between a box type and a concentrator type solar heater.Ans: Box-type solar heater:In this type of heater, a plane reflector is used which does not concentrate solar energy at a point.It produces comparatively low temperature.Concentrator type solar heater:In this type of heater a concave reflector or a parabolic reflector is used which concentrates the solar energy in a small region called focus.It produces high temperature.Ques 5: Why is it not possible to make use of solar cells to meet all our energy needs? State atleast two reasons to support your answer.Ans: (i) The electricity generated by solar cells during the day is stored by using it to change storage batteries. These storage batteries give us direct current, but to operate the various devices, alternating current is required.(ii) The usage of solar cells becomes expensive, since the direct current given by the storage batteries has to be changed into alternating current using suitable appliances.Ques 6: Mention any four areas where solar cells are being used as a source of energy.Ans: Solar cells are used for street-lighting, for traffic signals, for operating water-pumps and for running radio and television sets in remote areas.Ques 7: Why can wind energy farms be established only at specific locations? Give reasons to support your answer.Ans: Wind energy farms can be established over a big area of land, where sufficient wind is blowing always, because electricity generated by a single wind turbine is quite small, so in order to generate a large amount of electricity, a large number of wind turbines are erected over a big area of land.Ques 8: It is difficult to use hydrogen as a source of energy, although its calorific value is quite high. Explain. Ans: (i) When hydrogen gas is lighted, it burns with an explosion which is very unsafe.(ii) It is very expensive to produce hydrogen gas by the electrolysis of water because it requires a lot of electricity.(iii) It is very difficult to store and transport hydrogen gas as it is explosively inflammable.Hence it is difficult to use hydrogen as a source of energy, though it has high calorific value.Ques 9: State the forms in which energy stored in the oceans manifests itself. Which one of these is utilized in OTEC systems?Ans: The energy from oceans is obtained in three forms:(i) Tidal energy(ii) Ocean waves energy and(iii) Ocean thermal energyOcean thermal energy is used in OTEC system.Ques 10: With the help of a diagram, explain the process of destructive distillation of wood.Ans: 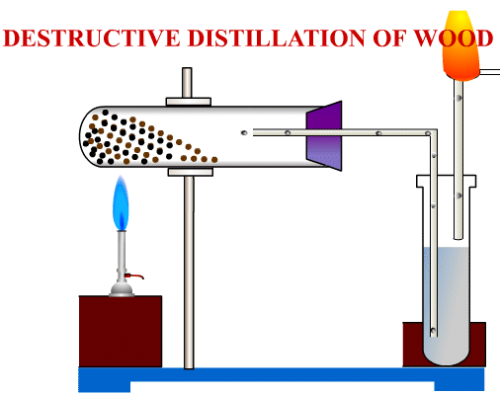