The document Short & Long Answer Question(Part-2) - Haloalkanes and Haloarenes Class 12 Notes | EduRev is a part of the JEE Course Chemistry for JEE.
All you need of JEE at this link: JEE

1-Bromopentane would react faster since it is a primary alkyl halide and moreover there is less steric hindrance experienced by the attacking nucleophile.

1-Bromo-2-methylbutane would react faster since it is a primary alkyl halide while the other is of tertiary nature.Q.52 Arrange the compounds CH3F,CH3I,CH3Br,CH3Cl in order of increasing reactivity in bimolecular nucleophilic substitution (SN2) reactions.

Answer: CH3F<CH3Cl<CH3Br<CH3I In these nucleophilic substitution reactions, the nucleophile is to displace the halide ion (X−). Greater the bond dissociation enthalpy of the C-X bond, difficult is its cleavage and lesser will be the reactivity. The order of bond dissociation enthalpy of different C-X bonds is: C−F>C−Cl>C−Br>C−I The order of reactivity towards SN2 reactions is the reverse.Q.53 Predict the product of the following reaction

Q.54 What happens when benzal chloride is boiled with aqueous NaOH solution?Answer: Benzaldehyde is formed.

Q.55 Alkyl chlorides can be prepared by refluxing alcohol with thionyl chloride in the presence of pyridine. Why is pyridine used?Answer: Thionyl chloride is the chlorinating agent in the reaction.

Pyridine is a tertiary base and forms a salt with HCl. Thus, it removes one of the products and facilitates the above reaction in the forward direction.

Q.56 Why is cyclopropyl chloride less reactive than cyclopentyl chloride towards SN1 reaction?

Q.57 When heated to 300°C, neopentyl chloride forms 2-chloro-2-methylbutane. Why?

Q.58 Name the alkyl halide which can be used to prepare methane and ethane in single step.

Answer: Methyl halide gives methane by reduction and ethane as a result of Wurtz reaction.

Q.59 What happens when benzene is reacted with chlorine in the presence of ultraviolet light?

Answer: Benzene hexachloride is formed as the addition product.

Q.60 Perfluorocarbons are remarkably stable; why?

Answer: The prefix per implies that all the hydrogen atoms of a particular hydrocarbon have been replaced by F atoms. For example, CF3(CF2)6CF3 or  CF3−CF2−CF2

CF2−CF2−CF3 Since F atom is strongly electronegative and has a very high negative electron gain enthalpy, C- F bond is of polar nature. With the increase in the number of F atoms around the carbon atom, the magnitude of +δ charge on it increases and it acquires more electrostatic force of attraction for δ-charge on F atoms. As a result, strength of C- F bond increases and perfluoro carbons become quite stable as well as inert.

Q.61 Identify the compound in the following pair that reacts with sodium iodide in acetone at a faster rate towards SN2 mechanism. 1-Chlorohexane or cyclohexyl chloride:Answer:

1-Chlorohexane is a primary alkyl halide and is expected to be more reactive towards SN2 reactions as compared to cyclohexyl chloride which is secondary in nature. This is because of less steric hindrance present in primary alkyl halide.Q.62 Give the major products when 2-Bromo 3-methylbutane is reacted with sodium ethoxide.

Answer: Two products are formed in this reaction 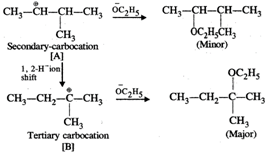 Please note that the tetiary carbocation formed as a result of 1, 2-hydride ion shift is more stable than the secondary carbocation.Q.63  Three alkyl halides A, B and C with molecular formula C7H15Cl have different boiling points. These  are optically active in nature. On reacting with Mg dissolved in ether and then with water, each compound gives 2, 4-dimethylpentane. Suggest structures for the three isomers.

Answer: The structure of hydrocarbon is:

The possible structures of three isomeric haloalkanes [A], [B] and [C] are:

Q.64 Why does not ammonolysis of alkyl halides yield pure amines?

Answer: Alkyl halides react with ammonia to form a mixture of primary, secondary, tertiary amines and quaternary ammonium salts. Therefore, pure amines are not obtained as a result of the reaction. For details, consult Section 11.7.Q.65 2-Bromopentane is treated with alcoholic KOH solution. What is the major product formed in this reaction? What is the name of the reaction?Answer: The reaction is known as β-elimination and the major product is pent-2-ene according to Saytzeff's rule.

Q.67 Explain why displacement of cyanide ion and amide ion is not observed in nucleophilic substitution reaction.

Answer: Both cyanide ion (CN−) and amide ion (NH−2) are powerful nucleophiles and it is not easy to displace them by other nucleophiles in the nucleophilic substitution reactions.Q.68 Why is chloroform not used as anaesthetic these days? What is the commonly used anaesthetic?

Answer: Chloroform is not used as an aesthetic because of its slow oxidation to poisonous gas phosgene. Halothane (CF3CHClBr)is the commonly used an aesthetic these days.Q.69 Which compound in the following pairs will react faster in SN2 reaction? (a) CH3BrorCH3I (b) (CH3)3Br or CH3Br (c) CH2=CHBror CH2=CH−CH2Br.

Answer: This is a nucleophilic substitution reaction. The carbocation initially formed is resonance stabilised and gives two different alcohols on reacting with water.

Answer: Fluorine (F) being a highly electronegative element has a strong -Ieffect. Therefore, when H+ from acid (electrophile) attacks the substrate, a primary carbocation is preferably formed. This reacts with the anion to give the desired product.

Q.73 Predict the order of reactivity of following compounds in SN1 reactions.

which is more reactive and why?Answer:

more reactive because F atom being highly electronegative has a strong-I effect. It destabilises the carbocation towards nucleophilic attack as compared to

in which CH3 group is an electron releasing group and it stabilises the carbocation.

Q.75   What will be the major organic product of the following reaction? C6H5C2H5

Answer: When ethyl benzene is treated with  in presence of light, the bromine free radical formed during the reaction, abstracts the α (but not β-)hydrogen from the ethyl group to form a resonance stabilized benzylic radical (I) which then reacts with Br2 to form 1-bromo-1-phenylethane(II). This on treatment with NaCN undergoes nucleophilic substitution to form 2-phenylpropanenitrile (III).

Q.76 Write down the structure of the product of the following reactions.

?Answer:  (i) 3∘Alkyl halides on treatment with a strong base undergo dehydrohalogenation to form alkenes, i.e.,

(ii) Addition of H+ to 3-methyl-1-butene first gives 2∘ carbocation (I) which being less stable rearranges to the more stable 3∘ carbocation (II). Nucleophilic attack by Br− ion on this carbocation gives 2-bromo-2-methylbutane as the major product,

Q.77 An alkyl halide (A), on reaction with magnesium in dry ether followed by treatment with ethanol gave 2-methylbutane. Write all the possible structures of A.

Answer: The structures of all the possible alkyl halides that can be obtained by monohalogenation of 2-methylbutane are :

The Grignard reagents of all these four alkyl halides will give 2-methylbutane on treatment with ethanol.Q.78 Differentiate between chiral and achiral molecules.Answer: A chiral molecule is one that is not super imposable on its mirror image. These molecules contain one asymmetric or chiral carbon atom. For example, butan-2-ol. An achiral molecule, on the other hand, is one which is super imposable on its mirror image. For example, propan-2-ol.Q.79 Identify and indicate the presence of centre of chirality, if any, in the following molecules? How many stereo isomers are possible for each. (i) 2-Aminobutane (ii) 3-Bromopent-1-ene (iii) 1, 2-Dichloropropane. (iv) 3-Methyl-1-pentene

Q.81 Differentiate between retention and inversion.

Answer: As the size of the alkyl group increases, SN2 reactivity decreases. Further, C−Br bond being weaker is easier to break than C−Cl bond. Therefore, the overall increasing SN2 reactivity follows the order : (CH3)2CHCl<CH3CH2Cl<CH3Cl<CH3Br.Q.83 Predict the order of reactivity of the following compounds in SN1 reactions.

Answer: The reactivity in  SN1 reactions depends upon the stability of the intermediate carbocation which an alkyl halide gives on ionization. (i)

will react faster than

Since 20 carbocations are more stable than 10 arbocations, therefore, 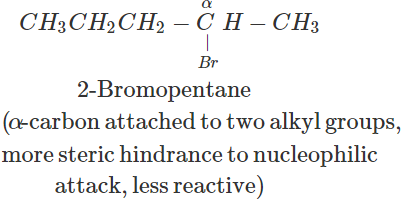 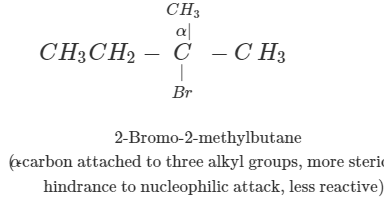 Write the structures of the products.

Q.87 Account for the following: (a) Chloromethane reacts with KCN to form ethanitrile as main product and with AgCN to form methyl isocyanide as chief product. (b) Use of DDT was banned in United States in 1973. (c) Benzylic halides show high reactivity towards SN1 reaction.Answer: (a) Cyanide ion is an ambident ion. It has the following two resonating structures:

Since KCN is predominantly ionic, the reaction can occur either through carbon or nitrogen. Because C-C bonds are stronger than C-N bonds, therefore, carbon end of CN- ion acts as the nucleophile on chloromethane to give enthanenitrite as the main product.

In contrast, Ag?CN: is predominantly covalent. Therefore, only electron pair on nitrogen is available for nucleophilic attack on chloromethane to form methyl isocyanide as the chief product

(b) Due to chemical stability of DDT and its fat solubility, DDT is not completely metabolized very rapidly by the animals. Instead it gets deposited and stored in fatty tissues of animals which causes toxicity. As a result, use of DDT was banned in U.S. in 1973. (c) Benzyl halides reality undergo ionization to give benzyl cation which is stabilized by resonance (refer to page 10/31). Since carbocations are reactive chemical species, therefore, benzyl halides are very reactive in SN1  reactions.

Q.88 Propose a mechanism of the reaction taking place when (a) (-)-2-Bromooctane reacts with sodium hydroxide to form (+)-octan-2-ol (b) 2-Bromopentane is heated with (ale). KOH to form alkenes.

Answer: (a) 2-Bromooctane is a chiral molecule and exists as two optical isomers (enantiomers), i.e., (+) and (-). 2-bromooctane. When (-)-2-bromooctanes is treated with NaOH, it undergoes SN2 reaction in which OH−ion attacks from the backside. Inversion of configuration occurs and (+)-octan-2-ol is formed (refer to Fig. 10.10, page 10/36). (b) 2-Bromopentane on heating with alc. KOH undergoes dehydrohalogenation to give a mixture of two alkenes, i.e., 2-pentene as the major product (Sayzeff product) and 1-pentene as the minor product.

Answer: Both C6H5CHClCH3and C6H5CH2Clare benzylic halides and hence undergo hydrolysis in aqueous KOH by SN1 mechanism. But in SN1 reactions,

reactivity depends upon the stability of the intermediate carbocations. Now C6H5−CHClCH3 on ionization gives a 2∘ carbocation, C6H5C+HCH3(I) which is stabilized both by + R-effect of the C6H5 group and +1-effect of the CH3 group but C6H5CH2Cl on ionization gives a 1∘ carbocation C6H5C+H2(II) which is only stabilized by +R-effect of the C6H5C+H2. Since carbocation (I) is more stable than carbocation(II), therefore, C6H5CHClCH3 undergoes hydrolysis more easily than C6H5CH2Cl.Q.90 Arrange the following in the decreasing order of reactivity towards SN2 displacement reaction and give reasons in support of your answer. (a)C2H5Br,C2H5I,C2H5Cl (b)  (CH3)3CBr,CH3CH2CHBrCH3,CH3CH2CH2CH2Br