Ques 1: Why did the author’s grandfather decide to buy Toto? Ans: Grandfather was very fond of animals and when he saw little Toto tied to a feeding trough, he felt bad for him and wanted to take care of him. Toto looked out of place and grandfather decided to bring it to his own nearby zoo. He found Toto very amusing. 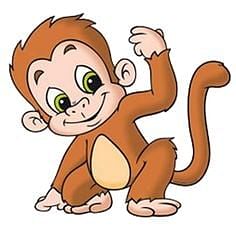 Ques 2: Why could not Toto and Nana become friends? Ans: Toto was very wicked and naughty and could not calm for even a moment. He always found something to destroy around him. Nana on the other hand was a well behaved and disciplined animal. When they were together Toto teased her by biting on the long ears of Nana and Nana got furious at him. Thus, Nana and Toto could never become friends.Ques 3: How does Toto become a problem to grandfather while going to Saharanpur?Ans: While going to Saharanpur, Toto behaved well. When grandfather was producing his ticket, Toto suddenly poked his head out of the bag. He gave the ticket collector a wide grin. The ticket collector insisted that grandfather must buy the ticket for the pet. And proved to be a big problem for grandfather.Ques 4: Where was Toto kept immediately after grandfather got him? Why?Ans: Toto was kept in a closet. He was tied securely to a peg because his presence was to be kept a secret from the writer’s grandmother as she abhorred animals.Ques 5: Who was Nana? How did Toto tease Nana? Ans: Nana was the family donkey. Toto was kept in the stable with Nana, where they both used to fight, Toto used to tease Nana by biting onto her long ears with his sharp little teeth. Even Nana got fed up with Toto and could no longer put up with him.Ques 6: In what sense was Toto “a pretty monkey”.Ans: Toto was a pretty monkey. His bright eyes sparkled with mischief beneath the deep-set eyebrows, and his teeth, which were a pearly white, were very often displayed in a smile that frightened the life out of elderly Anglo-Indian ladies. But his hands looked driedup as though they had been pickled in the sun for many years. Yet his fingers were quick and wicked and his tail, while adding to his good looks served as a third hand. He could use it to hang from a branch and it was capable of scooping up any delicacy that might be out of reach of his hands.Ques 7: How did Toto’slove for taking bathe almost led to his being half–boiled?Ans: Toto used to love taking bathe in hot water. Once when a kettle was kept on fire with water to boil for tea, Toto sat in it. When the water began to boil, Toto tried getting up but found outside cold. So he again sat down. He kept on hopping outside and then again inside and after sometime, he started enjoying this game.Ques 8: Why did the grandfather give away Toto, the monkey? Ans: Toto was very naughty and he troubled everyone. The other pets were not happy with him and he broke a lot of dishes, tore clothes, curtains and wallpapers. He had become very difficult to handle and so grandfather gave Toto away.Ques 9: Why did the grandfather hide Toto for some time when he brought him home?Ans: Grandfather was very fond of animals but it was not the case with the grandmother. She did not like animals as much as him and would get annoyed when he would bring an animal home. To avoid this situation, grandfather hid Toto for some time and decided to announce his arrival to her when she was in a pleasant mood.Ques 10: Why did grandfather decide to take Toto along with him to Dehradun?Ans: Grandfather decided to take Toto along with him to Dehradum as there were many other pets also / that lived there. But Toto would not allow any of his companions to sleep at night. So, he made this decision.Ques 11: Give the names of Grandfather’s pets. Where did they live?Ans: The names of the Grandfather’s pets were Nana the donkey and Toto the monkey a tortoise, a pair of rabbits, a tame squirrel and a goat. They lived in a big cage in the servant’s quarters.

The document Short & Long Answer Question - The Adventures of Toto Notes | Study English Class 9 - Class 9 is a part of the Class 9 Course English Class 9.
All you need of Class 9 at this link: Class 9
Join Course