The component of the solution that dissolves the other component in it is called the solvent.

The component of the solution that is dissolved in the solvent is called solute. 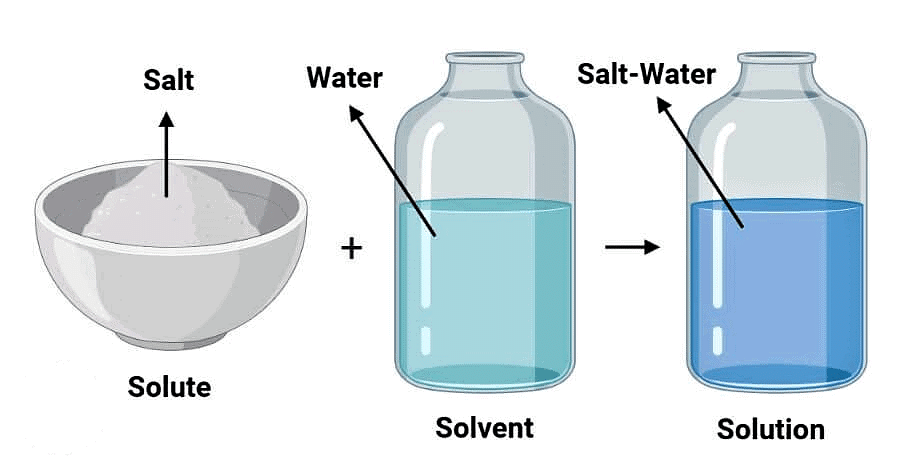 A solution of iodine in alcohol is known as tincture of iodine. It has iodine (solid) as the solute and alcohol (liquid) as the solvent.

Q4. What are alloys?

The homogeneous mixture of two or more metals or a metal and non-metal is called an alloy.Example: Steel is an alloy of Iron and Carbon.

Q5. Give one example of gas in liquid solution.

Cold-drinks, carbon dioxide gas as solute is mixed with water as a solvent.

Q6. How can a solution be dilute or concentrated?

The amount of solute dissolving in a solvent decides whether the solution is dilute or concentrated.

Q7. What is “concentration of a solution”?

Q8. State the difference between aqueous and, non-aqueous solution.

Q9. What is “solubility” of a solute?

The amount of the solute present in the saturated solution at the given temperature is called its solubility.

Q10. What is a saturated solution?

The maximum amount of solute dissolved in a solvent at a given temperature is called saturated solution, where no more solute can dissolve further.

Q11. What is an unsaturated solution?

If the amount of solute contained in a solution is less than the saturation level, it is called an unsaturated solution.

Q12. How can you convert the saturated solution into unsaturated or vice-versa?

Water can dissolve large number of substances in it.

Q14. What is Tyndall effect?

The scattering of light by colloidal particles is known as Tyndall effect. 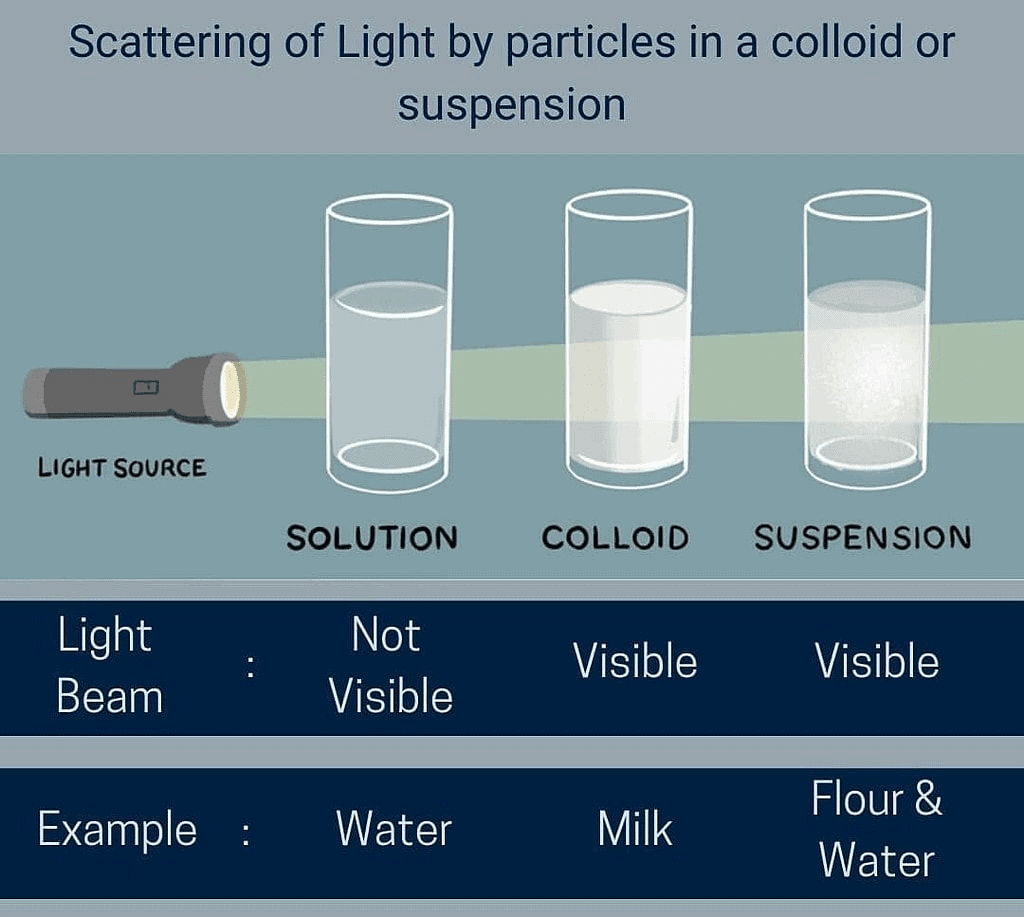 Q15. How can we separate colloidal mixtures?

When both the dispersed phase and dispersing medium is liquid, it is called emulsion.Example: Milk, Face Cream.

When the solid or liquid is dispersed in a gas it is called aerosol.Example: Smoke, Fog.

Q18. What is the principle for separation of immiscible liquids?

The principle of separating immiscible liquids into layers depending on their densities. The less denser liquid collects at the top and more denser liquid at the bottom.

Q19. What is chromatography?

Chromatography is the technique used for the separation of those solutes that dissolve in the same solvent.

Q20. What is distillation?

Distillation is the separation technique of two miscible liquids that boils without decomposition and have sufficient difference in their boiling points.

Q21. How can you separate two liquids that have less than 25 K difference of boiling points?

To separate a mixture of two or more miscible liquids for which the difference in boiling points is less than 25 K, is fractional distillation.

It is an apparatus used to convert gas into liquid by cooling it.

Q23. What is crystallisation?

Q1. Why is mixture called an impure substance?

Mixture consists of different components which retain their properties and can be easily separated by physical processes, hence it is called as impure substance.

Q2. Give the differences between mixture and compound.

Q3. Distinguish between a physical change and chemical change.

Q4. State the properties of a solution.

Properties of a solution are:

Q5. State the properties of a suspension.

Properties of a suspension:

Q6. What is a colloidal solution?

It is a heterogeneous solution which appears to be homogeneous, particles size is very small and so cannot be seen with naked eyes but it is stable.Example: Milk and Blood.

Q8. Give the applications of centrifugation.

Application of centrifugation are:

Q9. Give the applications of chromatography.

Applications of chromatography are:

Q10. Why is crystallisation better than evaporation?

Q11. How will you separate a mixture of oil and water?

Q12. A student is given a mixture of naphthalene ball’s powder and common salt. He needs to separate this mixture. How will he do this?

Q13. How can we obtain different gases from air?

Air is a homogeneous mixture and its components can be separated by fractional distillation.The flow diagram shows the steps involved in the process. 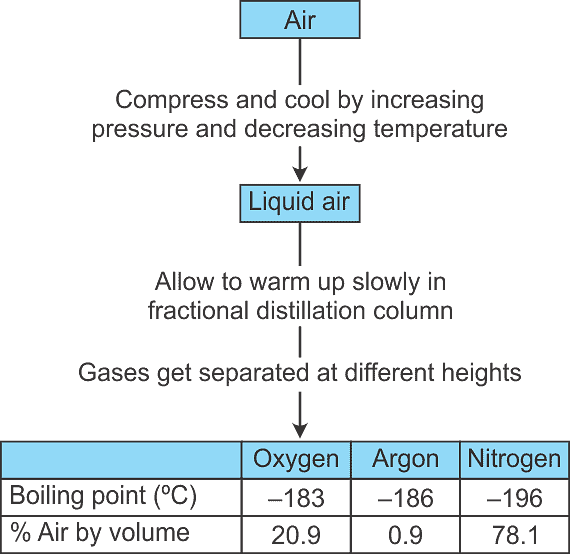 Q14. Draw a flow diagram to show the water purification system in waterworks.

Q15. Why is air considered as a mixture and not a compound?

Air is considered as a mixture because it exhibits following properties:

Q16. How can you prove that water is a compound?

Water is a compound because if we pass electricity through it then at two different electrodes, we get two different gases i.e., oxygen and hydrogen during the electrolysis of water. The ratio of oxygen: hydrogen is 1: 2 by number of molecules.(i) The properties of oxygen and hydrogen gases sire entirely different from that of liquid water.(ii) The ratio of oxygen: hydrogen combination is always constant i.e., 1: 2 by volume.(iii) To separate the components of water, we need electrolytic cell, and it is not a simple process.

Q17. How can we convert saturated solution into unsaturated by heating?

Q18. What is the difference in fog and smoke?

Q19: If 20g of salt is present is 220 g of solution, calculate the concentration of

Q1. Give the difference between true solution, colloidal solution and suspension.

The difference between true solution, colloidal solution and suspension

Q2. State the different types of colloids with examples.

Q3. (a) Define solution.(b) Give different types of solutions with one example each.

(a) Solution: It is a homogeneous mixture of two or more substances. It consists of solute and solvent.(b) Different types of solution:

Q1. Anil’s sister accidentally added some water into the bottle containing olive oil and she was afraid of the scolding. Anil helped his sister and separated the water from olive oil using bottle as a separating funnel.(a) What is the principle of using and working of separating funnel?(b) Suggest two separation techniques used to separate liquid mixtures.(c) What value of Anil is seen in the above case?

(a) The principle of separating funnel is difference in the densities of two liquids.(b) Liquid mixtures can be separated by distillation and fractional distillation.(c) Anil showed the value of helping, caring and responsible behaviour.

(a) If the labour immediately enters the manhole on removing its lid he would die due to suffocation and inhalation of poisonous gases which are compressed and released by sewage.(b) Gases released from the sewage manhole are methane, carbon dioxide and hydrogen sulphide.(c) Preeti shows the value of moral responsible behaviour and aware citizen.

Q3. Prasanna wanted to buy a deodorant from the shop. While buying a bottle he felt that it was slightly heavier than usual deodorant bottle that he purchased everytime. He read the weight mentioned on the bottle and told the shopkeeper to weigh the same. He found the bottle was heavy and on opening the deodorant bottle he found it half-filled with water. He complained the matter to the consumer authority.(a) Define density.(b) Apart from water what is the other substance that some shopkeepers add into the deodorant.(c) What value of Prasanna is reflected in this act?

(a) Density of any substance is defined to be the mass of the substance per unit volume.(b) One can add some cheap gases or compressed air in the deodorant bottles.(c) Prasanna showed the value of being having leadership quality, rightful, aware and responsible citizen.

Q4. Rita’s father always got his vehicle checked for pollution control. He got it tested for the aerosol if released by his car. He also uses unleaded petrol and makes use of public transport wherever possible. He sparingly use his car.(a) What is aerosol?(b) What happens when smoke released from vehicle mixes with fog?(c) What are the values of Rita’s father is reflected here?

(a) When the solid or liquid is dispersed in a gas it is called aerosol.Example: Smoke.(b) When smoke mixes with fog it forms smog.(c) Rita’s father is an aware citizen, environmentally concerned and dutiful.