The document Short & Long Question Answers: Nutrition in Animals Notes | Study Science Class 7 - Class 7 is a part of the Class 7 Course Science Class 7.
All you need of Class 7 at this link: Class 7

Q1: What do you mean by animal nutrition?

Ans :  Animal nutrition includes requirement of nutrients, mode of intake of food, and its utilization in the body.

Q2: What is digestion?

Ans :  Digestion is the process of breakdown of complex components of food such as carbohydrates into simpler substances that is absorbed and assimilated in the body.

Q4: What are the functions of the tongue in human body?

The functions of the tongue are as follows:

Q5: What are Milk teeth and permanent teeth?

Ans :  The first set of teeth grows during infancy and they fall off at the age between six to eight years. These are termed as milk teeth. The second set that replaces them are the permanent teeth. The permanent teeth may last throughout our life or fall off during old age.

Ans :  Our mouth contains some useful bacteria but if we do not clean our teeth and mouth after eating, many harmful bacteria also begin to live and grow in it. These bacteria break down the sugars present from the leftover food and release acids. These acids gradually damage the teeth and causes tooth decay.

Q8: Glucose is considered as the source of instant energy, why?

Ans :  Glucose is the simplest form of carbohydrate that can be easily broken down to give energy. Hence, we get instant energy from glucose. Also, glucose mixes directly into the blood stream making it readily available to the body.

Q9: What is mastication?

Ans :  Mixing of saliva with chewed food is called mastication, this moisten the food and helps in swallowing food.

Ans :  The powerful muscles in oesophagus gently push food down to the stomach in a wave like action which is called peristalsis.

Q11: What are secreted inside the stomach?

Ans :  Gastric juice is secreted by the walls of stomach which contains HCl and Pepsin. HCl helps to kill the germs present in food. After mixing with the food it provides an acidic medium to the food which is essential for the activation of pepsin enzyme. Pepsin digests protein into peptides.

Ans :  There are different types of enzymes which are used for the digestion of different food materials like carbohydrates, fats, protein etc. The process of digestion involves the association of several catalytic organic compounds such as amylase, pepsin, lipase, trypsin etc. These organic compounds are known as digestive enzymes.

Q13: What do you mean by absorption in terms of digestion of food?

Ans :  The food after digestion in stomach passes into the blood vessels in the wall of the intestine. This process is called absorption.

Q14: Name and explain the type of carbohydrates that can be digested by ruminants but not by humans.

Ans :  Cellulose is the carbohydrate that can be digested by ruminants. Ruminants have large sac like structure between the small intestine and large intestine which is responsible for digestion of cellulose in them. The cellulose of the food is digested by the action of certain bacteria which are not present in human beings.

Q15: What role does villi performs in the small intestine?

Ans :  The villi increase the surface area for absorption of the digested food. The surface of the villi absorbs the digested food materials and passes them into blood. The absorbed substances are transported via the blood vessels to different organs of the body.

Ans :  Amoeba is a single-celled organism found in pond water. It has a cell membrane, a dense, rounded nucleus and many bubble-like vacuoles. Amoeba constantly changes its shape and position. It pushes out one or more finger like projections, called pseudopodia or false feet for movement and capturing of food. Amoeba feeds on microscopic organisms. When it senses food, it pushes out pseudopodia around the food particle and engulfs it. The food becomes trapped in a food vacuole and digested by the digestive juices.

Q17: Differentiate between assimilation and egestion.

Ans : Absorbed digested food materials are transported via the blood vessels to different organs of the body where they are used to build complex substances such as the proteins required by the body. This process is called assimilation but the process of removal of waste faecal matter through the anus from time-to-time is called egestion.

Q18: What is rumination?

Ans :  A process in which partially digested food returns to the mouth in small lumps and the animal chews it is called Rumination, and such types of animals are called Ruminants.

Q19: How does digestion occur in ruminants grass-eating animals?

Ans : Ruminants quickly swallow the grass and store it in a separate part of the stomach called rumen. Here the food gets partially digested and is called cud. Later the cud returns to the mouth in small lumps and the animal chews it. This process is called rumination. The cellulose present in grass is digested here by the action of certain bacteria which are not present in humans.

Q20: Write one similarity and one difference between the nutrition in amoeba and human beings.

Ans : Similarity: Both amoeba and human beings use digestive juices for digestion of food.

Difference: Humans need to chew food whereas in amoeba, there is no chewing of food.

Q21: What is the site of production of bile? Which component of the food does it digest?

Ans : Bile is produced in liver and is stored in a sac like structure called the gall bladder. The bile plays an important role in the digestion of fats, it acts on fat and convert them into simpler form.

Q22: What is the role of pseudopodia in amoeba’s life?

Ans : Pseudopodia helps amoeba in movement and capture of food, it is also called as false feet.

Q23: What happens to the food in mouth and oesophagus of the digestive tract?

Ans : When food is ingested the salivary glands which secrete saliva acts on it in the mouth. The saliva breaks down the starch into sugars. Oesophagus is along, narrow, muscular tube which directly leads to the stomach. It is about 25 cm long and passes downwards through the neck, the thorax and the abdominal cavity. Oesophagusgently pushes masticated food down to the stomach in a wave - like action, called peristalsis

Q24: What happens to the food in stomach of the digestive tract?

Q25: What happens to the food in small intestine of the digestive tract?

Ans : The small intestine is highly coiled and is about 7.5 metres long. Liver is the largest gland in the body. It secretes bile juice that is stored in a sac called the gall bladder. It digests fats. The pancreas is cream colour red gland secretes pancreatic juice that acts on carbohydrates and proteins and changes them into simpler forms. The carbohydrates get broken into simple sugars such as glucose, fats into fatty acids and glycerol, and proteins into amino acid, she digested food can now pass into the blood vessels in the wall of the intestine having thousands of finger-like villi. The surface of the villi absorbs the digested food materials. The absorbed substances are transported via the blood vessels to different organs of the body.

Q26: What happens to the food in large intestine of the digestive tract?

Ans : The food that remains undigested and unabsorbed enters into the large intestine from small intestine. It is about 1.5 metre in length. Its function is to absorb water and some salts from the undigested food material. 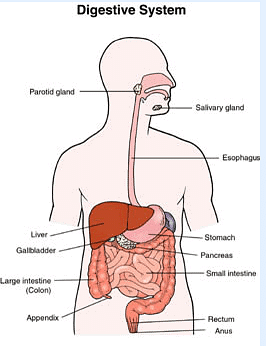 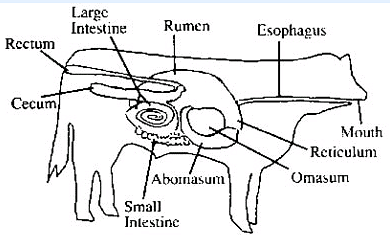 Q1: Can we survive only on raw, leafy vegetables / grass? Discuss.

Ans : We know that animals like most of the bacteria, non-green plants and human being do not possess the ability to synthesize their own food. Therefore, they depend upon autotrophs for their food supply either directly or indirectly. The green plants (leafy vegetables / grass) trap solar energy and manufacture their food in the form of glucose. So, leafy vegetables and grass can provide sufficient energy required for the survival of human being.

The document Short & Long Question Answers: Nutrition in Animals Notes | Study Science Class 7 - Class 7 is a part of the Class 7 Course Science Class 7.
All you need of Class 7 at this link: Class 7