The document Short Answer Question (Part - 2) - Some Natural Phenomena Notes | EduRev is a part of the Class 8 Course Science Class 8.
All you need of Class 8 at this link: Class 8

Q3: Who established the relation between sparks produced by amber and the thunderstorms?Ans. An American Scientist Benjamin Franklin established that sparks produced by amber are similar to those produced in sky during a thunderstorm. He flew a kite tied with a silken thread, which had an iron key attached to it on a rainy day. During lightning he felt the shock through iron key, which proved that clouds also carried charges.

Q4: How can charging take place when the substances are rubbed?Ans. When a plastic refill is rubbed with polythene, it acquires a small electric charge. Similarly, when a plastic comb is rubbed with dry hair, it also acquires a small charge. These objects are called charged objects. In this process of charging the refill and the plastic comb, polythene and hair also get charged.

Q5: How many different types of charges are there? Write the nature of charges on glass rod and silk cloth when they are rubbed each other?

Q7: What is electric discharge? How does it occur?Ans. The negative and positive charges meet, producing streaks of bright light and sound. This process is called electrical discharge, the process of electric discharge can occur between two or more clouds or between clouds and earth.

Q9: During lightning what should we do?Ans. (i)Hearing thunder is an alert to rush to a safer place.(ii) After hearing the last thunder wait for some time before coming out.

Q10: What is lightning conductor? How does it protect building from lightning?Ans. Lightning conductor is a device used to protect building from the effect of lightning. A metallic rod taller than the building is installed in the walls of the building during its construction. One end of the rod is kept out in the air and the other is buried deep in the ground. The rod provides easy route for transfer of electric charge to the ground. 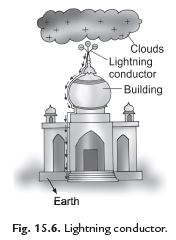 Q11: What is an earthquake? How does it occur?Ans. An earthquake is a sudden shaking or trembling of earth which lasts for a very short time. It is caused by a disturbance inside the earth’s crust. There can be a great loss to life and property. They can cause flood, tsunami and landslides. The magnitude of the earthquake is measured by an instrument called seismograph and it is measured on Richter Scale. 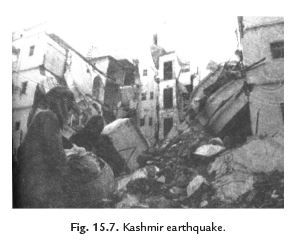 Q12: Write about two last major earthquakes in India.Ans. (i) A major earthquake occurred on 26 January 2001 in Bhuj district of Gujarat.(ii) A major earthquake also occurred in India on 8 October 2005 in Uri and Tangdhar towns of North Kashmir.Q13: Name the regions of the earth more prone to earthquakes.Ans. Earthquakes are caused by the movement of plates. The regions which fall on the boundaries of these plates are called danger zones. Earthquakes are most likely to happen in these danger zones.Q14: What are fault zones? Name the fault zones in India.Ans. The areas fall between the boundaries of two plates are called weak zones or seismic or fault zones. In india the most threatened areas are Kashmir, Western and Central Himalayas, whole of North-East, Rann of Kutch, Rajasthan, Indo-Gangetic plain and some areas of south India. 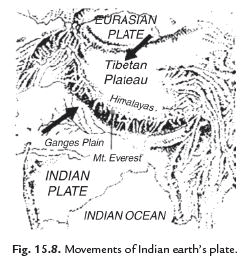 Q15: What are the protections to be taken against earthquakes?

Ans: If you are at home:

1. Take shelter under the table and stay there until the stoppage of shaking

2. Keep yourself away from the tall or heavy objects that may fall on you and damage you.

3. If you are on bed, do not get up and keep a pillow on your head

If you are outside the home:

1. Find a clear spot, away from buildings, trees, poles and electric poles, signboards and overhead power lines and drop to the ground.

2. Do not use elevators if they are available at some place outside your house

3. If you are in a car or a bus, do not come out and drive slowly to a clear spot.Q16: What are the protections to be taken against lightning?

Ans: During lightning avoid going at an open place, try to rush towards safe place like in a house or building, if you are travelling in nay vehicle like car or bus, you are safe inside with windows and doors of the vehicle closed. If you are in a forest take shelter under a smaller tree.Q17: Explain a lightning conductor and its function.

Ans: Lightning conductor is the device that protects a tall building from lightning strike, by providing an easier path for current to flow to earth than through the building. It consists of a thick copper strip of very low resistance connected to the ground below. A good connection to the ground is essential and is made by burying a large metal plate deep in the damp earth. In the event of a direct lightning strike, the current in the conductor may be great as to melt or even vaporize the metal, but the damage to the building will nevertheless be limited.Q18: List the things that you should do while thunderstorm.

Ans: During lightning avoid going at an open place, try to rush towards safe place like in a house or building, if you are travelling in nay vehicle like car or bus, you are safe inside with windows and doors of the vehicle closed. If you are in a forest take shelter under a smaller tree.

Q19: List the things that you should not do while thunderstorm.

Ans: During lightning avoid going at an open place, try to rush towards safe place like in a house or building, if you are travelling in nay vehicle like car or bus, you are safe inside with windows and doors of the vehicle closed. If you are in a forest take shelter under a smaller tree.