The document Short Answer Questions : Is Matter Around Us Pure | EduRev Notes is a part of the Class 9 Course Science Class 9.
All you need of Class 9 at this link: Class 9

Is Matter Around Us Pure

Ques 1. Suggest separation technique(s) one would need to employ to separate the following mixtures.(a) Mercury and waterAns: The technique of Filtration Ques  2. Which of the tubes in figure  (a) and (b) will be more effective as a condenser in the distillation apparatus?

Ans: Condenser (a) will be more effective because it provides more surface area for cooling of the vapours passing through it.

Ques  3. Salt can be recovered from its solution by evaporation. Suggest some other technique for the same?

Ans: Salt can be recovered from its solution by 'crystallisation'. Crystallisation' is a better technique than 'evaporation' because it removes soluble impurities also, which do not get removed in the process of evaporation.

Ques  5. While diluting a solution of salt in water, a student by mistake added acetone (boiling point 56°C). What technique can be employed to get back the acetone? Justify your choice.Ans: Acetone is soluble in water, a homogeneous mixture is obtained and hence separation by separating funnel cannot be used. Acetone can be get back by simple distillation because the difference in the boiling points of acetone and water is more than 25oC. Boiling point of acetone 56°C Boiling point of water 100°C In distillation flask, acetone will boil at 56°C and change into vapours and can be collected in flask after condensation.

Apart from this, colloidal particles are charged and repel each other. This fact also do not the particles of colloidal solution to settle down. Whereas particles of suspension are larger, heavy and have less movement, thus settle down due to gravity.

Ques  8. Smoke and fog both are aerosols. In what way are they different?

Ques  9. Classify the following as physical or chemical properties(a) The composition of a sample of steel is: 98% iron, 1.5% carbon and 0.5% other elements.Ans: This is the physical property. Since steel is the alloy and considered as mixture of more than one elements. (c) Metallic sodium is soft enough to be cut with a knife.Ans: Since, it shows the softness of sodium, thus is a physical property.

(d) Most metal oxides form alkalis on interacting with water.Ans: This property shows the reaction of metal oxides with water, thus a chemical property. 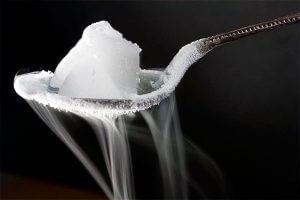 Fig: Mixture of sand and water Ques  14. An element is sonorous and highly ductile. Under which category would you classify this element? What other characteristics do you expect the element to possess?Ans: Since a metal is sonorous and ductile, thus if an element possesses these qualities this will be kept under the category of metals. The other qualities of metal are good conductor of heat and electricity, lustrous, malleability, etc. (e) Two or more coloured constituents soluble in some solvent.Ans: The ink is the mixture of dyes of many colours. The different dyes of ink can be separated using chromatography.

(d) A mixture of two or more miscible liquids, for which the difference in the boiling points is less than 25 K can be separated by the process called____________.Ans: Fractional distillation

(e) When light is passed through water containing a few drops of milk, it shows a bluish tinge. This is due to the _________ of light by milk and the phenomenon is called _________ . This indicates that milk is a ________ solution.Ans: scattering, Tyndall Effect, colloidal

Ques  17. Sucrose (sugar) crystals obtained from sugarcane and beetroot are mixed together. Will it be a pure substance or a mixture? Give reasons for the same.Ans: Pure substance, since it contains a single component, i.e. sucrose. Ques  19. Can we separate alcohol dissolved in water by using a separating funnel? If yes, then describe the procedure. If not, explain.Ans: The mixture of alcohol and water cannot be separated using a separating funnel, since these are not immiscible liquids.The mixture of alcohol and water can be separated by the process of distillation.

Carbon is a non metal hence carbon dioxide is acidic in nature. When it is dissolved in water an acidic solution is formed.

Ques  21. Non metals are usually poor conductors of heat and electricity. They are non-lustrous, non-sonorous, non-malleable and are coloured.(a) Name a lustrous non-metal.Ans: Graphite. (b) Name a non-metal which exists as a liquid at room temperature.Ans: Bromine

(f) Name a non-metal which is required for combustion.Ans: Oxygen

Ques  22. Classify the substances given in Figure into elements and compounds

Ques  23. Which of the following are not compounds?