The document Short Answer Questions (Part - 2) - Combustion and Flame Notes | EduRev is a part of the Class 8 Course Science Class 8.
All you need of Class 8 at this link: Class 8

Ans: Global warming is the increase in the average temperature of Earth's atmosphere and oceans, it results in melting of the glacier of the polar region which leads to rise in sea level, causing flood in coastal areas. Even low lying coastal region may get permanently submerged under water because of global warming.Q27: Explain why it is difficult to burn a heap of green leaves but we can easily burn dry leaves?

Ans: A heap of green leaves contains lot of water and has very high ignition temperature, as water is a natural fire extinguisher it do not allow leaves to catch fire easily where as dry leaves contains no water and have low ignition temperature thus they can catch fire easily.Q28: In an experiment 3.5 kg of a fuel was completely burnt. The heat produced was measures to be 160,000 kj. Calculate the calorific value of the fuel.

Q29: What is fuel? Give some examples of a fuel.Ans. The combustible substances which produce heat and sometimes light on combustion is called fuel. Fuel may be solid, liquid and gas. Wood, charcoal, petrol and kerosene are some of the examples of fuel.

Q33: We can boil water in a paper cup while paper catches fire easily. Explain the process.Ans. We take two paper cups. Take some water in one cup and keep the other empty. Heat both the cups. Empty cup starts to burn but the cup containing water does not burn. If we continue heating the water in the cup it starts boiling. The heat supplied to the paper cup is transferred to water by conduction. So in the presence of water the ignition temperature of paper is not reached. Hence, it does not burn. 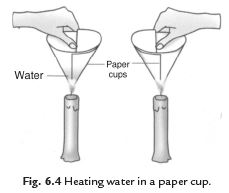 Q34: How does fire brigade works to extinguish fire?Ans. When fire brigade arrives, it pours water on the fire. Water cools the combustible material, so that its temperature is brought below its ignition temperature. This prevents the fire from spreading. Water vapour also surrounds the combustible material, helping in the cutting off the supply of air. So the fire is extinguished. Q36: Explain the structure of a flame.Ans. There are following three parts of a flame:(i) Outer zone: It is non-luminous and the hottest zone. 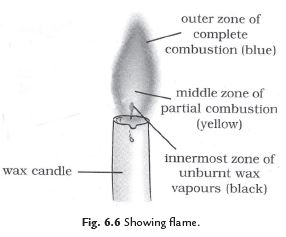 Q37: Why is the colour of outer zone is blue while middle zone is yellow coloured?Ans. Outermost zone: It is blue coloured part because complete combustion takes place in this part due to sufficient amount of oxygen. It is the hottest part of the flame. Middle Zone: The colour of the middle zone is yellow because incomplete combustion takes place in this part for the lack of oxygen. It is less hot part than outer part of the flame.

Q39: What is acid rain? Write its effects. Ans. The oxides of sulphur and nitrogen dissolve in rain water to form acids.Such rain containing acids is called acid rain. It is very harmful for crops, buildings and soil.