The document Short Answer Questions (with Solutions) - The Solitary Reaper Notes | Study English Class 9 - Class 9 is a part of the Class 9 Course English Class 9.
All you need of Class 9 at this link: Class 9 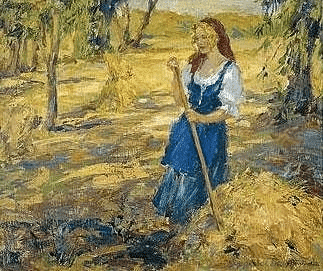 Read the following extracts and answer the questions given below :

1. Will none tell me what she sings? Perhaps the plaintive numbers flow For old, unhappy, far-off things, And battles long ago.

(a) Explain the use of ‘perhaps’ in the second line.

Ans. ‘Perhaps’ is used to show that the poet is not sure about the theme of solitary reaper’s song.

(b) ‘Flow’, – what quality of the solitary reaper song is expressed here?

Ans. He guesses that she might be singing about some unhappy things of the past or the battles fought long ago.

2. Or is it some more humble lay, Familiar matter of today? Some natural sorrow, loss or pain, That has been, maybe again.

Ans. ‘It’ in the first line refers to solitary reaper’s song.

Ans. It means that solitary reaper’s song may be about some ordinary people.

(c) What does the poet wish to convey by saying ‘that has been and maybe again’ ?

Ans. He wishes to convey that the song may be about some natural sorrow which can occur again.

3. Whatever the theme, the maiden sang As if her song could have no ending; I saw her singing at her work And o’er the sickle bending

(a) What other activities is the maiden doing besides singing?

Ans. Besides singing, the maiden is cutting and binding the grain.

(b) What makes the maiden’s song extraordinary?

(c) What effect does the song have over the poet?

Ans. The song left an indelible mark on the poet’s heart.

4. I listened, motionless and still And, as I mounted up the hill, The music in my heart I bore, Long after it was heard no more.

(a) Where does the poet go?

Ans. The poet is climbing up the mountain.

(b) How did the song affect the poet?

Ans. The song left a permanent mark on the poet’s heart.

(c) What does the poet want to convey by ‘‘long after it was heard no more’’?

Ans. The poet wants to say that the music is eternal and can give pleasure even when you do not hear it.

Q1. Discuss the significance of the title of the poem.

Ans. The poem's title and theme are based on the fact that once in the course of his walking tours of Scotland William Wordsworth, the poet, and his sister came across a solitary reaper, a young highland lass, who was reaping and binding corn as it was the harvest time. As she was working peacefully all by herself, she was singing. Her song had a touch of sadness. The memory of this lone girl and the melancholy notes of her song remained with the poet for all time. Wordsworth’s poem “The Solitary Reaper” somehow immortalises her.Q2. ‘Solitary Reaper’ is a poem that depicts a simple peasant girl gifted with an extraordinary voice. What qualities make the girl unforgettable?

Ans. The melodious voice of the Solitary Reaper is unforgettable. It has tender melancholic strains, the sweetest human voice ever heard that haunted the poet for all time. He could not understand the dialect, nor the theme of her song. Her musical notes ran like water and surpassed the beauty of the songs of the nightingale and the cuckoo. The intensity and the enchanting quality of her song left an everlasting impression on the poet's mind.

Q3. Give two examples of hyperbole and alliteration from the poem.

Ans. ‘Silence of the seas,’ and ‘sings a melancholy strain’ ‘perhaps the plaintive numbers flow,’ this poetic repetition of the ‘S’ sound and ‘P’ sound is a device used by poets called alliteration. Hyperbole in also a poetic device in which something written or described is made to sound more exciting, better or dangerous. “O' listen! for the vale profound is overflowing with the sound”. The sound of the reaper's song is so powerful that it fills the deep valleys, it is an exaggeration.

Q4. Why is the song of the solitary reaper compared to the nightingale’s song?

Ans. The nightingale is acclaimed as a songbird endowed with a sweet voice who is supposed to sing in a melodious and soothing way. The solitary reaper's voice is also sweet and melodious. Her song is so sweetly melancholy that it leaves an indelible mark in the poet's mind. Shady haunt is a cool resting place in an oasis in the Arabian desert where weary travellers are resting.

Q5. What arrested the attention of the poet out for a walk in the countryside? [CBSE 2010 (Term I)]

Ans. While walking in the countryside, the poet heard the solitary reaper’s song. He was struck by the fact that the girl was cutting the harvest alone and on a happy occasion singing a melancholy song. It was so melodious that it once caught poet’s attention. He finds her song sweeter than a nightingale and more thrilling than a cuckoo bird.

Ans. One day, while climbing up a hill, the poet hears solitary reaper’s song. The song reminds him of a nightingale and a cuckoo. He finds the song so enchanting that it leaves an indelible mark on the poet's mind and he believes that the memory of the song will remain with him forever. This also shows that music has a universal appeal.

Ans. Once the poet comes across a highland girl while climbing up a hill. The young girl was reaping and binding the corn as it was harvest time. As she was workingpeacefully all by herself, she was singing. The whole valley resounds with her melodious voice but she is ignorant of all this and is totally engrossed in her work.

Q8. What guesses does the poet make about the theme of the Solitary Reaper’s song? [CBSE 2010 (TermI)]

Ans. The solitary reaper was singing the song in a dialect. The poet was unable to comprehend its meaning but was able to gauge from its sad note that it probably relates to some unhappy memories, some battles fought long ago. The poet also guesses that the song may be about the commonplace things like joys and sorrows.

The document Short Answer Questions (with Solutions) - The Solitary Reaper Notes | Study English Class 9 - Class 9 is a part of the Class 9 Course English Class 9.
All you need of Class 9 at this link: Class 9