The document Short Answer Questions - Chapter 1 - Introduction (Microeconomics), Class 12, Economics | EduRev Notes is a part of the Commerce Course Economics Class 12.
All you need of Commerce at this link: Commerce

Q.1. What is economics about?Ans. Economics is the study of the problem of choice arising out of scarcity of resources having alternative uses.Q.2. Define scarcity. Ans. Scarcity means shortage of resources in relation to their demand is called scarcity.Q.3. What is an economy?Ans. An economy is a system by which people get their living.Q.4. Define central problem.Ans. Central problem is concerned with the problems of choice (or) the problem of resource allocation.Q.5. Give one reason which gives rise to economic problems?Ans. Scarcity of resources which have alternative uses.Q.6. Name the three central problems of an economy.Ans.
(a) What to produce?(b) How to produce?(c) For whom to produce?Q.7. What is opportunity cost?

Ans. It is the cost of next best alternative foregone.Q.8. Why is there a need for economizing of resources?Ans. Resources are scarce in comparison to their demand, therefore it is necessary to use resources in the best possible manner without wasting it.Q.9. What is production possibility frontier?Ans. It is a boundary line which shows the various combinations of two goods which can be produced with the help of given resources and technology.Q.10. Why PPC is concave to the origin?Ans. PPC is concave to the origin because of increasing marginal opportunity cost.Q.11. Define marginal rate of transformation.Ans. MRT is the ratio of units of one good sacrificed to produce one more unit of other goods. MRT = Δy / ΔxQ.12. What does a point inside the PPC indicate?
Ans. Any point inside the production possibility curve indicate underutilization of resources.Q.13. What do you mean by the problem of what to produce?Ans. It is the problem of choosing which goods and services should be produced in what quantities.Q.14. What do you understand by the problem of how to produce?Ans. It is the problem of choosing technique of production of goods and services.Q.15. What does the problem for whom to produce indicate?Ans. The problem of for whom to produce refers to the distribution of  goods and services produced in the economy.Q.16. Give two examples each of micro economics & macroeconomics. 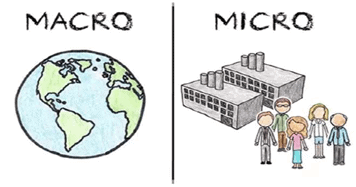 Ans. Micro economics – Individual demand, individual supply
Macroeconomics – Aggregate demand and aggregate supplyQ.17. What does a rightward shift of PPC indicate?Ans. It indicates  a) growth of resources b) improvement in technology

Q.18. What is meant by economising of resources?Ans. It means making best use of available resources.

Q.1. What is production possibility frontier?Ans. It is a boundary line which shows that maximum combination of two goods which can be produced with the help of given resources and technology at a  given period of time.
Example: An economy can produce two goods say rice or oil by using all its resources. The different combination of rice and oil are as follows: 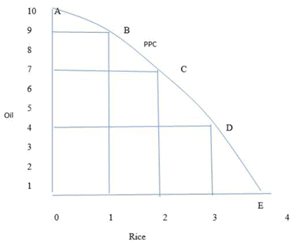 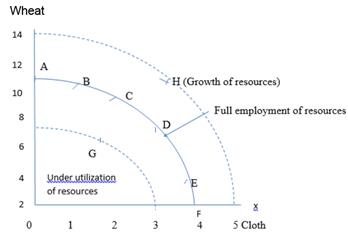 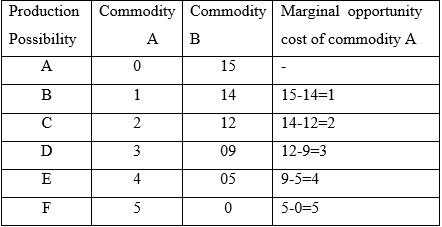 3. Distinguish between micro economics and macroeconomics.