Q1. Describe the circumstances leading to the outbreak of revolutionary protest in France.

The outbreak of revolutionary protest in France was a culmination of social, political, economic and intellectual factors:

Q2. Describe the legacy of the French Revolution for the people of the world during the 19th and 20th centuries.

Q3. What is the significance of 'The Tennis Court Oath' in the French Revolution?

The representatives of the third estate viewed themselves as spokesmen for the whole French nation. They assembled in the hall of an indoor tennis court on the grounds of Versailles on 20th June 1789. They declared themselves as a National Assembly. 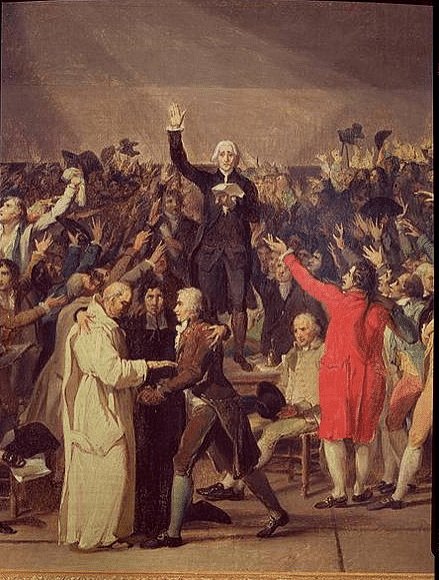 Q4. Explain why the artist has portrayed the nobleman as the spider and the peasant as the fly.

The spider feeds on the fly, whereas the fly does hard labour for finding its food. Similarly, in 18th century, France, the nobles lived off the labour of the peasants. The social reality of the time was that peasants had to pay feudal dues as well as rendering services for the nobles.

Q5. Which groups of French society would have gained from the Constitution of 1791? Which groups would have had reason to be dissatisfied? What developments does Marat (Source B) anticipate in the future?

Only some members of the Third Estate, who were rich and propertied, would have gained from this Constitution. Members of the First and Second Estates would have been Dissatisfied as their privileges were abolished and they had to pay taxes. Marat anticipates another revolution in which the poor will rebel against the rich persons of the Third Estate and overthrow them, just like they had done the noblemen and clergy.

Q6. Imagine the impact of the events in France on neighbouring countries such as Prussia, Austria-Hungary or Spain, all of which were absolute monarchies. How would the kings, traders, peasants, nobles or members of the clergy here have reacted to the news of what was happening in France?

The kings, nobles, clergy, and other privileged sections of these countries would become fearful that what has happened in France can happen in their country also. The peasants would welcome the developments in France and sympathise with the peasants and underprivileged sections of that country.  This is one of the rare paintings by a woman artist. The revolutionary events made it possible for women to train with established painters and to exhibit their works in the Salon, which was an exhibition held every two years. The painting is a female allegory of liberty that is, the female form symbolizes the idea of freedom.

Q7. Describe the picture in your own words. What are the images that the artist has used to communicate the following ideas: greed, equality, justice, takeover by the state of the assets of the Church?The patriotic fat reducing press 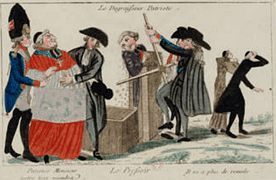 Greed is symbolized by the fat clergyman on the left. The two men accompanying him symbolize government officials who have taken over the assets of the Church. The fat reducing press in the middle symbolizes justice. The man and woman on the right symbolize equality. The whole picture depicts what the revolution stood for.

Q8. How did the French people ultimately get the right to vote for all citizens?

In the summer of 1792, the Jacobins planned an insurrection of a large number of Parisians who were angered by the short supply and high prices of food. On the morning of August 10, they stormed the palace of Tuileries, massacred the king's guards and held the king hostage for several hours. Later the Assembly voted to imprison the royal family. Elections were held. From now on all men of 21 years and above regardless of wealth, got the right to vote.

Q9. How did peasants protest against the feudal lords or nobles of France?

There were rumours that the landlords of the manor had hired some people to destroy the ripened crops. Being afraid of the situation, peasants in several districts seized hoes and pitchforks and attacked chateaux (castles belonging to the noblemen). They looted hoarded grain in the market. They had also burnt the documents containing records of the manorial dues. As the result, a large number of nobles fled from their homes and migrated to the neighbouring countries.

(i) Active Citizens: Only men above 25 years of age who paid taxes equal to at least 3 days of a labourer's wage were given the status of active citizens. Only they had the right to vote.(ii) Passive Citizens: Whereas, the remaining men as well as all the women of France who were not entitled to vote were called Passive Citizens.

Q11. What rights were provided by the French Constitution?

The Constitution began with a Declaration of the Rights of Man and Citizen. Rights such as the right to life, freedom of speech, freedom of opinion, equality before the law were established. These rights were considered natural rights, which belonged to each human being by birth and could not be taken away. It was the duty of the government to protect the natural rights of the citizens.

Q12. What do you know about the political clubs formed in France?

Large sections of the population believed that the revolution had to be carried further, as the Constitution of 1791 had given the rights only to the richer section. So, political clubs became important for the people who wished to discuss government policies and plan their own forms of action. The most successful of these clubs was the Jacobin Club. Women too formed their own clubs to get the right to vote.

Q13. What was a 'Directory'? Why was it removed from France?

After the fall of Jacobins, a new Constitution was formed which denied the right to vote to non-propertied men. It provided two elected Legislative Councils, who appointed a Directory, an executive made up of five members. However, the directors often clashed with the legislative councils and were finally dismissed. With this, political instability emerged in France which gave rise to a military dictator. Napoleon Bonaparte.

Q14. How did women suffer in France?

Most of the women had to work for a living. They worked as laundresses or seamstresses sold flowers, fruits and vegetables or were employed as domestic servants. They could not get an education or job training. Working women had also to take care of their families, that is cook, fetch water, queue up for bread and look after children. Their wages were also lower than men.

Q15. Which laws were made to improve the status of women in French society?

In the beginning, the revolutionary government introduced laws to improve the lives of women:

Q16. What was the immediate cause of the French Revolution?

A severe winter had meant a bad harvest, the price of bread rose, often bakers exploited the situation and hoarded supplies. After spending long hours in long queues at the bakery, crowds of angry women stormed into the shops. At the same time, the king ordered troops to move into Paris and on 14th July, the agitated crowd stormed and destroyed the Bastille.

Q17. What was Guillotine? How was it used?

Guillotine is a device consisting of two poles and a blade with which a person is beheaded. It was named after Dr. Guillotine who invented it. 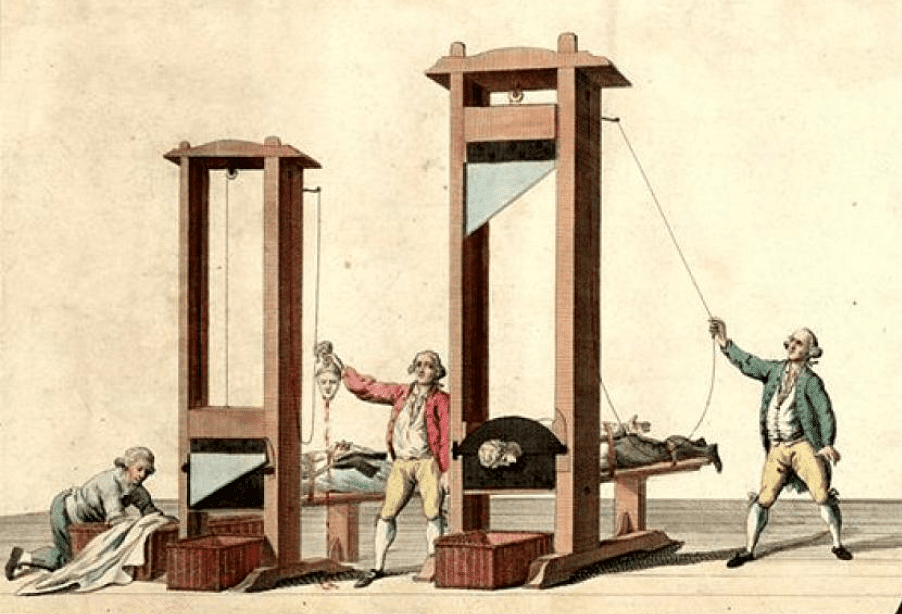 A Guillotine such as those used during the French Revolution.

It was used by Robespierre, who followed a policy of 'reign of terror' of severe control and punishment. Those who did not agree with his methods were arrested, imprisoned and then tried by a revolutionary tribunal. If the court found them guilty, they were guillotined.

Q18. How did the fall of Bastille prison become the immediate cause of French Revolution?

On the morning of 14th July 1789, the city of Paris was in a state of alarm. The king ordered his troops to move into the city. Rumours spread that he would soon order the army to open fire upon the citizens. Some 7,000 men and women gathered in front of the town hall and decided to form a people's militia. A group of several hundred people marched towards the eastern part of the city and stormed the fortress-prison, the Bastille. In the armed fight, the commander of Bastille was killed and prisoners released. Since the Bastille stood for the despotic power of the king, it led people towards the success of French Revolution.

Q19. How can you say that Louis XVI was a despotic ruler?

Louis XVI of Bourbon dynasty, ascended the throne in 1774. He was married to Austrian princess Marie Antoinette. When he became ruler, he found an empty treasury. Long years of war had drained the financial resources of France. Added to this was the cost of maintaining an extravagant court at the immense palace of Versailles. Louis XVI also helped American armies in their war of independence, which led to further rise to more than 2 billion livres debt. To meet its regular expenses, the state was forced to increase taxes. Nobles, clergy and rich men were exempted from paying taxes, it was the third estate which bore the brunt.

Subsistence Crisis: It is an extreme situation where the basic means of livelihood are endangered. The demand for foodgrains was increased as population had increased in France from 23 million to 28 million. The production of grains could not keep pace with the demand. So the price of bread, which was the staple diet of the majority, rose rapidly. Most workers were employed as labourers in workshops whose owner fixed their wages. But wages did not keep pace with the rise in prices. So the gap between the poor and the rich widened. Things became worse whenever drought or hail reduced the harvest. This led to subsistence crisis, something that occurred frequently in France during the Old Regime.

On 5th May 1789, Louis XVI called together an assembly of Estates General to pass proposals for new taxes. A resplendent hall in Versailles was prepared to host the delegates. The first and second estates sent 300 representatives each, who were seated in rows facing each other on two sides, while the 600 members of the third estate had to stand at the back. The third estate was represented by its more prosperous and educated members. Peasants, artisans and women were denied entry to the assembly.

Marseillaise was a patriotic song composed by poet Roget de L Isle. Although Louis XVI signed the constitution, he entered into secret negotiations with the King of Prussia. Rulers of the other neighbouring countries too were worried by the developments in France and made plans to send troops to put down the events that had been taking place there since the summer of 1789. Before this could happen, the National Assembly voted in April 1792 and declared war against Prussia and Austria. Thousands of volunteers thronged from the provinces to join the army. They saw this as a war of the people against kings and aristocracies all over Europe. So Marseillaise was sung for the first time by the volunteers from Marseilles as they marched into Paris and so got its name. The Marseillaise is now the national anthem of France.

Q23. Why do you think that a growing middle class in France envisages an end to the privileges?

Q24. What do you know about the triangular slave trade? What legislative measures were taken to end slavery in the French colonies?

The reluctance of Europeans to go and work in distant and unfamiliar lands meant a shortage of labour on the plantations. So this was met by a triangular slave trade between Europe, Africa and the Americas. The exploitation of slave labour made it possible to meet the growing demand in European markets for sugar, coffee and indigo.Legislative Measures:

Q25. What kinds of freedoms were granted to the citizens of France after French Revolution?